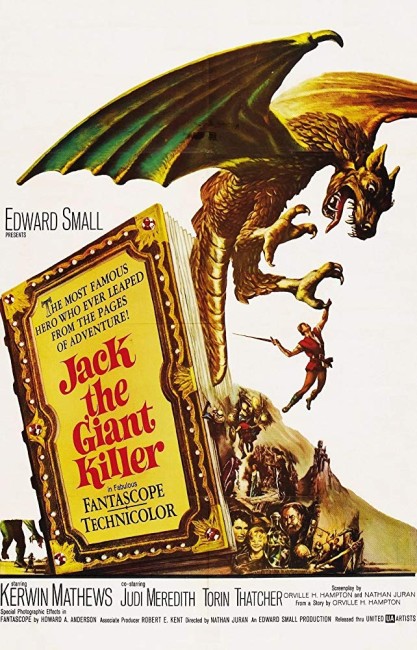 Embittered over his exile by the King of Cornwall, the sorcerer Pendragon sends Cornwall’s daughter Princess Elaine a living doll as a birthday present. However, when she opens it, the doll turns into a giant and abducts her. The abduction is foiled by the farmboy Jack who kills the giant. The king entrusts Jack with a secret mission – to take Elaine to the safety of a convent in France. However, Pendragon manages to abduct Elaine on the journey. Jack must brave Pendragon’s sorceries and rescue Elaine from Pendragon’s castle. Meanwhile, Pendragon has cast a spell that has turned Elaine into a witch.

Unfortunately for Jack the Giant Killer, the crucial figure it fails to bring back is Ray Harryhausen. What made The 7th Voyage of Sinbad was Ray Harryhausen’s stop-motion animation set-pieces. The stop-motion animation here has been conducted by Tim Barr, Wah Chang and Gene Warren, who sometimes collectively worked under the name Projects Unlimited. The effects give the impression of either being done by erratically talented amateurs or in a hurry.

The cormorant scenes are potentially well staged by Nathan Juran but the animation is jerky and the creature looks like a plasticine model, not an actual character in the way that Harryhausen crafted the cyclops. Similarly, the climactic flying dragon duel is well staged but fails to seem threatening because the dragon has a face like a cuddly puppy dog. The worst sequence is the amazingly shoddy battle between a two-headed monster and a giant octopus – the octopus looks totally amateurish, down about the level of Gumby. The most imaginatively staged and animated sequences are the witch attacks on the ship where the animation is hidden beneath a solarised glow to certain eerie effect.

There is also the unfortunate plot. A film like this – certainly one with the title like Jack the Giant Killer – should rest upon Jack’s heroism. It does occasionally during the cormorant and dragon set-pieces. However, the venture into the castle is one where Jack’s solutions the entire way are provided by a genii’s wave of the hand. A true hero should overcome obstacles with their own strength, intelligence or boldness, but this offers a cop-out where the solutions come with a flick of the plot. Torin Thatcher, who was effective in 7th Voyage, now looks aged and presents only a hammy cardboard threat.

To give Jack the Giant Killer credit, it tries hard and it at least has more imagination that some of the other 7th Voyage copies mounted around the time such as Captain Sindbad (1963) and the Italian Hercules films. There are some oddly effective fantastique touches – animal transformations, witch curses placed on women whose nature can only be seen in a mirror, the various challenges Jack must take to enter the castle, a corridor of arms emerging from a wall waving swords – an effect borrowed from Jean Cocteau’s Beauty and the Beast (1946).

This film is unrelated to and not to be confused with either the big-budget Jack the Giant Slayer (2013) or its cheap copy Jack the Giant Killer (2013).