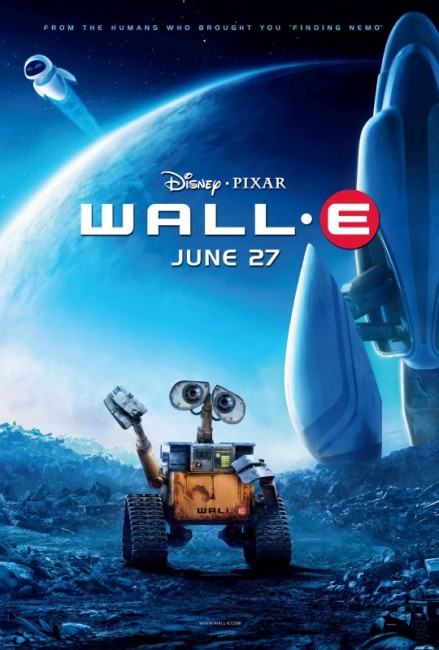 The 29th Century. Humanity has left Earth after it has become buried under mountains of junk. Wall-E (or Waste Allocation Load Lifter Earth-Class) is the last remaining of the robots left behind to compact the junk. Wall-E is lonely for companionship and sits in his container home watching battered video copies of old human movies. One day a ship arrives and leaves behind a smart, modern robot. Wall-E follows the other robot as it sets about scanning the debris. Eventually it spots him and a friendship between the two grows, it introducing itself as Eve. But when Wall-E shows Eve a tiny plant he has found, Eve immediately places the plant inside herself and goes into stasis. Wall-E is heartbroken and nothing he does is able to reawaken her. As her ship comes to pick her up, Wall-E follows by clinging onto the outside. The ship docks with the cruise liner Axiom. Aboard are numerous humans who have atrophied and become overweight due to spending all their time in low-gravity in hover chairs where robots do everything for them. The plant that Eve carries causes the captain to become aware of what Earth is. However, his plans to return home are endangered by the ship’s computer AUTO, which has orders to keep humanity in space for their safety. As Wall-E finds and revives Eve, AUTO brands them as fugitives.

With its incredibly soulful and expressive eye lenses, Wall-E instantly becomes one of the most endearing of anthropomorphic robots – imagine a mechanised combination of E.T. and Charlie Chaplin’s Little Tramp. There is something beautifully sad and melancholy about Wall-E’s journey through the deserted ruins at the beginning of the film, compacting the junk, finding a new set of treads for himself then hanging them up in his container, bringing back a Twinkie for the cockroach to inhabit, then retracting his extremities and putting himself on the shelf for the night. The climactic scenes where he is battered out of shape and then brought back to life, only to appear to have had his memory wiped are heart-breaking.

I am happy to go out on a limb and call Wall-E Pixar’s finest film to date. A considerable part of the charm of Wall-E is the fact that more than half the film comes without any dialogue, just sound effects. The two robots do talk after a fashion – but even then the ship’s computer’s dialogue has been created using the Macintalk text-to-speech program. As a result, almost the entire film is carried by the visuals and the sound effects, rather than speech. (Expectedly, Ben Burtt picked up another Oscar nomination for his work here). Indeed, in its emphasis on visual gags as opposed to dialogue, Wall-E is almost the modern equivalent of one of Buster Keaton or Charlie Chaplin’s silent comedies.

The film has an endless degree of visual invention. The visuals become especially charming during the romance between Wall-E and Eve – his tentative attempts to reach out and take her hand, the doleful/comic scenes of him wondering what to do after she goes into stasis – sitting on the pile of junk mournfully kicking his treads, holding an umbrella over her but getting jolted by a lightning bolt, trying to hold her hand as they sit watching the sunset only to get his claw trapped under her edges. There is a magical scene during the middle of the film with the two of them dancing around the outside of the ship in the void with Wall-E propelled by a fire extinguisher (even if the scene does require Wall-E to be making some unscientific curved turns in space).

The slapstick scenes running around the ship may be drawn out slightly longer than needed but have an amazing degree of charm and plain good-natured humour. As always in a Pixar film, the show is frequently stolen by the supporting characters – in particular, the cockroaches and a tiny cleaning steward bot that chases all over the Axiom cleaning up Wall-E’s trail of grime. As with any Pixar film, the quality of the animation is exquisite – the backgrounds of the junkyard future are stunning in their detail.

There is a modestly pro-environmentalist message underlying the film. What is also interesting about Wall-E is that contrary to almost every other film on machine-human relationships – from 2001: A Space Odyssey (1968) through The Terminator and The Matrix series – it does not create a black-and-white divide that says it is good to be human, bad to be machine and where the emotional climax of the story is the triumph of humanity over machine. Rather, humans have been atrophied by the convenience society to the point of being near-useless blobs and the robots become the unrecognised protectors of humanity and saviours of Planet Earth. However, this is perhaps more understandable a theme coming from Pixar – a company that created their own triumph of the mechanised in being able to make computer animation into a medium that came to supplant human-hand drawn animation and made characters produced inside a machine environment into some of animation’s most warmly appealing.

There are a great many 2001: A Space Odyssey references and in-jokes throughout – to the medbot with its single red eye just like HAL 9000 to the Also Sprach Zarathustra playing as the captain waddles out of his hover chair for the first time – and it is interesting to make contrast between the two. Stanley Kubrick saw that humanity had become dehumanised by its tools and machines and all that the future held was technology triumphant; Wall-E proceeds in similar directions but sees the future where the machines have taken over as less threatening and in fact takes the side of the machines. Andrew Stanton sees the problem as not so much a case of machines overrunning the world but of humanity being trapped inside the convenience and consumerist society – even the Earth has become uninhabitable after being overrun by the throwaway junk of human society. (Pixar are not above including themselves in such criticisms of the disposable consumer society – there is one of the Pizza Planet trucks from Toy Story amid the junk, while Wall-E watches his films on an I-Pod, which is of course produced by Pixar CEO Steve Jobs’ Apple Computers). The answer however is a less bleak one than what Stanley Kubrick saw – simply that of people being able to get up and walk again and allowing plants to flourish in soil.