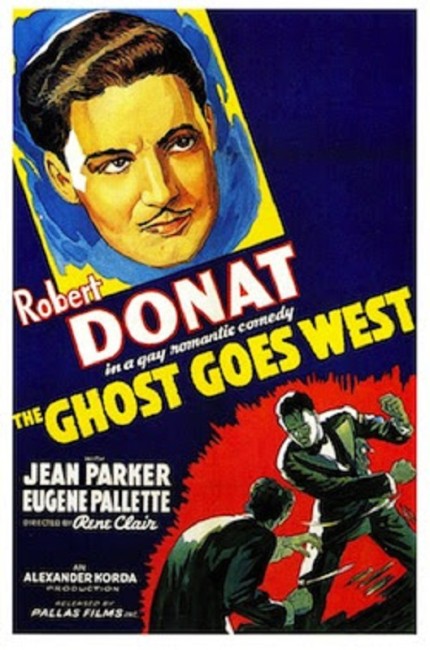 In the 18th Century, the Glourie clan are called cowards by their rivals, the MacClaggan clan, for not going off to war with the English. The womanising Murdoch Glourie is reluctantly bundled off, only to be blown up on the battlefield while stealing a kiss from a girl behind a barrel of gunpowder. Murdoch’s father refuses him admittance to Heaven for his cowardice and curses him to walk the halls of Glourie Castle after midnight until he can trap a MacClaggan and make him admit that one Glourie is better than fifty MacClaggans. Two hundred years later and the latest Glourie descendant Donald is being forced to sell the castle to pay off his debts. He tries to hide the existence of Murdoch’s ghost from prospective buyers. Peggy Martin, the daughter of an American millionaire, meets the ghost of Murdoch in the halls of the castle and becomes entranced. She persuades her father to buy the castle and ship it to America where Murdoch causes a sensation.

French director Rene Clair (1898-1981) gained acclaim through a number of striking experimental and surrealist films during the silent era. Into the sound era, Clair abandoned such experiments for more commercial films. The Ghost Goes West was Rene Clair’s first English-language film, where he went to England to work under movie mogul Alexander Korda, the producer of Things to Come (1936) and The Thief of Bagdad (1940). Rene Clair made one further film in England, Break the News (1938), and then moved to Hollywood.

The visual flair of Rene Clair’s silent films is something that has necessarily been dampened by his move towards a more commercial form. There is a certain wry sense of humour to the proceedings in The Ghost Goes West – like the image of a group of Scottish debtors forced to act as waiters.

The Ghost Goes West more than likely drew its inspiration from Oscar Wilde’s short story The Canterville Ghost (1887) and its witty contrast of a ghost trying to go about the business of spooking people up against unflappable American vulgarity. There are similar contrasts here – like the amusing image of palm trees planted around the translocated castle and a brass band posing as Scots. (The later film version of The Canterville Ghost (1944) draws its inspiration as much from The Ghost Goes West as it does from the Wilde story).

For all that, The Ghost Goes West is not a terribly great film. It is easy and middle of the road in its humour and lacks the frothy drollness of Rene Clair’s later Hollywood fantasy, the sublime I Married a Witch (1942). It was popular in its day though. Robert Donat, sometimes forgetting his Scottish accent altogether, suffers from an overly coy cuteness.

Rene Clair’s other genre films were the surrealist silent films Entr’acte (1924) and The Imaginary Voyage (1925); the silent sf film Paris Qui Dort (The Crazy Ray) (1925) about Paris frozen in time, I Married a Witch (1942) about a witch falling in love with a mortal; It Happened Tomorrow (1944) about a man who can read tomorrow’s headlines; the Agatha Christie murder mystery And Then There Were None (1945); Beauty and the Devil (1950), a retelling of the Faust story; and Beauties of the Night (1952) a charming fantasy about a daydreamer.