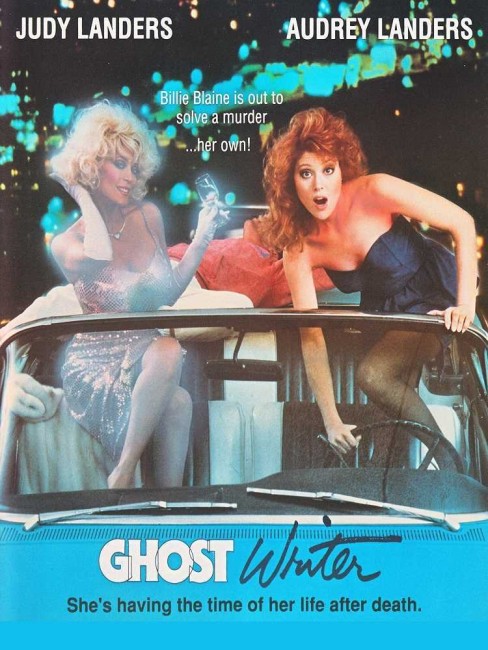 Angela Reid, a journalist for Hollywood Beat magazine, goes to stay at her aunt’s Malibu beach-house to work in peace and quiet. There the ghost of Billie Blaine, the previous owner, an actress who drowned after taking an overdose on barbiturates in 1962, appears to her and the two strike up a friendship. Angela decides to interview Billie and write up her memoirs for the magazine, pretending they are extracts from a diary that she found. However, this attracts the attention of Billie’s murderer, a former mobster who is now running for public office, and comes determined to silence Angela.

There is not much of a film with Ghost Writer. The comedy falls slackly and without any real humour, certainly no energy. Although it has a grudging likability, which, one supposes for a film with so few expectations, is doing fairly well. Some rather flimsy invisibility gags are pulled.

Audrey Landers, best known as a regular on tv’s Dallas (1978-91), is like a sexier but more vacant Shelley Long – she doesn’t have much talent and the film does a fair job in covering this up. Her younger sister Judy has even less talent, which the film, in an inspired piece of casting, covers by getting her to play an actress with no talent.

The other performances are only distinguished by their sheer badness – like the geekishly annoying playing from Joey Travolta, one can understand why he never entered the superstar category his brother did (these days he directs low-budget direct-to-video comedies); and from the bodybuilders, the appropriately named the Barbarian Brothers – up until I saw this film I thought the cliche about the bodybuilder who couldn’t put two words together or walk straight was a joke.

The film was co-produced by David DeCoteau, the director responsible for a lot of bad genre films – Creepozoids (1987), Sorority Babes at the Slimeball Bowl-o-Rama (1987), Beach Babes from Beyond (1993) and Voodoo Academy (2000). Kenneth J. Hall had previously directed the cheap Evil Spawn (1987) and would go onto write lots of bad films for Charles Band that were directed by DeCoteau, including Dr Alien/I Was a Teenage Sex Maniac (1988) and Test Tube Teens from the Year 2000 (1994).