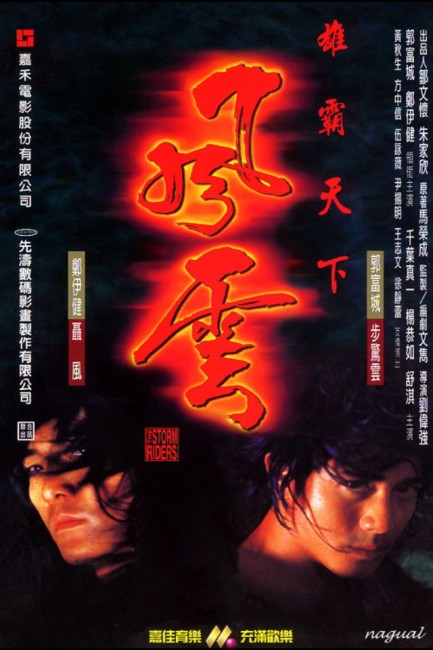 The fierce clan leader Lord Conquer determines to defeat the land’s most skilled fighter Sword Saint. The Mud Buddha prophesies that the fight will not take place for ten years. Lord Conquer sets about obtaining the ten swords of great power. According to the prophecy, Lord Conquer adopts Cloud and Wind, the sons of two of the slain sword-holders and raises them as his heirs. Cloud falls in love with Conquer’s daughter Charity but when Conquer announces her betrothal to Wind, Cloud steals her away. However, she is accidentally killed by Conquer as Cloud and Wind fight over her. Cloud swears vengeance against his adopted father.

Hong Kong’s Wu Xia cycle contains some of the most exciting fantasy being made anywhere in the world. Wu Xia grew out of the kung fu and martial arts films of the 1960s and 70s. The film that began the cycle is generally credited as being Zu: Warriors from the Magic Mountain (1983) but it was A Chinese Ghost Story (1987) that carried it to a crossover success in the West. This was followed by many similar films including Mr Vampire (1985) and sequels, Swordsman (1990) and sequels, Saviour of the Soul (1991), The Bride with White Hair (1993), Green Snake (1993) and numerous others, before the colossal breakthrough success of Crouching Tiger, Hidden Dragon (2000). The cycle regularly celebrates dizzying melee sequences where combatants exchange sword blows and kicks to the head in mid-air and travel by bouncing off trees or dancing along blades of grass while battling demons and ghosts with paper prayers and feng shui enchantments.

The Storm Riders emerges as some epic of the genre. The plot is based on a Hong Kong comic-book Fung Wan (1989– ), which was published in twelve volumes in English translation, Jand comes in at a mammoth 127 minutes (which may not be an extravagant length for a film but is marathon length when one considers the pace at which Hong Kong fantasy/action moves). With the scant attention usually paid to plot by these films, the sweeping canvas that The Storm Riders draws itself across immediately raises the level of expectation. Even condensed from the original multi-story epic, The Storm Riders contains enough plot to fuel another entire trilogy of Star Wars films for George Lucas. In all regards, The Storm Riders tries to be epic – it has a budget far greater than most Wu Xia films, allowing the construction of huge-scale indoor and outdoor sets and entire villages and cities.

The Storm Riders also marks a point where Hong Kong cinema appeared to discover digital effects. Unlike many Western digital effects films where the effects are the end in themselves, here they are merely the tool for the furtherance of the otherwise dramatically intense action (notably an excellent battle with a fire dragon or a sequence where the camera conducts breathtaking sweeps around sword combatants on the head of a giant Buddha statue).

There is all the usual enthralling fantastique stuntwork and fight sequences – power blasts, flying sword combat, swordfights with bamboo stalks, a climactic fight with one warrior dancing across the heads of a roomful of people frozen in position and characters sweeping aside hundreds of arrows fired at them with one hand.

The Storm Riders also imports classical Japanese actor Sonny Chiba who gives a grandly theatrical performance as the lead villain. As Wind, Ekin Chang seems far too baby-faced and bland to be the superhero the film requires but Aaron Kwok, with blue-dyed black hair, plays to all the wonderfully pouty, brooding postures of the adolescent manga hero, which director Andrew Lau is more than happy to accommodate, posing him atop rooftops outlined against coloured storm clouds and the like.

Storm Warriors (2009) was a sequel made by the Pang Brothers, featuring return performances from Aaron Kwok and Ekin Cheng. The same comic-book had earlier been adapted to the screen as the tv series The Storm Riders (1988-90).