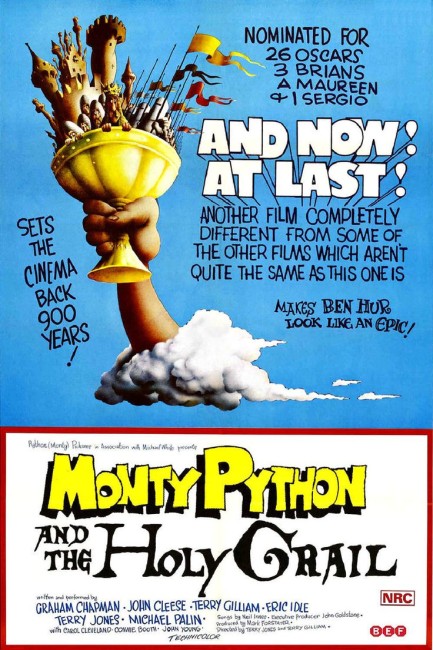 King Arthur and his man-at-arms wander through England trying to find knights to join them on a quest. After eventually succeeding in doing so, God directs them to find the Holy Grail. However, their quest proves to be beset by bizarre temptations and perils.

Monty Python’s Flying Circus (1969-74) is considered one of the great comedy tv series of all time, if not in the minds of some fans and several tv polls on the subject, the greatest comedy show of all time. Monty Python consisted of six members – Graham Chapman, John Cleese, Terry Gilliam, Terry Jones, Eric Idle and Michael Palin. The series began after the BBC offered Cleese and Chapman, two colleagues who had met at Cambridge University and worked in student comedy revues and then moved onto stage and tv, the opportunity to create their own series. Cleese did not want to work on his own and so brought in Michael Palin, with whom he had worked before. Palin then brought in Terry Jones, a classmate from Oxford, as well as Eric Idle, another compatriot from when all three had worked on another comedy tv series Do Not Adjust Your Set (1968-9). Also brought in was the American Terry Gilliam, who had also worked on Do Not Adjust Your Set, after the group found an admiration of his bizarre animations. Various stories exist as to who came up with the name Monty Python’s Flying Circus. It is generally believed that the ‘flying circus’ aspect appealed out of the sheer surrealism of the image and that John Cleese added the name Monty Python because he wanted to suggest that it was owned by a dodgy individual.

The Monty Pythons created a form of comedy that was uniquely their own. Indeed, the term ‘Python-esque’ has been loosely coined to describe their humour, as there were no antecedents. The Pythons were certainly influenced by the surreal absurdism pioneered by the Goon Show and Spike Milligan. Gags were bizarre in nature – the credits would roll halfway through the show or characters would invade other sketches and there was an obsession with skewering the British class system and its ability to remain deadpan through the most bizarre of happenings. One of the most surreal features of the show was Terry Gilliam’s low-budget animations using cut-out photographic montages involving giant feet and ambulatory buildings. Everybody shouted a lot, wore funny costumes and dressed up as middle-aged women who talked in falsettos and there seemed a great many pompous bowler-hatted and military figures.

The more traditional members of the audience were taken aback at the series’ often biting sense of absurdist humour but Monty Python’s Flying Circus soon gained a fanatical following. Some of their skits – the dead parrot sketch, the argument clinic, the Ministry of Silly Walks, The Lumberjack Song, The Spanish Inquisition – have gone on to become classics and hardly a university student party goes by without some impromptu Monty Python recitation. At their worst, the Pythons’s were merely silly but at their best they have a black zaniness and intellectual form of humour that can be riotously funny. They have become justly legendary.

The Pythons emerged out onto film with And Now For Something Completely Different (1973), a potted reworking of some of the more popular sketches from the tv series, although the film is hardly seen today and is not properly counted among the Python filmic canon. Monty Python and the Holy Grail was the first of the original Monty Python features and the point where the Python members themselves took creative control over the films. They would go on to make two other films under the Monty Python banner – the hilarious Christian satire Monty Python’s The Life of Brian (1979) and Monty Python’s The Meaning of Life (1983), another anthology of various skits – before each of the members went their own separate ways. Although several of the troupe did reunite several years later to provide voice work for the animated biopic A Liar’s Autobiography: The Untrue Story of Monty Python’s Graham Chapman (2012).

Monty Python and the Holy Grail is not as successfully sustained as the Monty Python’s crowning glory that was The Life of Brian. Holy Grail nevertheless holds a series of deliriously surrealistic gags. Everyone remembers John Cleese as the Black Knight having his legs and arms chopped off in wild gouts of blood, while insisting “It’s only a flesh wound” and that his opponent keep on fighting – a scene that seems intended as a direct parody of Robert Bresson’s Lancelot du Lac (1974). There is the encounter between King Arthur and the peasants who complain about their oppression in Marxist dialectic – “I didn’t know we had a king – I thought we were an autonomous collective … You can’t expect to wield supreme executive power just because some watery tart threw a sword at you.”

There are a host of uproariously silly throwaway gags – the animation sequence that stops when the animator keels over dead from a heart attack; the killer rabbit and the Holy Hand Grenade of Antioch – “And the Lord spake saying, first shalt thou take out the Holy Pin … Then, shalt thou count to three. No more, no less. Three shall be the number thou shalt count, and the number of the counting shall be three. Four shalt thou not count, neither shalt thou count to two”; the images of Arthur and Patsy travelling through the countryside while clopping coconuts as horse’s hooves (an act of creativity that came about because the budget didn’t extend to hiring horses). The opening credits feature a good many gags about moose and llama and then the announcement of the firing of the people responsible for the gags, as well as noting that “the characters and incidents portrayed are entirely fictional – signed Richard M. Nixon”.

There are one or two sequences that seem a little silly – the witch burning, the temptations at Castle Anthrax, the scene with the two idiot guards misinterpreting instructions – but mostly Monty Python and the Holy Grail is extremely funny. The main complaint that one might make is that Holy Grail never assembles together into a plot, it is more a series of gags in Mediaeval setting. The film reveals its unevenness in the anti-climactic ending, which breaks down the fourth wall and has the police arrive and arrest everybody. It is an ending that seems there more to bring the film to a halt and seems a failing of the gags, chiefly as set-pieces, to ever amount to a satisfactory dramatic structure.

In 1996, Monty Python and the Holy Grail was turned into a videogame and then a highly successful Broadway musical Spamalot (2005), written by Eric Idle and directed by Mike Nichols of The Graduate (1967) and Angels in America (2003) fame. This won a Tony Award for Best Musical.

The Monty Pythons seem to have a fascination with skewering classical heroic sagas and/or emphasising the dirt and filth of the Mediaeval Ages. Straight after this, Terry Gilliam went on to direct Jabberwocky (1977), which could almost take place in the same universe as Monty Python and the Holy Grail, and is a darkly funny take on the knightly quest that again satirises the squalor of the period. A constant thread runs through almost all of Terry Gilliam’s films as director – Jabberwocky, Time Bandits (1981), The Adventures of Baron Munchausen (1989), the modern Grail quest The Fisher King (1991), The Brothers Grimm (2005) and The Man Who Killed Don Quixote (2018) – of taking familiar heroic sagas and revealing the characters that inhabit them to be flawed heroes. Co-director Terry Jones also later went on to direct Erik the Viking (1989), which applied the same sense of flawed heroism to the Norse myths.

Co-directors Terry Gilliam and Terry Jones both later went on to distinguished careers as directors. Terry Gilliam made Jabberwocky, Time Bandits, the dystopian black comedy Brazil (1985), The Adventures of Baron Munchausen, The Fisher King, the time travel film Twelve Monkeys (1995), the Hunter S. Thompson adaptation Fear and Loathing in Las Vegas (1998), The Brothers Grimm, Tideland (2005), The Imaginarium of Doctor Parnassus (2009), The Zero Theorem (2013) and The Man Who Killed Don Quixote (2018). Terry Jones directed all the other Monty Python films, then went solo with Personal Services (1986) about a British madam, Erik the Viking and an adaptation of The Wind in the Willows (1996). Jones has also scripted the Jim Henson fantasy Labyrinth (1986) and the English language adaptation of Asterix and Obelix vs Caesar (1999), as well as writes various children’s books. Graham Chapman went onto write the pirate comedy Yellowbeard (1983) and made various comedy appearances before his death in 1989. John Cleese has written two comedies, which he also appeared in, the highly successful A Fish Called Wanda (1988) and Fierce Creatures (1997), as well as the animated The Croods (2013), and has made a career in various acting roles, both comedic and serious, in films such as Silverado (1985), Clockwise (1986), The Jungle Book (1994), Mary Shelley’s Frankenstein (1994), The Swan Princess (1994), George of the Jungle (1997), Rat Race (2001) and The Day the Earth Stood Still (2008), as well as playing ongoing roles as Q’s successor R in the James Bond series beginning with The World is Not Enough (1999), as the headless ghost in the Harry Potter films and the voice of the king in the Shrek series, plus numerous parts in various of the other Python member-directed films. Eric Idle went on to create the tv special The Rutles: All You Need is Cash (1978), which spoofed The Beatles, and wrote the film Splitting Heirs (1993). Idle has made numerous acting appearances in Around the World in 80 Days (mini-series, 1989), Nuns on the Run (1990), Mom and Dad Save the World (1992), Casper (1995), An Allan Smithee Film: Burn, Hollywood, Burn (1997), Quest for Camelot (1998), Dudley Do-Right (1999), 102 Dalmatians (2000) and Ella Enchanted (2004), among others. Michael Palin makes occasional acting appearances in other Monty Python films, most notably Cleese’s A Fish Called Wanda, but these days is better known for writing and fronting various BBC travel documentaries including Around the World in 80 Days (1989), Pole to Pole (1992), Full Circle (1997), Hemingway Adventure (1999), Sahara (2002), Himalaya (2004) and New Europe (2007).