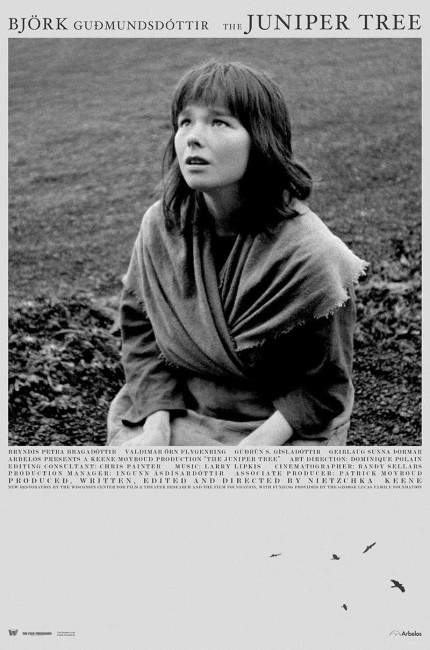 The farmer Johan returns home with a new wife Katla, along with her sister Margit. The two sisters have been rendered homeless after the death of their parents. Johan’s son Jonas refuses to accept Katla as a substitute for his mother. He befriends Margit but there is growing tension as he rebuffs any overture from Katla and accuses her of being a witch.

The Juniper Tree was the debut film from US director Nietzchka Keane (1952-2004). Keene had an interest in linguistics and served as a research assistant specialising in Old Icelandic to an archaeologist studying Scandinavian history. She also had an interest in film and raised the money to shoot The Juniper Tree in Iceland in 1986 on a miniscule budget. Due to difficulties with financing, the film was not completed until 1989 where it premiered at the Sundance Festival. It toured several festivals but languished in obscurity until it was given a digital restoration and arthouse re-release in 2019. Nietzchka Keane made two other films with Heroine of Hell (1996) and the posthumously released Barefoot to Jerusalem (2008), neither gaining a wide profile. Keane died of cancer in 2004.

In retrospect, the biggest interest The Juniper Tree holds is that it stars the singer Björk who appears under her birth name Björk Guðmundsdóttir. Björk was 21 years old at the time she shot the film and it was her first acting appearance – the only other acting venture she ever went on to make was the lead in Lars von Trier’s Dancer in the Dark (2000). At the time, Björk was trying to make it as a singer. She had recorded her first album back in 1977 at the age of eleven and been in several other bands – indeed, she formed her first major band The Sugarcubes around about the same time as The Juniper Tree was shooting. However, her international success would not come until she moved to London in the early 1990s and then released her hit first album Debut (1994).

The film is based on a fairytale The Juniper Tree (1812) by The Brothers Grimm concerning the rivalry between a stepmother and stepson, culminating in the stepmother killing the son and feeding his cooked body to the husband. Nietzchka Keane was shooting with a miniscule budget. As a result, much of the film is exteriors and only a few set inside Johan’s hut.

The problem with the way that Nietzchka Keane shoots is that it leads to the least interesting telling of the fairytale possible. The film is all slow scenes watching the characters interact and go about their everyday business. There is no real plot and nothing much happens – just the building jealousy and resentment of the intruder to the household by young Jonas. The pace is slow and undramatic, more interested in depicting everyday life than any of the drama in the story. This is the sort of film that regularly gets served up at international film festivals under the assumption that dull, minute depiction of the lives of peasant peoples is culturally significant.

A reading of the original Brothers Grimm story heads into full-on horror territory but Nietzchka Keane delivers nothing that ever approaches that. We got the odd appearance of Björk’s ghostly mother. Things pick up somewhat towards the end where Bryndis Petra Bragadottir inspires Geirlaug Sunna Þormar by telling him that if his mother protects him he should fly off the cliff and then her serving the broth of forgetfulness, before the show fairly much returns to the way it was and ends on irresolution.