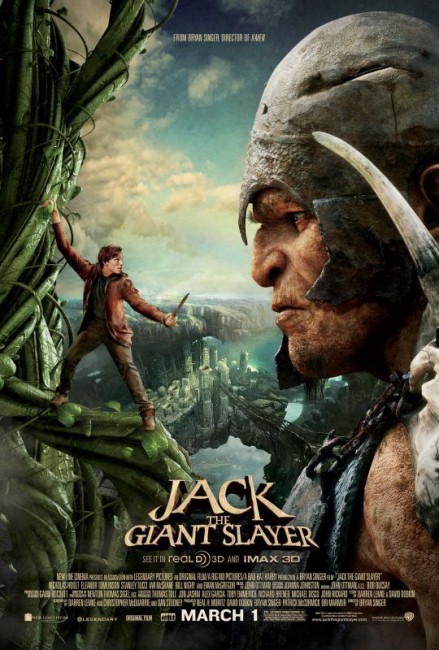 As a child growing up in the kingdom of Cloister, Jack loves the stories of the giants and the legend of how they were driven back to their home in the clouds by King Erik who fashioned a crown smelted out of slain giant’s hearts to control them. Now as an adult, Jack is asked to go to the market by his uncle. There he intervenes to stops ruffians harassing a pretty girl, only to find that she is the Princess Isabelle. He then meets a monk who persuades Jack to swap his horse for a handful of beans (which the monk has stolen from the palace). Jack’s uncle is angry at this. Meanwhile, Isabelle refuses her father’s plans to marry her to Lord Roderick and flees the palace. As rain comes, she seeks refuge at what turns out to be the cottage where Jack lives. However, the rain causes the beans to sprout and Isabelle is swept up on the giant beanstalk as it heads up into the clouds. In the morning, the king comes and Jack insists on joining an expedition of several knights, including Elmont and the scheming Roderick, as they climb the beanstalk to save Isabelle. They find themselves in the kingdom of giants. With most of the other knights slain, Jack sets out to rescue Isabelle singlehandedly. Meanwhile, Roderick has produced the crown of Erik and uses it to command the giants to his bidding, intending to travel down the beanstalk and use them to overthrow the kingdom.

Exactly a decade ago, Bryan Singer enjoyed the fannish superstardom as a director that Christopher Nolan now inhabits. Singer had gained a great deal of kudos for his debut with the thriller The Usual Suspects (1995), followed by the Stephen King adaptation Apt Pupil (1998). However, it was with the fanboy hit of X-Men (2000) and its sequel X2 (2003) that Singer’s star rose to great acclaim. But suddenly things started to go wrong. Singer next went onto make Superman Returns (2006), a great film – Singer’s best film in this author’s opinion – but one that is inexplicably regarded as a bad movie. Singer failed to recover from this with Valkyrie (2008), which starred Tom Cruise as a real-life Nazi and ended up being ridiculed off the screen to box-office disappointment. Singer has been associated with a great many other works, including touted big-screen remakes of Battlestar Galactica (1978-9) and Excalibur (1981) but the only of these to emerge was Jack the Giant Slayer, followed a few years later by Bohemian Rhapsody (2018), a troubled production that had Singer fired. Singer’s best work during this time may well have been the one where he kept an invisible presence – as executive producer of the tv series House M.D. (2004-12). As though in need of regaining some standing, Singer made a return to familiar territory as producer on X: First Class (2011) and subsequently went back to the director’s chair of the series with X-Men: Days of Future Past (2014) and X-Men: Apocalypse (2016).

Jack the Giant Slayer gave all appearance of being a production that the studio didn’t care about. Trailers went out in 2012 and looked terrible. The film was yanked from release schedule in mid-2012 and ping-ponged around various dates. Just prior to release, the title was suddenly changed from Jack the Giant Killer to Jack the Giant Slayer for reasons that probably only make a difference to the publicity department. The thing it was almost impossible to realise until the most recent trailer went out is that Jack the Giant Slayer is a version of the fairytale Jack and the Beanstalk, which was first written down in 1807 by Benjamin Tabart. Going by its original title, one made the assumption that the film was actually a remake of Jack the Giant Killer (1962), which in itself was based on a similar Old English folk tale about a giant-slaying peasant boy that is thought to be the original basis of the more familiar version.

The surprise about a script from so many writers of divergent backgrounds and a publicity department that does everything to downplay that the film is an adaptation of Jack and the Beanstalk is just how traditional a version of the fairytale that the film ends up being. There is Jack, the simple-minded peasant boy who naively trades the horse for beans; the journey up the beanstalk; the giants chanting ‘fee fi fo fum’ and so on. Certainly, the film pads out and expands some of this. There are knights accompanying Jack up the beanstalk; there is a human villain added to the piece; there is a princess that needs rescuing (something that has been added in several other film versions); the fantasy McGuffin of a magic crown that can control the giants; and the extended climax of the film has the giants coming down the beanstalk and mounting an attack on the king’s castle.

Much of this seems principally there in order to pad Jack and the Beanstalk out as an epic fantasy in much the same way that Snow White and the Huntsman expanded the basics of the original fairytale out into a fantasy adventure akin to The Lord of the Rings. The surprise though is, when boiled down to it, how traditional a telling of Jack and the Beanstalk the film ends up being. There is not anything that subverts, substantially rewrites, gives alternate explanation to or darkens the fairytale as we have had in the abovementioned and other modern fairytale retellings.

I was disappointed with Jack the Giant Slayer. This is a film from Bryan Singer who was once seen as the great white hope of fanboy cinema. Instead, Singer delivers a film that is exactly what we expect it to be. There are no unexpected surprises, no hidden depths – everything unfolds exactly as we expect it would when we sat down to watch the film – the villain gets his comeuppance, Jack singlehandedly defeats the giants, saves the kingdom and gets the girl. The production is lavish and dramatic in all the places it should be. There is a dash of humour and a smidgen of romance. Singer mounts a dramatic and spectacular special effects-driven climax as the giants attack the castle. It is just that Jack the Giant Slayer is never anything more than that. It feels exactly like an effort that could have been handled by a novice journeyman hired by the studio and kept on a tight leash with everything in the script massaged to suit middle-of-the-road focus group tastes. Though Bryan Singer has shown great creativity, visual flair and intelligence in his other films, he never allows any of that to emerge here.

The film’s release has cannily coincided with the rise of star Nicholas Hoult, now suddenly a hot name as a result of the modest hit of Warm Bodies (2013). (It is surprising how much of a ringer that Nicholas Hoult is for Bryan Singer – cast Singer with someone twenty-five years younger and Hoult would bear an uncanny resemblance). The unknown Eleanor Tomlinson looks pretty – especially when she manages to change into a suit of gold armour in the thirty seconds it takes Nicholas Hoult to walk out of a tent – but never gets to do a great deal. The rest of the cast is filled out with a great many names from British equity, most of whom you don’t immediately recognise behind absurdly unconvincing wigs or pieces of facial hair.