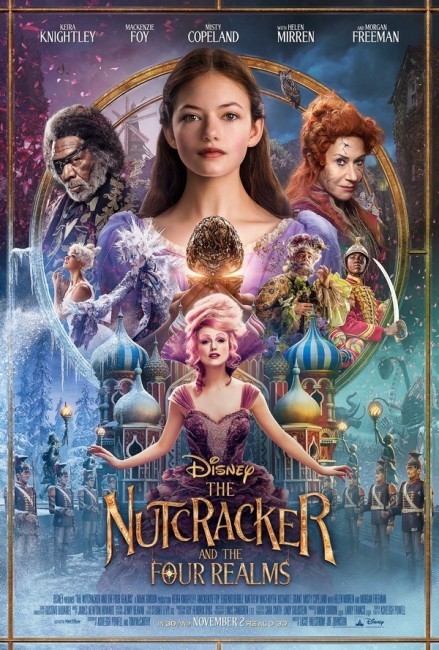 It is Christmas Eve in Victorian London. Clara Stahlbaum’s father gives each of the children presents that were left by their late mother. Clara’s present is an elaborately crafted egg but she finds there is no key to open it. They all go to a ball where Clara wanders away and finds herself in another realm. There she finds the key to the egg only for it to be snatched by a mouse. As she pursues it, the mouse assembles into a horde but Clara is saved by the guard captain Phillip Hoffman. He takes her to the Fourth Realm where Clara learns that her mother was queen and with her passing it means that Clara has now inherited the crown. The kingdom is under threat by Mother Ginger and the mouse hordes. Sugar Plum, queen of the Land of Sweets, explains that Clara’s mother left a machine that could win the war but they need the key to operate it. Clara leads the soldiers to retrieve the key from Mother Ginger but does not realise that Sugar Plum only wants to use it to activate the machine and create an army of tin soldiers to conquer the Four Realms for herself.

The Nutcracker and the Four Realms was a prestige production for Disney released on Christmastime 2018. There it ended up receiving only mediocre reviews and proved to be a flop for them, earning back $54 million on a $120+ budget. (It was dumped to home media only a month after being released to theatres).

The film is based on The Nutcracker and the Mouse (1816) by German fairytale author E.T.A. Hoffman, The original story tells of a girl who receives a nutcracker toy as Christmas present and how it comes to life to battle an army led by the Mouse King. The fairytale’s real fame came with the ballet adaptation The Nutcracker (1892) by Pyotr Tchaikovsky, which considerably elaborates on the story – Tchaikovsky adds the Sugar Plum Fairy and the visit to the Land of Sweets. There have been a number of filmed versions prior to this with the anime The Nutcracker Fantasy (1979), the Canadian animated The Nutcracker Prince (1990), Barbie in The Nutcracker (2001), while it was also used in one of the segments of Disney’s Fantasia (1940), while in live-action there was Nutcracker: The Motion Picture (1986) and The Nutcracker in 3D (2010).

After initial shooting completed, Hallstrom was unavailable for a required month of reshoots and so Joe Johnston, the former ILM production designer who directed the likes of Honey, I Shrunk the Kids (1989), Rocketeer (1991), The Pagemaster (1994), Jumanji (1995), October Sky (1999), Jurassic Park III (2001), Hidalgo (2004), The Wolfman (2010) and Captain America: The First Avenger (2011), stepped in to finish the shoot. In contrast to usual Hollywood egos, Hallstrom and Johnston agreed to share directorial credit rather than fight it out in arbitration.

When it comes to the film, the fairytale serves to provide little more than a title. We do get the opening with the Stahlbaum children receiving their Christmas gifts. There are assorted characters from the original like Mother Ginger, Drosselmeyer, The Mouse King and The Sugar Plum fairy (although Tchaikovsky does not have her as the villain). The story has been uprooted from its Germanic origins and relocated to Victorian London (despite which the characters still retain German names).

Perhaps the oddest thing about the film is that despite the title, The Nutcracker is of no longer of any relevance. In the original Hoffman story, it was a nutcracker, a traditional German toy designed to crack nuts, who comes to life. Here there is the equivalent of the guard captain Phillip – for no apparent reason, he is called a nutcracker at one point, however the significance of the toy has been entirely omitted from the film. Performances from the Tchaikovsky ballet have been incorporated in one scene and over the end credits.

Disney has thrown everything at The Nutcracker and the Four Realms in the design, costuming and visual effects departments in an attempt to impress. This becomes immediately apparent from the opening as the 3D camera moves across Christmas-time Victorian London, through the streets and down among ice skaters on a frozen-over river to arrive at the Stahlbaum house where the interiors dazzle with decorous bric-a-brac.

This becomes even more the case when Mackenzie Foy enters through into the Four Realms where even the frozen forests are a beauty, the castle amazes with hallways and throne rooms running off into perspective, Mackenzie Foy rides up on giant waterwheels, while looking spiffing outfitted in her military uniform.

The effects team have a field day with a horde of mice that transform into a human figure, a giant Helen Mirren automaton and armies of tin soldiers brought to life. There is the highly appealing image of a troupe of tumblers that are like Russian dolls that emerge from inside each other. It is a film worth watching for the sheer gorgeousness of the visuals in themselves.

On the other hand, The Nutcracker and the Four Realms is incredibly lightweight as a fantasy film. The story feels a paper-thin one that had been vastly over-produced. Stripped down of all the over-ornamentation, it would have been a story at best suited as an animated video-released film for the single digit age group. There is never anything of depth as a story to the film that adults can engage in. There is never anything that dramatically drives the film beyond it moving from one beautifully arranged set-piece to the next. Which in the end makes it a pretty but dull confection.