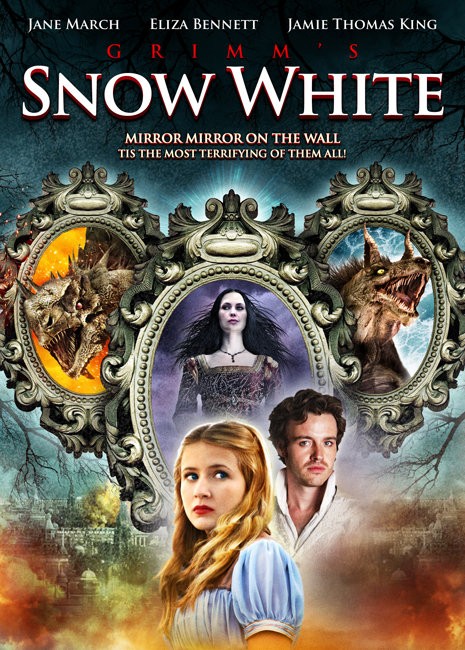 The King of Westfell is killed by the giant lizards when he crosses the border into neighbouring Northfalia on a hunting expedition. With him dead, the treaty between the two kingdoms starts to fall apart. Alexander, the prince of Northfalia, goes to propose marriage to the king’s widow Gwendolyn but she rejects him, claiming to still be grieving. Alexander then meets Gwendolyn’s stepdaughter Snow White and the two are instantly attracted. The queen has a magic mirror that is powered by shards of crystal containing elements of the mythical Viridian Flame that is guarded by the elves. When the mirror tells the queen that Snow White is more beautiful than she, Gwendolyn orders her taken into the forest and killed. However, the elves save Snow White from the queen’s huntsmen. They grant her refuge, although dislike sheltering one of the humans that have persecuted them. When the mirror tells the queen that Snow White is still alive, she sends her men into the forest to kill Snow White, while also using elven magic to make Prince Alexander marry her.

2012 was the year where movie screens saw a sudden flood of adaptations of Snow White. There were two competing new cinematic versions of the fairytale, firstly with Tarsem Singh Dhandwar’s Mirror Mirror (2012) starring Lily Collins and Julia Roberts and then with Snow White and the Huntsman (2012) starring Kristen Stewart and Charlize Theron.

The Asylum’s films are always timed to come out at the same time as their more famous soundalike counterpart and capitalise on the advertising campaign to fool people into thinking they are seeing the other film. Grimm’s Snow White was released two weeks before Mirror Mirror. The Asylum went on to make several other fairytale adaptations that went into release at the same time as various others amongst the early-2010s fad for adult fairytale retelings, including Hansel & Gretel (2013), Jack the Giant Killer (2013), Sleeping Beauty (2014) and Little Dead Rotting Hood (2016).

In many ways, Grimm’s Snow White is a more authentic version of the fairytale than either of the other two film versions of 2012. The other films alter the original in various ways – Mirror Mirror gave everything a bizarrely campy interpretation, while Snow White and the Huntsman tried to turn it into an epic fantasy adventure. By comparison, Grimm’s Snow White conducts a more traditional telling. Like Mirror Mirror, we get the addition of a love triangle between Snow White, The Queen and Prince Charming where he and Snow White fall for one another and the Queen wants to dispose of her and marry him for political convenience, using magic to manipulate his feelings.

The film also takes the idea used by both Mirror Mirror and Snow White and the Huntsman of Snow White falling in among the disenfranchised of the kingdom and eventually leading them in a military coup to bring down the Wicked Queen. The oddest of changes is the elimination of the Seven Dwarves and their replacement with elves. This perhaps gives us a clear idea of the film’s influence. Like Snow White and the Huntsman, Grimm’s Snow White seeks to fall in along the lines of an epic fantasy akin to The Lord of the Rings. Thus we get the introduction of more epic fantasy elements – elves, as well as dragons and mystic flames guarded by the elves.

There is all the cheapness associated with an Asylum film – the effects of the dragon creatures in the forest and the Queen’s dog beasts is down around the usual unsteady level of most of The Asylum’s effects, although there is at least a well-staged scene where the prince Jamie Thomas King takes on a dragon in combat. On the plus side, the film manages to look a little better than most of The Asylum’s cheap productions by going on location to Austria and shooting around various historical castles and gardens (in particular the Schloss Rosenburg), which give the film a feel of a mediaeval fantasy kingdom setting on an economy budget.

The only recognisable name in the cast is Jane March. March was a name briefly in the early 1990s, a woman-child known for taking her clothes off and delivering some sizzlingly steamy performances in films like The Lover (1992) and Color of Night (1994). Her actual acting ability in any of these was a debatable prospect. Alas, by the end of the 1990s, March’s name had almost entirely disappeared off the radar. Now quite a bit more grown up (at the age of 39 and now oddly resembling Jennifer Love Hewitt), she is back as the Wicked Queen – a few years earlier and she would have been perfect casting for the role of Snow White. Here she does a reasonable job of playing a one-dimensional role with appropriate evil and calculation. By contrast, Eliza Bennett’s Snow White is pallid and instantly forgettable – as a character, she has an entirely passive role and gets to do very little throughout.

Rachel Lee Goldenberg is the only woman director working at The Asylum and has made several of their other films, including Sunday School Musical (2008), Sherlock Holmes (2009) and The Princess and the Pony (2011).