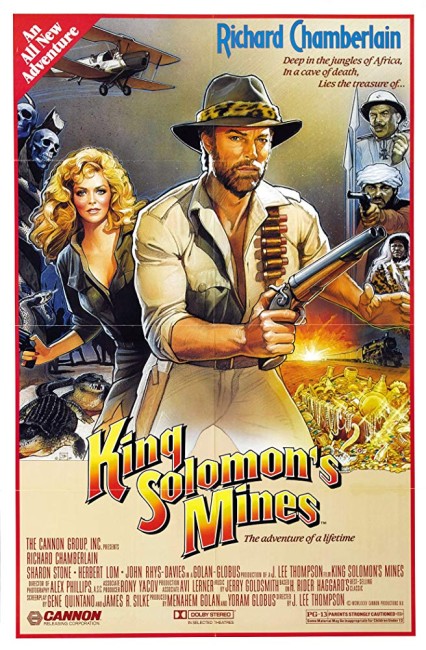 African adventurer Allan Quatermain is hired by Jessie Houston to rescue her father, an archaeologist who is being held captive by the evil Turkish Dogati and a German colonel who want his map to the legendary diamond mines of the Biblical King Solomon. Freeing the professor in a daring rescue attempt, Quatermain and Jessie then follow the map in a race to get to the mines before Dogati and the Germans.

H. Rider Haggard was one of the great adventure writers of the 19th Century. Haggard worked in various aspects of the British Foreign Service, including as secretary to the Governor of Natal, before becoming the Master and Registrar of the High Court of Transvaal. He travelled extensively throughout Africa, purportedly took a Zulu woman as mistress and wrote several non-fiction books about the continent. Back in England, Haggard embarked on a career as a writer. His first published book was King Solomon’s Mines (1885) and he then wrote She (1887), which became an important (and oft-filmed) fantasy classic with its tale of British explorers discovering a lost city lorded over by a cruel immortal queen. H. Rider Haggard later wrote 11 other Allan Quatermain adventures. Although, outside of its ability to conjure the imagination and its setting of a colonial fantasy Africa inhabited by strange tribes and lost treasures, King Solomon’s Mines is not a fantastic story per se.

There was also this horrible adaptation produced by Menahem Golan and Yoram Globus. Through their Cannon releasing chain, Menahem Golan and Yoram Globus were for a brief time during the 1980s the prolific producers of cheap films. Their output included a number of Chuck Norris and ninja/martial arts films, several Charles Bronson and Sylvester Stallone vehicles, a series of cheap fairytale adaptations, turkeys like the Italian Hercules (1983), several sword and sorcery films, several Tobe Hooper films including Lifeforce (1985) and the odd gem like Andrei Konchalovski’s Runaway Train (1985). In the fascinating Cannon Films documentary Electric Boogaloo: The Wild, Untold Story of Cannon Films (2014), several people are interviewed about King Solomon’s Mines where the anecdote is told that producer Menahem Golan ordered “get that Stone woman” for the lead, Sharon Stone was cast without anybody realising that what he was referring to was Kathleen Turner in Romancing the Stone (1984). (None of the people interviewed, including lead Richard Chamberlain, seem to have a very high opinion of what it was to work with Sharon Stone).

Of course, when Golan and Globus made King Solomon’s Mines, the overriding influence at the time was the immense success of Raiders of the Lost Ark (1981) and its return to old-fashioned adventure styled action thrills. Golan and Globus made several other Raiders copycats, including the Brooke Shields vehicle Sahara (1983), the incredibly cheap Treasure of the Four Crowns (1983) and Chuck Norris’s Firewalker (1986). In their version of King Solomon’s Mines, the story is uprooted from H. Rider Haggard’s British Empire to become a Raiders of the Lost Ark-styled adventure – the era goes from British colonial Africa of the 1880s to WWI so that the film can feature German villains a la Raiders; Richard Chamberlain is clearly intended as a copy of Harrison Ford (although, the atrocious puns make the performance comes out more resembling Roger Moore’s James Bond) and has a sparring relationship with his romantic sidekick – a then unknown Sharon Stone.

It is probably a good thing H. Rider Haggard is no longer alive to have to watch his story put through this awful camp treatment – as it is, he is probably spinning so fast in his grave that scientists could well find themselves onto a new alternate-energy source. Camp, when it fails, is grotesque and embarrassing to watch. In King Solomon’s Mines 1985, everybody overacts by degrees. Richard Chamberlain, in a badly mugging performance, seems to be looking to the screen for the laugh-track to kick in after delivering each excruciating smart-ass one-liner, each more awful than the previous. Sharon Stone does little more than scream throughout. John Rhys-Davies and Herbert Lom give embarrassing performances of eye-rolling, one-dimensional villainy.

The implicit racism of the Great White Hunter genre is something that one more or less has to take for granted but the cultural stereotypes, not to mention the helpless screeching woman performance of Sharon Stone and some horrendous gay humour, makes King Solomon’s Mines 1985 feel like it is playing “Pot the Minority Group”. None of it is funny, merely cynical in pandering to the audience’s lack of intelligence or even the notion that they might have sat down with the intention of taking the film seriously.

Director J. Lee Thompson has a worthwhile track record with films like The Guns of Navarone (1961) and Cape Fear (1962). Thompson had ventured into the adventure genre before with films such as Taras Bulbas (1962) and McKenna’s Gold (1968). By the point of King Solomon’s Mines, Thompson’s career had slid a long way down to being a hack director for hire where he was mostly churning out various Charles Bronson vehicles for Cannon. (See below for J. Lee Thompson’s other genre credits). King Solomon’s Mines was probably the biggest budget that Thompson had been granted in more than a decade. On the plus side, the African locations are impressive and the action certainly moves at a fair lick. Regrettably it is only mindless action that Thompson serves up and it does not convince in the slightest. One can never see Richard Chamberlain as being in any danger because, whether hanging over an alligator pit, dangling from a biplane wing or running from an exploding volcano, the back projection work is so shoddy one is never convinced for a single moment. Truly one of the silliest scenes one has ever seen in a film is the one where Richard Chamberlain drags along behind a train skidding along the tracks by his boots.

At the same time as King Solomon’s Mines, Golan-Globus, along with Richard Chamberlain and Sharon Stone, also shot a sequel Allan Quatermain and the Lost City of Gold (1986). This has a different director and, although mercifully removed of much of the excruciating camp, is an equally poor film.

J. Lee Thompson’s other films of genre interest are:– the classic revenge psycho-thriller Cape Fear (1962), the occult film Eye of the Devil (1967), the Communist China spy thriller The Chairman/The Most Dangerous Man in the World (1969), Conquest of the Planet of the Apes (1972), Battle for the Planet of the Apes (1973), The Reincarnation of Peter Proud (1975), the Western The White Buffalo (1977) with Charles Bronson hunting a mythic buffalo, the slasher film Happy Birthday to Me (1981) and 10 to Midnight (1983) with Charles Bronson hunting a serial killer. J. Lee Thompson also co-wrote the scripts for the very strange psycho-thriller East of Piccadilly (1940) and the bizarre time travel/adventure film Future Hunters (1986).