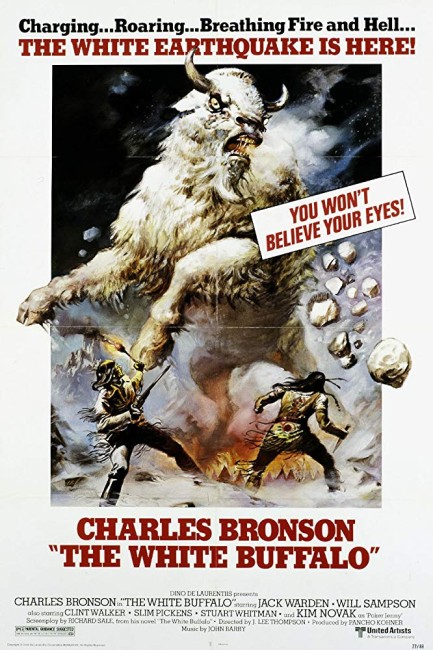 The White Buffalo is an oddity I have been trying to find for years but has been almost unavailable since it first came out. It never seemed to appear on video during the 1980s, for instance. The film sounds completely surreal in description – the idea of a reworking of Moby Dick (1851) set in the Old West with the real-life characters of Wild Bill Hickok and Crazy Horse obsessively hunting a mythical white buffalo instead of a white whale.

The White Buffalo was made by Italian movie mogul Dino de Laurentiis. Around this time during the 1970s and early 80s, de Laurentiis took a huge critical drubbing for the likes of his remake of King Kong (1976), Orca (1977), Hurricane (1979), his remake of Flash Gordon (1980), Dune (1984) and King Kong Lives (1986), which were frequently seen as vulgar and/or over-budgeted works that proved big flops. With The White Buffalo, de Laurentiis was clearly trying to make a film that capitalised on the success of Steven Spielberg’s Jaws (1975) – as he had also done with both King Kong and Orca. Charles Bronson is cast in the role of Wild Bill Hickok – de Laurentiis had largely been responsible for propelling Bronson to a major action star in the classic vigilante film Death Wish (1974).

The White Buffalo is the most eccentrically different of the various films to come out copying Jaws. It is far more Moby Dick than Jaws ever was – and seems to have been construed that way by original author Richard Sale. Certainly, J. Lee Thompson fails to fully sustain the film during the hunting scenes with any of the tension that Steven Spielberg put into the last half of Jaws and this side of the film does not work so well. The film’s credibility sinks badly from the very opening scene – which starts inside Charles Bronson’s dream of the buffalo where things collapses into risibility as soon as we see the totally unconvincing buffalo head. De Laurentiis unwisely relied upon fellow Italian Carlo Rambaldi – the man behind the infamous mechanical Kong hoax in King Kong – to provide the buffalo effects.

However, to persist with The White Buffalo is to eventually be rewarded. J. Lee Thompson chooses to root the film within the historic milieu of the Western. The White Buffalo was made at the end of the period when the Western was dying off. It took big flops like Heaven’s Gate (1980) and The Legend of the Lone Ranger (1981) a couple of years later to finally put the Western in its grave. The Western had certainly reached an interesting place by the end of the 1970s. During the 1930s through the 1950s, it had stayed as a B action/adventure genre through numerous support fillers, before gravitating to television during the 1950s and 60s. However, beginning with Sam Peckinpah’s The Wild Bunch (1969), the Western was brutally overturned – its heroism gutted and the heroes of the previous era shown to be murderers. The Western never really recovered from this. The remaining Westerns of the 1970s began to move towards historic realism. Had the Western not died away, one suspects it might have moved towards the quite interesting direction of the historical epic – which it sort of did with the modern revisionist Westerns of the 1990s and beyond such as Dances With Wolves (1990), Unforgiven (1992), Tombstone (1993), Wyatt Earp (1994), Wild Bill (1995), The Assassination of Jesse James By the Coward Robert Ford (2007) and tv’s Deadwood (2004-6).

J. Lee Thompson was a classic British director who had made films like The Guns of Navarone (1961) and Cape Fear (1962). (See below for J. Lee Thompson’s other genre films). Indeed, The White Buffalo may well be Thompson’s last good film before he became a hack making shabby action films for Cannon Films during the 1980s, usually starring Charles Bronson. There’s a fine scene where Charles Bronson and Jack Warden showdown with Whistling Jack Kileen (Clint Walker) and his men in a bar/brothel where Thompson creates fabulous tension between the two sides of tough men. The whole film has been shot with an epic feel. There are some amazing sequences during the latter half where we see fights between Charles Bronson and Indians that take up entire canyons or are spread across the whole side of a mountain.

Underlying the film is an interesting examination of the distrust and outright racism that existed between white men and Indians in the era. As much as it is a film about hunting a white buffalo, this is also a film about how two men on opposite sides of this racial distrust come to an understanding and respect of the other’s honour.

J. Lee Thompson’s other films of genre interest are:– the classic revenge psycho-thriller Cape Fear (1962), the occult film Eye of the Devil (1967), the Communist China spy thriller The Chairman/The Most Dangerous Man in the World (1969), Conquest of the Planet of the Apes (1972), Battle for the Planet of the Apes (1973), The Reincarnation of Peter Proud (1975), the slasher film Happy Birthday to Me (1981), 10 to Midnight (1983) with Charles Bronson vs a serial killer, and the dire adventure film King Solomon’s Mines (1985). J. Lee Thompson also co-wrote the scripts for the very strange psycho-thriller East of Piccadilly (1940) and the bizarre time travel/adventure film Future Hunters (1986).

The film was based on a 1975 novel by Richard Sale, a screenwriter and sometimes director of several films. Sale’s most notable work was the novel Not Too Narrow … Not Too Deep (1936), which formed the basis of Strange Cargo (1940), another fascinatingly underrated work about a group of Devil’s Island escapees who realise that one of their party might be Jesus Christ.