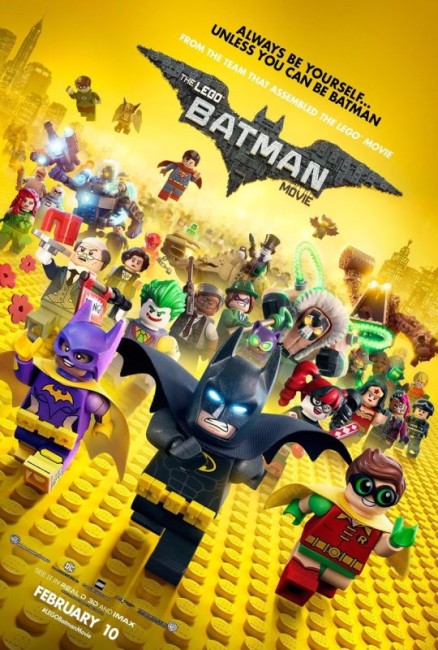 Batman goes into action to prevent The Joker, leading all the other villains of Gotham City, as he attempts to detonate a bomb. Afterwards, The Joker feels hurt when Batman refuses to acknowledge him as his principal nemesis, or even say that he hates him. As Bruce Wayne, Batman attends Commissioner Gordon’s retirement party where the role of commissioner is inherited by his daughter Barbara who gives a speech where she says she wants to create a city that doesn’t need Batman. At the ball, Bruce also encounters orphan Dick Grayson and, while distracted by other things, unwittingly agrees to adopt him. The Joker and the other villains invade the ball, only for The Joker to surrender to Batman. Suspecting that The Joker’s surrender has devious motive, Batman hatches a scheme to steal the Phantom Zone projector from Superman’s Fortress of Solitude. To this end, he recruits Dick who readily adopts a costume to go into action, calling himself Robin. Though having no time for others, Batman reluctantly warms to Dick. They break into Arkham Asylum where Batman banishes The Joker to The Phantom Zone. However, this is a ruse whereby The Joker uses the opportunity to free all the other villains imprisoned in The Phantom Zone, including Voldemort, Sauron, King Kong, The Wicked Witch of the West, the Gremlins and the Daleks, and lead them on an en masse attack against Gotham City.

The Lego Movie (2014), based on the peculiar idea of bringing Lego characters to animated life, was one of its year’s biggest successes, earning some $460 million worldwide. Part of the fun of the exercise was the crossover that went on between various Lego universes, many of which were based on pre-existing fictional worlds. Although only a supporting character there, Batman proved to be the scene-stealer of the film. Figuring on the popularity of Batman as the most recognisable comic-book character in the world, Warner Brothers have smartly given Batman a Lego movie all to himself here. That is not necessarily just a spinoff based on the character’s popularity in The Lego Movie as there has been an actual Lego Batman line since 2006, which had even resulted in a previous dvd-released animated film Lego Batman: The Movie – DC Superheroes Unite (2013). The success of these Lego movies is such that Warner Brothers has launched it as a franchise with The Lego Batman Movie being followed seven months later by The Lego Ninjago Movie (2017), while the first film was sequelised with The Lego Movie 2 (2019).

Phil Lord and Chris Miller, the directors of The Lego Movie, have departed (although are also present as producers) and have handed over direction to Chris McKay who was an animation supervisor on the first film. McKay was a director on tv’s Robot Chicken (2005– ) and subsequently went on to the live-action The Tomorrow War (2021). The script comes from a number of writers.

The name that caught my attention was Seth Grahame-Smith, the novelist who wrote Pride and Prejudice and Zombies (2009) and Abraham Lincoln, Vampire Hunter (2010), which were filmed as Abraham Lincoln, Vampire Hunter (2012) and Pride and Prejudice and Zombies (2016), as well as the original screenplay for Tim Burton’s Dark Shadows (2012) and produced the remakes of It (2017) and Child’s Play (2019).

The Lego Batman Movie takes everything that The Lego Movie was and makes it bigger and more colourful. There are times the camera pulls back to show the numbers of characters and elements interacting on screen at the same time and the results are quite mind-boggling. The action moves at a whiplash pace. The film has a palette that seems to uses every colour of the spectrum at once.

The opening sequence has a blur of colour, action and lightning paced humour that quite blows you away, not the least of which involves Batman having his own song (part of which includes the weaving in of the nana-nana theme from the Batman (1966-8) tv series), throwaway gags with pilots doing rock-paper-scissors with actual paper and scissors, and Batman lecturing The Joker that he doesn’t do ‘ships. Oh and not to mention that the first five minutes of the film manages to get in cameos from every Batman villain ever created, including from the 1960s tv series. And that doesn’t count the opening credits, which feature Will Arnett’s gravelly Batman voice breaking the fourth wall and rather hilariously commenting on the studio logos as they appear. It is the most energy and humour-packed opening sequence I have seen in any film in recent memory.

The screenwriters seem to have set out to have as much fun with the Batman franchise as possible – if anything, The Lego Batman Movie should be considered less a Batman film than a parody of Batman. It feels like a bunch of Batman fans that have sat around and determined to have as much fun as possible, throwing in every gag they can possibly think of. Batman ridicules the flaws in The Joker’s previous schemes, which happen to be the ones that took place in The Joker’s big-screen appearances in Batman (1989) and The Dark Knight (2008). There are even jokes about the Bat Shark Repellent from the Batman (1966) film – which comes in a throwaway gag that has a witty playoff later in the show. There is a montage where we get to see Lego versions of every single incarnation of Batman on screen, while Alfred adopts the guise of the tv Batman as he joins the party to go into action. There are cameos from a host of other Justice League characters during the visit to the Fortress of Solitude. The most fun comes during the scenes where The Joker releases the villains from The Phantom Zone, which include everything from King Kong, Bruce the Shark from Jaws (1975), The Eye of Sauron from The Lord of the Rings, The Wicked Witch of the West and her Flying Monkeys, the Gremlins, the Daleks from Doctor Who (1963-89, 2005– ), the Agent Smiths from The Matrix films, and Voldemort from the Harry Potter series.

If you could take the film seriously (which absolutely positively you cannot), the quibble might be that it plays free and easy with the Batman mythos. Dick Grayson gets a different origin – not to mention that his background as the child of trapeze artists whom Batman decides to adopt has been excised – and Barbara Gordon, while she is Commissioner Gordon’s daughter, actually becomes his replacement (which she never has been in any comic-book incarnation) and only adopts the Batgirl costume towards the end of the show. Wayne Manor is now located on an island in Gotham Harbour, while Batman demonstrates a passion for heavy metal music and playing guitar in his free time, which are both new aspects of the Batman mythos we have never seen before.

A sequel was apparently planned but ended up being cancelled when Universal acquired the rights to the Lego franchise in 2020, meaning that they no longer had use of characters owned by Warner Brothers.