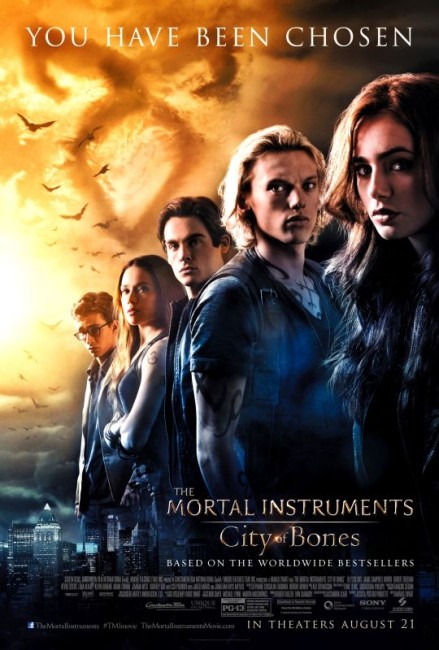 Clary Fray, a teenager living in New York City with her mother, becomes obsessed with a strange symbol and finds she is drawing it everywhere. She begins to see things that nobody else can and thinks she witnesses a murder at a nightclub. Her mother tells her to flee. Instead, Clary returns home to find her mother has been abducted whereupon she is attacked by shapechanging creatures. She is saved by the hooded figure who has been following her. He introduces himself as Jace Wayl and says he is a Shadow Hunter who kills demons. Jace takes her, along with her best friend Simon Lewis, to safety and introduces her into a bewildering world of magicians, demons, vampires and werewolves. She and Jace are attracted, much to the upset of Simon who has had a long unfulfilled crush on her. It is discovered that a block has been placed on Clary’s memory. In undoing the block, they discover how her mother fled the Shadow Hunter world when Clary was child, taking with her the Mortal Cup, a powerful instrument sought by the warlock Valentine Morgenstern in order to gain demonic powers. Clary’s memories were magically altered to blank its hiding place. She now realises the whereabouts of the Cup. At the same time, Valentine emerges through the portal between worlds. He also comes with shocking revelations about the nature of Clary and Jace’s true parentage.

Ever since the massive success of the Harry Potter and Twilight films and The Hunger Games (2012), the Young Adult novel has exploded across bookstores. More importantly, it has become a rich vein of material mined by film studios looking for the next big hit, seen as something with an extended story arc that can be drawn out over multiple films to create a franchise.

The downside of this is that the genre has been littered by far more wannabes that have started out adapting Young Adult series but have never made it beyond a single film due to low box-office returns – see the likes of The Golden Compass (2007), The Seeker: The Dark is Rising (2007), Cirque du Freak: The Vampire’s Assistant (2009), I Am Number Four (2011), Beautiful Creatures (2013), The Adventurer: The Curse of the Midas Box (2014), The Giver (2014), Vampire Academy (2014), Fallen (2016), The 5th Wave (2016), Maximum Ride (2016), The Darkest Minds (2018), Mortal Engines (2018) and Artemis Fowl (2020). The producers of The Mortal Instruments set out to proof themselves against such a fate by giving the go-ahead to a sequel before City of Bones was even released, although this was quickly rescinded when the film proved a box-office flop and was widely trashed by critics and audiences alike.

As the film of The Mortal Instruments: City of Bones arrives, it immediately has the tired feeling of a wannabe about it – of not being something that was defining the game in the same way that the Harry Potter and Twilight films were but of merely shuffling the elements around in the hope that it will get fans of these others enthused for more of the same. Coming out of the preview, a theatre staff member asked me what the intended age group for the film was and after thinking about it, I realised that it seemed to be repackaging the essence of Harry Potter for Twilight mid-teen sensibilities. Or perhaps even more so, you could look upon it as a reworking of the Disney flop The Sorcerer’s Apprentice (2010) recast for the darkly magnetic teen sex appeal of the Twilight films. And maybe with a few dashes of The Empire Strikes Back (1980) “I am your father, Luke” plot twists, playing upon the uncomfortable realisation of potential incest, thrown into the mix.

Nothing about City of Bones enthused me before going in. The trailer felt boring. Dutch born director Harald Zwart, who had previously made the utterly bland and formulaic likes of Agent Cody Banks (2003), The Pink Panther 2 (2009) and The Karate Kid (2010), did nothing to inspire one’s confidence that City of Bones would be a masterpiece of the genre. This did not dissipate any as the film started. I was mildly diverted by some cool effects with shapechanging dogs in the first few scenes. However, everything quickly disappears into a blandness. It all plays out with the sense that what we have is a commercial product being handled by a director who regards it as an assignment and without any essential passion for the material.

Case in point being the various battles with the vampires and the displays of magic that occur during the climactic scenes. The Harry Potter and Lord of the Rings series did similar things with an amazement; here they feel like some pretty flashy light shows and vigorous fight scenes that are so superficial and processed that you immediately forget what happened the moment they are over. The costume designer readily delves into Goth fashions and most of the cast spend the film outfitted in a good deal of black, leather and dark makeup. However, it only feels like adolescent make-believe Goth – the sort where tattoos are cool and really house magic sigils – that serves as a surface-deep patina on a fairly ordinary adolescent romantic drama.

The film has done a close and faithful job of translating Cassandra Clare’s book to the screen. This does end up with a story that in its latter half feels excessively complicated in the number of characters and allegiances it introduces clearly for plot aspects that will play out in the subsequent films – the same problem shared by the later Harry Potter films. There is the sense you get throughout that the film has created a complex back mythology and one that winds in familiar figures like vampires, werewolves, witches and demons into its story – alas, for all the effort, the film fails to make it seem a terribly interesting mythos. The scene where we learned that Johann Sebastian Bach was really a Shadow Hunter and we even see his portrait hiding tattoos – a point you feel like the film is channelling The Da Vinci Code (2006) and its secret historical conspiracy of geniuses – causes the audience to start laughing.

Lily Collins, daughter of Phil Collins, who previously made a vivacious breakout as Snow White in Mirror, Mirror (2012), is okay. Jamie Campbell Bower, who it should be noted has appeared in both the Harry Potter and Twilight series and has no doubt has been recruited for such association, seems to be cast with the intention of being another Robert Pattinson. Bower seems more brooding and pouty than he ever dazzles with the sexuality that Pattinson seemed to ooze. Moreover, the film seems too self-conscious about its attempts to cast him as such, outfitting him with mocking lines like “If you wanted me to take my clothes off, you should have asked,” in response to Lily Collins making a comment about him tearing his shirt to make her a bandage. However, little of this seems to ever emerge with the perpetually unfulfilled romantic longing that the Twilight series did. There is the occasionally amusing line – “Go ahead, you can hang your head out the window if you want,” Lily Collins tells her mother’s werewolf boyfriend Aidan Turner, which gets the peppery reply “I’m a werewolf, not a Golden Retriever.”

Despite the failure of the film, the books were next adapted into a tv series with Shadowhunters: The Mortal Instruments (2016– ) featuring Katharine McNamara as Clary Fray.