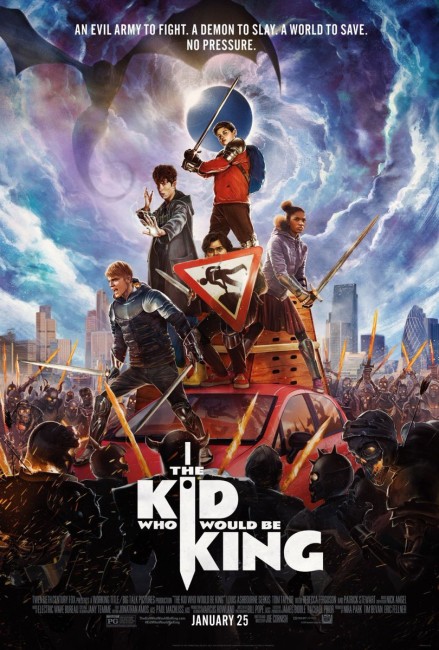 Twelve year-old Alex is an average school kid in London. While pursued by the school bullies Lance and Kaye one evening, he falls down into a building site. There he discovers a sword embedded in a block of stone and is able to pull it out. The next day a strange kid calling himself Mertin turns up at school and proclaims in front of everybody that Alex is the new king to the ridicule of the whole school. Mertin, who claims to be the magician Merlin returned to life, turns up in Alex’s room and uses magic to defeat an attack by flaming horsemen figures risen from the ground outside. Merlin is insistent that Alex is the new King Arthur. They have four days before the eclipse to find the portal to the underworld and defeat the sorceress Morgana before she rises again. Joined by his friends Bedders and the bullies Lance and Kaye, who he makes into his knights, Alex sets out on a quest to Tintagel. All the while, Merlin struggles to train them as a fighting force as they are pursued by Morgana’s army of flaming warriors.

British director Joe Cornish attained quite a buzz a few years ago with the alien invasion film Attack the Block (2011). The Kid Who Would Be King was his second film as director. Elsewhere Cornish has written the scripts for The Adventures of Tintin (2011) and Ant-Man (2015). In the exciting news department, he is next announced to direct an adaptation of Neil Stephenson’s seminal Cyberpunk novel Snow Crash (1992).

The legends of King Arthur have a long history on film going back to the 1920s and covering some 40+ films, tv series, deconstructions and spoofs. (For a detailed overview see Films About the Arthurian Legends). The Kid Who Would Be King has a surprising number of resemblances to the low-budget Canadian-made Kids of the Round Table (1995), which had a very similar plot where a modern schoolkid inherits Excalibur and the role of king.

The concept of The Kid Who Would Be King is somewhat ungainly but Joe Cornish has a great deal of fun transliterating the familiar elements of the Arthurian cycle to the present day. The sword in the stone is found embedded in a block of cement on a building site and the young would-be king’s mother’s immediate concern is about her son running around with a dangerous weapon; Arthur recruits his school friends and bullies as his knights where the lead bully’s response is to snatch the sword and proclaim himself the king; the kids meet around a regular dining room table where it is found that the leaves can be unfolded to make it a Round Table; while the Lady in the Lake makes her appearance in a bathtub at one point.

After finding so many ways to wittily reimagine and deflate the elements of the Arthurian legends, the surprise is that Joe Cornish doesn’t play The Kid Who Would Be King as a comedy – you often suspect that some of the material should have been or was intended that way. Cornish does a fairly solid job of making the film work. The story comes with well written character arcs, especially the scenes passing through the lake and the fight over the sword as we see the bullies come to accept the code of chivalry.

Cornish has fed the Arthurian Legends through the modern adventure spectacle. There is, for example, nothing to do with flaming horsemen in the original legends but he creates a series of CGI action sequences around the appearances of the horsemen, while Morgana is now transformed into a winged demon figure. Cornish certainly displays an assurance with the effects scenes – of sequences with the kids being pursued through the streets in a car by the flaming horsemen and through the woods and a cliffside on ponyback; or where Merlin animates a ring of tree trunks to teach them combat manoeuvres. Everything arrives at an appealing big scale climax where the whole school is trained to fight back against Morgana’s army.

Lead actor Louis Ashbourne Serkis is the son of actor Andy Serkis and has racked up a number of high-profile credits – in everything from The Hobbit: An Unexpected Journey (2002), Alice Through the Looking (2016), The Current War (2017) and Mowgli (2018) to tv series like SS-GB (2017) and Taboo (2017- ) – despite being only fourteen at the time the film was released. He makes for a decent average kid.

The other actor who comes to the fore is Angus Imrie as the young Merlin who enters the film with a real live wire energy and captures the show whenever he is around (even if he and Patrick Stewart as the elder Merlin seem to be completely different characters in their mannerisms and performances). Imrie has an appealing novelty method of conducting magic with a combination of rapid fire clapping, clicking and popping arm gestures.