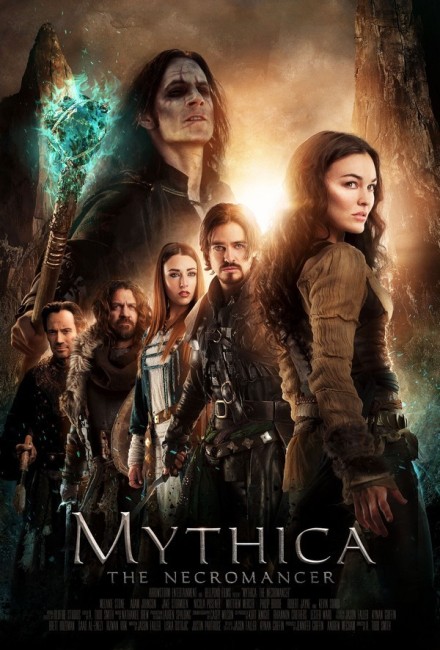 Marek is learning more about her powers as a necromancer from Gojun Pye when they are attacked by Szorlok’s minions. Gojun warns Marek that Szorlok is coming for her and tells her to remain in safety by their campfire. However, Thane is taken prisoner by Peregus Malister and Marek decides she cannot stay behind and do nothing. She, Dagen and Teela go to Malister and offer to buy Thane back. They are instead told that they only way to free him is to go on a quest to steal a shipment of illustrium. As they set out, Szorlok comes seeking another of the fragments of the Darkspore.

The Mythica series was an attempt by Utah-based Arrowstorm Entertainment to create an original epic fantasy film series. The series began with Mythica: A Quest for Heroes (2014) and continued with Mythica: The Darkspore (2015). This was the third film and was followed by Mythica: The Iron Crown (2016) and Mythica: The God Slayer (2016). The results proved surprisingly good.

The Necromancer marks the changeover of directorial hands from Anne Black, who had handled the first two Mythica films, to A. Todd Smith who had acted as cinematographer on the first two films and was replaced by John Lyle for the subsequent entries. The first film operated most engagingly. Surprisingly for a low-budget film, its strengths were all in the characterisation of the quartet and in the ways that we saw the characters find their arcs and play off each other. When the series started to expand beyond that in The Darkspore, it tended to fall back on being just a regular low-budget fantasy film.

Mythica: The Necromancer is the slightest of the Mythica films so far, even though it is not unwatchable by any means. A. Todd Smith is not quite Anne Black and delivers the material in more regular ways and without quite the same affinity for the characters. On the other hand, the same mix of elements certainly works well above average in comparison to all the other low-budget fantasy films out there. Smith does a good job creating some solid and effective battle scenes, despite lacking a budget that can marshal hundreds of extras. There is a particularly good scene where Melanie Stone comes into her powers and blasts away an entire attacking force.

The characters again interact well. This time Adam Johnson is sidelined (or locked up in chains for much of the show), while the film does arrive at a tragic sacrificial ending. This time we have the addition to the mix of Philip Brodie who does the lawful evil villain while seeming to be channelling actor Bruce Payne. Kevin Sorbo, who became an executive producer on the series here, has the largest role he has in any of the films so far.