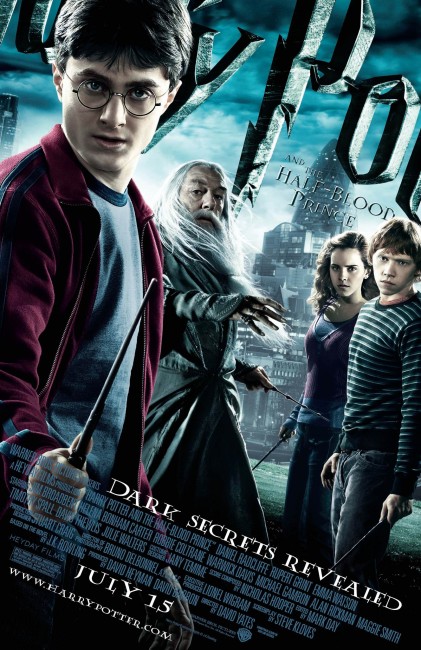 Dumbledore takes Harry Potter with him to help persuade Professor Horace Slughorn to return to teach at Hogwart’s. Slughorn is tempted by the thought of teaching Harry and accepts the position of Potions Master. However, Dumbledore has a deeper motive in wanting to find the secret that Slughorn holds, which relates back to when Slughorn taught the young Lord Voldemort. At the same time, Harry, Ron and Hermione witness a covert rendezvous and realise that Draco Malfoy is up to something sinister. In Slughorn’s class, Harry finds a copy of the potions textbook that once belonged to someone who signs himself ‘The Half-Blood Prince’ and contains notations that offer considerable help. Meanwhile, Ron has problems as Lavender Brown becomes infatuated with him, causing upset to Hermione. As Slughorn reluctantly reveals his memories to him, Harry realises that Lord Voldemort has been able to survive death because he has split his soul into six parts that have been hidden in random objects known as Horcruxes. Dumbledore takes Harry on a dangerous mission to find and destroy one of the Horcruxes.

Half-Blood Prince received some of the best notices of any of the Harry Potter films to date. My own views are somewhat more mixed. Maybe it was just that the buzz about the film elsewhere raised expectations too highly, or maybe I went in expecting more than the other films, of which I do not count myself as a huge fan. The one Harry Potter film that did stand out for me was The Order of the Phoenix where the entry of director David Yates into the series brought a fresh and exciting new hand that considerably elevated the elements.

David Yates and Chris Columbus are the only directors to handle more than one entry in the Harry Potter series. Chris Columbus seemed constantly distracted by trying to impress an audience but only ever threw up banal displays of special effects. On the other hand, David Yates emphasises story and characters, while his interest in special effects seems unobtrusive or at least at seamless service of the story. This is surely best demonstrated in comparing the way two similar scenes emerge in either director’s hands – the game of Quidditch and the venture down Diagon Alley. Where Columbus overburdened both scenes with special effects to a point of emphatic overkill, Yates goes the other way. His view down Diagon Alley is pretty but bare; not overflowing with magic everywhere the eye looks. The Quidditch game is never dwelt upon more than a couple of brief passing scenes rather than becoming a dizzying copy of the speeder bike sequence in Return of the Jedi (1983).

Similarly there is a venture into the bathrooms once again, but here they seem like ordinary lavatories that could inhabit any old school building rather than the over-dressed edifices that Columbus turned them into (not to mention come with an absence of any ghosts inhabiting them). David Yates also has stripped out the background scenes wandering through the hallways filled with paintings and portraits come to life. Half-Blood Prince is a surprisingly subdued film for the better part. Up until about the last twenty minutes, there is little in the way of wow factor – none of the special effects or creature sequences that were a big part of the other films. Cinematographer Bruno Delbonnel even seems to have muted the colour schemes of the earlier films to almost a uniform grey.

Half-Blood Prince is also disappointing because it comes after The Order of the Phoenix. With The Order of the Phoenix, the film conducted an adept juggle between the personal lives of the characters and the wider battle. By contrast here, the big story seems distant and an afterthought that the film only occasionally remembers to get back to. What Order of the Phoenix did well was create the sense of storm clouds gathering on the horizon, of the characters on the cusp of an epic battle between good and evil. With Half-Blood Prince, it is almost as though the saga has gone back a couple of steps to where everything is normal again, class is going on as always and where Lord Voldemort is a distant dark force again.

Crucially, we have gone from a film with children preparing to battle against ultimate evil to a series of comic complications regarding Ron Weasley’s love life and misapplied love potions. Nor is a plot that involves spending three-quarters of the film trying to get an aging academic to cough up a memory as exciting as a group of kids preparing themselves for a magic war.

The problem with a film like Harry Potter and the Half-Blood Prince, which is adapted from a novel that runs to 650 pages, is that what we end up on screen is straining at the seams trying to cram everything into a two-and-a-half hour film. Even then, the filmmakers have had to curtail a number of elements from the books and there are aspects of the plot that refer to other scenes that give the impression they have been cut.

For instance, though the film is named Harry Potter and the Half-Blood Prince, we only find out who the half-blood prince is in a one-sentence explanation at the end – and the result leaves us puzzled as the revelation has no relevance to the story that has transpired. The Death Eaters are seen attacking London in the opening moments but this does not to relate to anything that subsequently follows. There is some mention of people disappearing but this is of no importance elsewhere in the film. Draco Malfoy is shown to have smuggled various evildoers into the school via the vanishing cabinet and there is a brief scene of them causing havoc and smashing up the Great Hall but in the next scene they have vanished and the whole school is united in sadness at Dumbledore’s passing.

There is also the problem of J.K. Rowling’s constant deus ex machina plotting where Harry, despite being the Chosen One, never actually does anything worthy of it. Everything that happens in the film is simply handed to him – he wins the vial of liquid luck after using a potion in the Half-Blood Prince’s textbook, which he just happens to find in a cupboard; the whereabouts of the Horcrux is uncovered by Dumbledore; Harry never has to do anything to deduce Voldemort’s secret, the memory is simply handed him by Slughorn. Even at the climax, he stands nearby and does nothing while Dumbledore is killed.

None of this makes for a bad film by any means. I enjoyed Harry Potter and the Half-Blood Price despite its frustratingly mannered quietness at times. The dramas and the film’s depiction of the awkwardness of teenage romance come with a likeable amusement. Both Rupert Grint and Emma Watson get more screen time than before and play well, while Michael Gambon shines with great dignity in his swansong for the series. There is a fine new performance from Jim Broadbent who wrings a good deal of sympathy out of the role, while Helena Bonham Carter (who is on screen far too little) seems to be having a field day being bad. Bonnie Wright is a sweetly appealing Ginny while the film welcomely gives more time over to Evanna Lynch’s charmingly eccentric Luna.

Where David Yates and Harry Potter and the Half-Blood Prince come into their own is in the last twenty minutes during Harry and Dumbledore’s venture into the cave to obtain the Horcrux locket. The entry into the cave holds a beautifully dark and haunted mood and the scene where the Inferi reach up grab Harry from the waters of the lake jolts the entire audience in their seats. The subsequent murder of Dumbledore is of course the scene that gives emotional resonance to the film.