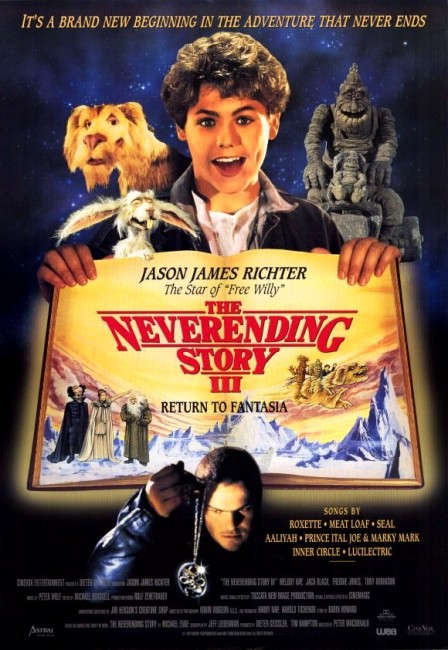 On the run from bullies, Bastian hides in the school library where he is surprised to find that Mr Koreandor is now working as the librarian. When the bullies find him, Bastian escapes by picking up ‘The Neverending Story’ and wishing himself into the land of Fantasia. The bullies discover the book and its secrets and start rewriting it, causing upheaval inside Fantasia. The Childlike Empress gives Bastian her amulet so that he can return to this world and stop the bullies. However, this also causes Falkor the luckdragon, a living tree and a baby Rock Biter to be transported into the real world too.

This was the second of two unnecessary sequels to Wolfgang Petersen’s The Neverending Story (1984). As even the credits are forced to admit, the film is now only slimly connected to Michael Ende’s original book, while the central idea of an interactive book has been abandoned altogether.

This film is directed by Peter MacDonald, a former second-unit director on the likes of The Empire Strikes Back (1980), Excalibur (1981) and Batman (1989), who made his less than stellar directorial debut with Rambo III (1988) and would later return to the fantasy genre to direct the tatty Hallmark Entertainment tv mini-series The Monkey King/The Lost Empire (2001). The most interesting name on the credits is a script from no less than horror director Jeff Lieberman, who made cult B-budget films such as Squirm (1976), Blue Sunshine (1977) and Just Before Dawn (1981). The film’s other novelty in retrospect is in starring a young unknown Jack Black as the lead bully.

Unfortunately, The Neverending Story III is abysmal. Certainly, whenever it is in Fantasia the imagination soars – there are some superb mattes looking out across the world in beautifully rich Day-Glo colours. The opening, against which the credits play, is a stunning computer animation sequence, which moves across the landscape as the seasons change. There are some imaginative sets, the best being the interior of the crystal city. However, it is here that one starts to grasp the film’s failure of imagination – while the sets are good, one realises by the end of the film that the only sets we have visited in Fantasia have been the single interior of the ice city, Engywook’s lab and the Rock Biter’s home. Imagination clearly presented on a limited budget.

Unfortunately, the film is waylaid by a mindless juvenility. It was a major mistake to take the story out of Fantasia and back to Earth where the focus now becomes the comic mishaps of the various creatures in the contemporary world rather than adventure in a land of fantasy. The Henson Workshop’s creature effects lack any conviction. Junior, the baby rock biter, seems a direct copy of Baby Dinosaur in tv’s Dinosaurs (1991-3), which was also created by The Henson Workshop. Even sillier is the tree-creature Barky, which clumps about trailing ridiculous twigs from its feet and hands.

Even worse than that is the film’s annoyingly hip attitude to the creatures. As is the problem with much contemporary Disney, fantasy these days is getting made without any suspension of disbelief but rather is pitched at kids in terms of getting easy laughs derived from pop culture references. The creatures here crack asinine contemporary culture jokes – about preferring to be in Las Vegas, about missing their flight, comparing Bastian to Arnold Schwarzenegger – which patently destroys the illusion of Fantasia as a fantastic realm. Even the Childlike Empress manages to discover the concept of ‘shopping’.

The absolute pits are reached in the interludes in the Rock Biter home where we meet Mrs Rock Biter who wears stone curlers and where the Rock Biter sits watching Rock Biter-styled MTV. In the film’s most cringe-worthy moment, Rock Biter and son pedal across the landscape on their stone tricycles to the pounding accompaniment of Steppenwolf’s Born to Be Wild (1968).