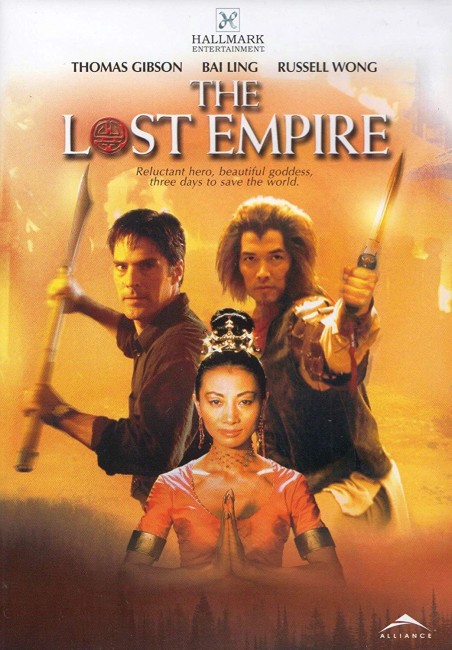 aka The Lost Empire

Nicholas Orton, a scholar of classic Chinese literature, is working for a museum in China but hates his job. As a series of baffling disasters strike the city, Nicholas is approached by a mysterious woman. She tells him that time is being wound back and begs his help in saving the world. She takes him into the world of the classic tale of Chinese literature ‘Journey to the West’. She explains that she is Kwan Ying, the Chinese goddess of luck, and that five demons are attempting to have all copies of ‘Journey to the West’ erased from the world. They rescue the Monkey King, the hero of ‘Journey to the West’, from where he has been imprisoned in a mountain. Joined by Monkey King’s two companions, the always hungry half-pig, half-human Pigsy and the perpetually humourless Friar Sand, they set forth to confront the demons and stop the tyranny they have brought to the heavens via the corrupt Prime Minister Confucius. In the process, Nicholas finds that he is falling for Kwan Ying. However, as she responds to him, this starts causing her to lose her godlike powers and become mortal. They rescue Wu Chung En, the author of ‘Journey to the West’, from imprisonment. However, the demons have corrupted Author Wu and, after being released, he instead pleads with the heavenly court for all copies of ‘Journey to the West’ to be destroyed. It is up to Nicholas to fight for the worth of the story and save the world from being wound back in time.

The Monkey King, known as the blandly anonymous The Lost Empire on American shores, is a tv mini-series from Hallmark Entertainment. Hallmark have been responsible for a great many movies and mini-series for tv, almost all for a family audience, and have made a number of adaptations of classics, as well as traditional and Christmas-themed works. (Hallmark’s other genre productions are listed at the bottom of the page).

The literary classic that Hallmark have turned to in the case of The Monkey King is Journey to the West, a classic tale that was written in China sometime in the 16th Century. The author is generally attributed to being Wu Cheng En. Journey to the West concerns a pilgrimage to India undertaken by the scholar Xuanzang to obtain some holy texts. (Interestingly, Xuanzang, whose name is often rendered into English as Tripitaka, was an actual historical scholar). Xuanzang is accompanied by several companions – the mischievous trickster Monkey King, the half-human, half-porcine Pigsy and the loyal monk Friar Sand. Along the journey, they undergo various adventures and encounter fantastical creatures, before the companions ascend to Buddhahood at the end of the tale.

The Monkey King promisingly comes written by David Henry Hwang, the playwright who wrote the original play and movie version of David Cronenberg’s gender deception film M. Butterfly (1993). Hallmark have handed direction over to Peter MacDonald, a former cinematographer and camera operator on various high-profile films. MacDonald made his directorial debut with Rambo III (1988) and has made various other films including Mo’ Money (1992), the Jean-Claude Van Damme film Legionnaire (1998) and The Extreme Adventures of Super Dave (2000). Not promisingly for The Monkey King, Peter MacDonald’s only previous venture into fantasy was the embarrassingly bad The Neverending Story III (1994).

It is probably inevitable that any Western-made venture into a classic tale that is so popular and well loved in another culture is going to emerge as a disappointment that either crudely misunderstands or waters down the original for Western audiences. Indeed, to this extent, almost all of the Buddhist elements of the original tale have been excised from the mini-series. One of the most disappointing aspects is that The Monkey King is not an authentically Chinese production – although it casts a number of Chinese American faces in the supporting cast, all the names on the other side of the camera are Caucasian while the role that is the equivalent of the scholar Xuanzang/Tripitaka is inhabited by the Western face of Thomas Gibson.

The most peculiar thing about The Monkey King is the way that the mini-series wraps Journey to the West into a bizarre meta-fictional framework in order to give it a contemporary relevance. (The same happened with The Forbidden Kingdom). In place of the scholar Xuanzang is Thomas Gibson as a modern-day academic specialising in Chinese literature who must venture into the world of the story in order to go on a quest that saves the story (and the world) from being destroyed. This requires the narrative to engage in all manner of peculiar meta-fictional contortions. To give a Western equivalent of this, imagine something as central to Western literature as the works of William Shakespeare substituted for Journey to the West. Were that the case we would have a story in which to wit:– a contemporary scholar of Shakespearean literature is approached and told that the modern world is about to collapse because villains are attempting to erase all copies of Shakespeare’s works, necessitating that the scholar venture into a world where all of Shakespeare’s fiction is real where he is then joined by Hamlet, King Lear, Romeo, Prospero, Richard III et al on a journey to persuade Shakespeare himself not to abandon his works as worthless, lest this somehow (for reasons unclear) cause the modern world to be wound back in time to Elizabethan England. Such a description sounds completely bizarre and it should be regarded as no different when applied to a less familiar work of literature like Journey to the West.

Peter MacDonald’s evocation of fantasy remains stolidly earthbound throughout. There is never any point that The Monkey King soars with imagination. Indeed, the mini-series sinks from the moment of Thomas Gibson’s entry into the land where he must face a CGI tiger and dance across a series of pillars as fireballs rain down – a sequence that fails to conjure anything approaching suspense or excitement, anything other than feeling that Gibson is reacting to a cheaply rendered CGI environment. There are some very poor CGI effects, including the sequence with the black dragons and especially when it comes to the three-headed snake that threatens Bai Ling after she is shrunken and placed in a jar. The only point that the sets attain any imagination is when we arrive at the Jade Emperor’s impressively scaled courtroom.

You can only think how much more fantastical a work The Monkey King might have been had it employed a Hong Kong director – someone like Tsui Hark, Ching Siu-Tung, Andrew Lau or Cory Yuen. Hong Kong fantasy cinema is fired up with such fantastical visions that had even some of this been imported on The Monkey King, we might have had a mini-series that flew with genuine imagination. Even considered though, other Hallmark mini-series – most notably the excellent Arabian Nights (2000) made the year before, which one senses that Hallmark are trying to replicate with The Monkey King – have flown with a magic and there is no reason why this should not have either. However, The Monkey King never seems to be anything more than an adventure that takes place on a series of obvious sets and with cheap effects.

Furthermore, Peter MacDonald keeps putting colloquialisms into the mouths of the characters that frequently punctures the suspension of disbelief – “Let the human put it on the tab,” “Master Se Fung says “Just kidding””. The party arrive at a castle – “It’s a resort for the rich and famous” – or cry out “For Buddha and country” as they head into battle. In one scene, Thomas Gibson is transformed into a fly and given the advice “And whatever you do stay off the dog dooey.” It is the same inane insertion of quick contemporary culture or colloquial jokes and references that totally wrecked MacDonald’s The NeverEnding Story III.

Thomas Gibson of Chicago Hope (1994-2000), Dharma and Greg (1997-2004) and Criminal Minds (2005– ) fame is cast in the role of the scholar. Gibson is a handsome and likeable actor but The Monkey King‘s failing is that Gibson is not a natural when it comes to these types of heroic roles. He is a more intellectual actor, rather than a physical heroic type and clearly seems uncomfortable in the setting as though aching to get back to contemporary or realistic surroundings.

Cast in the role of the Kwan Ying (or the bodhisattva Guan Yin in traditional Chinese legend, who becomes the goddess of luck here), is Bai Ling, a Chinese actress who has made an impressively ethereal presence on Western shores in roles in films like The Crow (1994), Dumplings (2004) and Sky Captain and the World of Tomorrow (2004). Bai Ling is an actress who does well when she gets to play mysterious and enigmatic but here is placed in a generic role that requires her to be no more than a standard love interest. On the other hand, American-born Chinese actor Russell Wong comes across with just the right natural charisma and irrepressible energy that you would expect of Monkey. It is a shame that he did not get to be the lead character rather than Thomas Gibson, where you could have been guaranteed he would have given the series a good deal more life.