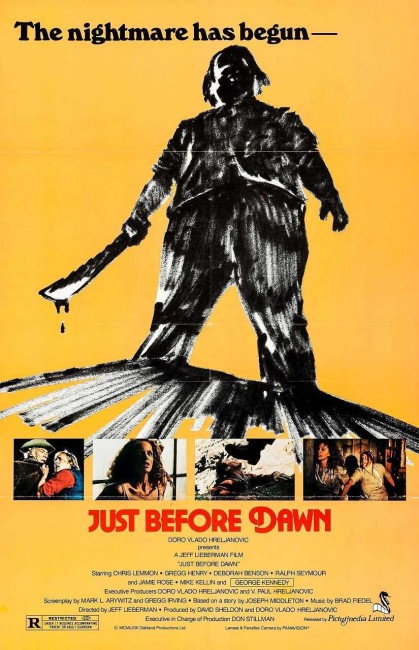 Five friends head up into the remote mountains in an RV to view the property that Warren has inherited. Despite being warned away by the ranger, a crazed preacher ranting about demons and a backwoods family, they set up camp. Soon however, members of the group are attacked and killed by two hulking, mindless twins.

Jeff Lieberman was one of the also-ran names from genre cinema during the 1970s, although never attained the status of other cult directors from the era such as George Romero, John Carpenter, Wes Craven, Brian De Palma, Larry Cohen or Tobe Hooper. Lieberman appeared with two films that have gained a small cult audience – the killer worm saga Squirm (1976) and Blue Sunshine (1977) about people being turned into crazed zombies as a result of LSD flashbacks. There was also ‘Just Before Dawn, which I would argue is his best film. Also of note during this period is Lieberman’s tv movie Dr Franken (1980), which cleverly updates the Frankenstein story to a modern hospital.

Subsequent to Just Before Dawn, Lieberman’s output began to flag with he only making the silly Remote Control (1988) about an alien mind control videotape and then a long period of silence before making a belated return to the director’s chair two decades later with Satan’s Little Helper (2004). Outside of that Lieberman has done little – the story for the children’s film The Neverending Story III (1994) and as creator/producer of the tv series Til Death Do Us Part (2006-7), an anthology series about marriages that end in murder.

Just Before Dawn is one of the most obscure films in Jeff Lieberman’s canon – it was not widely seen during the time it originally came out and never appeared to receive any video release. It surprisingly also turns out to be the best of his films. Clearly, the funding that Lieberman received required him to make an entry that jumped aboard the 1970s Backwoods Brutality cycle a la films such as Deliverance (1972), The Last House on the Left (1972), The Texas Chain Saw Massacre (1974) and The Hills Have Eyes (1977), which all feature city folk being brutalised, killed and tortured by backwoods hicks and in-breds. (See Backwoods Brutality Films for a list of other films in the cycle).

The plot here holds more than a few resemblances to The Texas Chain Saw Massacre – a group of five friends on their way to visit a family property in the backwoods who unwittingly run astray of hulking psychopathic backwoods in-bred hicks. The two twin brothers also make the film resemble something of the satiric Mother’s Day (1980), which had just come out the previous year.

Jeff Lieberman does nothing particularly different or original with the basics of the genre. What he does do is generate some excellent suspense set-pieces. The journey up the mountainside is filled with some effective jolts – a deer thrown out across the road in their path; a body jumping on the back of the RV and then seen sliding down the windows.

There is a particularly eerie scene where Jamie Rose and Chris Lemmon are fooling around in the water and we see one of the brothers entering the water in the background, only for her to be touched from under the water and assume it is Lemmon before turning around to see Lemmon getting out on the bank. There is an excellent scene where Chris Lemmon crosses the rope bridge and one of the brothers hacks through the rope, and he ends up falling into the water, manages to climb back up the cliffside, only to find the brother waiting for him at the top.

There are some very well staged sequences – like where Ralph Seymour thinks he sees Chris Lemmon coming towards them but doesn’t have his glasses on and it to turn out to be one of the brothers who delivers a machete in the chest, while Jamie Rose flees to hide inside the church but does not see the other twin creeping up behind her. The film reaches an unusual ending where Deborah Benson kills the second twin by forcing her fist down his throat and choking him to death while, in an interesting reversal, nominal hero Gregg Henry sits whimpering on the sideline.

Lieberman also takes the time to make the characters in the film likeable, which is certainly more effort than most of the films in this sub-genre make. The film is shot in ruggedly real locations and natural landscapes (Oregon’s Silver Falls State Park) and the waterfalls, lakes, rivers etc have great natural beauty. And there seems no doubt about it that it is the actors present when we see them rolling down hillsides, crossing rope bridges etc.

Like Long Weekend (1978), there is also the theme that the party are being killed because of their ill-treatment of the environment with their loud music seen as polluting the peace and a pair of boots ominously seen coming down on a cigarette packet after heedlessly toss it away.