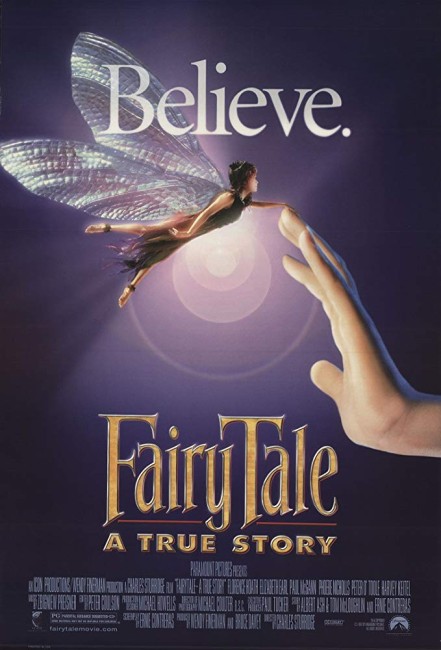 In 1917, twelve year-old Elsie Wright and eight year-old Frances Griffiths return from the bottom of the garden with photos taken on Elsie’s father’s camera that show the girls at play with fairies. Tests support the authenticity of the photos and the girls’ story is soon championed by the Theosophist movement. Celebrated author Sir Arthur Conan Doyle even writes a book that turns the girls into celebrities.

FairyTale: A True Story was the first of two films made in 1997 – the other being the much more challenging and intelligent Photographing Fairies (1997) – that took as their subject matter the Cottingley Fairies hoax, four purportedly authentic photos of fairies taken by two young girls in the 1920s. The hoax caused considerable furore in its day, taking in the likes of Sir Arthur Conan Doyle who published a non-fiction book in support of it with The Coming of the Fairies (1922). Most were sceptical about the photos, although the two girls insisted up until their deaths in the 1980s that there was no trick.

FairyTale: A True Story is a beautifully made film. It is impeccably directed by Charles Sturridge who has been responsible for such eminent British tv series as Brideshead Revisited (1981), Gulliver’s Travels (1995) and Shackleton (2001). The period detail is lavish and the garden is rendered in impossibly rich and verdant colours.

For all that, the film strikes one as, well … odd. You get the impression it wasn’t sure what approach to take to its subject matter. The plot sets up a faith-vs-reason debate – with Arthur Conan Doyle on one side and Harry Houdini (as played by Harvey Keitel who physically resembles Houdini rather well) on the other. It subtitles itself ‘A True Story’ but from the moment you see the film’s poster, which displays a fairy and the single word “Believe!” there are no doubts as to which side of the debate the film is on. And if that left no doubt then the various appearances throughout of fairies frolicking in the woods clinches the issue.

Oddly enough, the film – or at least the script – never wants to commit to these visions as being real. It persists in conducting its faith vs reason and ‘is it a hoax?’ debate regardless of the literalisations seen on screen – and the two seem at odds with one another. The scenes of the girls photographing the fairies all take place offstage, for instance. The end never one hundred percent commits itself to the belief but instead argues if the fairies aren’t true then at least they should be. Harry Houdini, we learn, is no longer the famous debunker of spiritualists and woolly-headed nonsense he was historically – we now learn he only debunked those who were dishonest and sought to defraud, while the film even has him stand up to say that beliefs like this are okay as long as they are conducted in a spirit of child-like innocence (something one would tend to argue is the very thing that gives rise to such beliefs in the first place).

The script does not exactly do itself a service by throwing the case for the fairies in the same bag as belief in angels, the Theosophists and the story of the Angel of Mons (a claim that angels appeared to guide a group of soldiers during World War I – a popular myth that in fact originated as a work of fiction by Arthur Machen). The friendship between Houdini and Conan Doyle is at least historically true, although in reality the two parted ways with the firmly sceptical Houdini disparaging Conan Doyle’s belief in spiritualism.

You feel that FairyTale: A True Story started out as being a period film about the incident but became hijacked by the decision to turn it into a children’s film. It has been crafted as an Edwardian children’s fantasy in the mini-vogue that has been made fashionable in recent years by the successes of The Secret Garden (1993) and A Little Princess (1995). This mini-genre tells realist children’s stories in lovingly detailed period surroundings that build toward eucatastrophic climactic transformations. In following this tendency, FairyTale departs historical account altogether for a wholly fantastic climax with the weasely sceptic being driven away by a ghost, fairies entering and transforming the girl’s bedroom and closing on the seemingly magically empowered return of one of the girls’ father’s (if you look carefully, an uncredited guest appearance from a well-known actor whose company also produced the film) after he went missing in action in WWI.

(Winner for Best Cinematography, Nominee for Best Musical Score at this site’s Best of 1997 Awards).