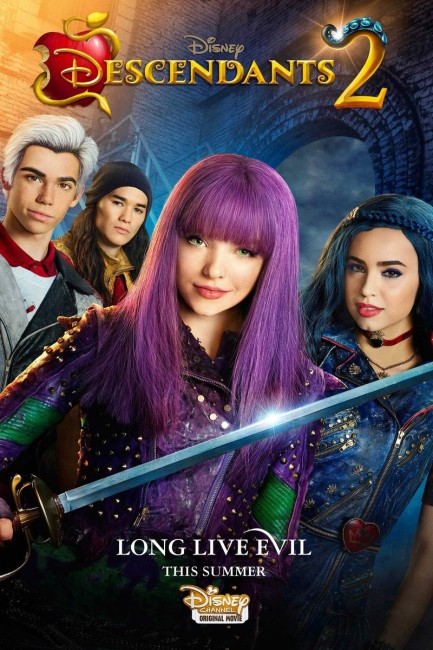 At Auradon Prep, Mal is preparing for her marriage to King Ben. Anxious about being perfect for him, she has been using magic spells to make herself blonde and a better cook. When he discovers this and reacts with upset, Mal concludes that she does not belong there and flees back to the island. The others set out to persuade her to come back. Ben insists on coming too but Ursula’s daughter Uma captures him and demands that the others bring her the Fairy Godmother’s wand as price for his release.

Descendants (2015) was a film made for the Disney Channel. It came with the intriguing premise of featuring the now teenage children of the classic Disney animated witches and villains. In the film, they were teens in exile on an island who were then granted the opportunity to go to boarding school on the mainland that the children of the princes and princes from the same fairytales attended. Unfortunately, the idea was placed in the hands of director Kenny Ortega who made one of Disney’s worst live-action films Hocus Pocus (1993) but crucially also directed the huge hit of the Disney Channel tv movie High School Musical (2006) and its sequels. This warped an intriguing idea out of shape into an agonisingly awful work pitched solely at the early teen demographic. Descendants 2 is a sequel.

There is probably no equivalent in words for the amount of infuriation I feel about the Descendants films where the original Disney fairytales are dragged down to the level of another High School Musical. The inanity, the pandering to teen audiences and mind-destroying banality of imagination that has gone into either film is something that would make a reviewer want to chew off their own limbs instead of watch another Descendants film. (As I write this one up, Descendants 3 (2019) has just wrapped shooting).

In the two years between watching the first film and this sequel, memory had faded sufficiently that I was able to be hit anew about how awful either film is. Within the opening moments, I ended up hating the characters all over again for their catty bitchiness and their absorption in their privileged upper-class lifestyles. All of the actors have been chosen for their looks rather than the ability to act. Some of them – Cameron Boyce and Thomas Doherty in particular – demonstrate no discernible ability to actually act beyond being able to pout and cattily mince. This is what you get when you construct something as a product designed entirely to appeal to a young teen demographic.

This is a film that cares nothing whatsoever about creating a basic suspension of disbelief in its world, only about is pandering to its demographic. There is the sheer mind-croggling inanity of scenes like the one where a dog that is hit with a spell to speak whereupon it immediately requests that someone scratch its butt and hands out advice like “You gotta man up.” The fact that the teen characters in the original were meant to be bad characters has now been all but forgotten bar excruciating song lyrics like “chillin’ like a villain.” A climactic fight scene involves good teen villain children vs bad teen pirates fighting with smoke bombs and slingshots in between exclamations of “Amazeballs” and someone being tickled “Itchy-kitchy-koo.” The finale of the show is an ensemble dance number that takes place on the deck of a ship where the actors splash about in two inches of water – it boggles the mind to think of what it would be like for a choreographer to pitch such an idea and have everyone to take it seriously.