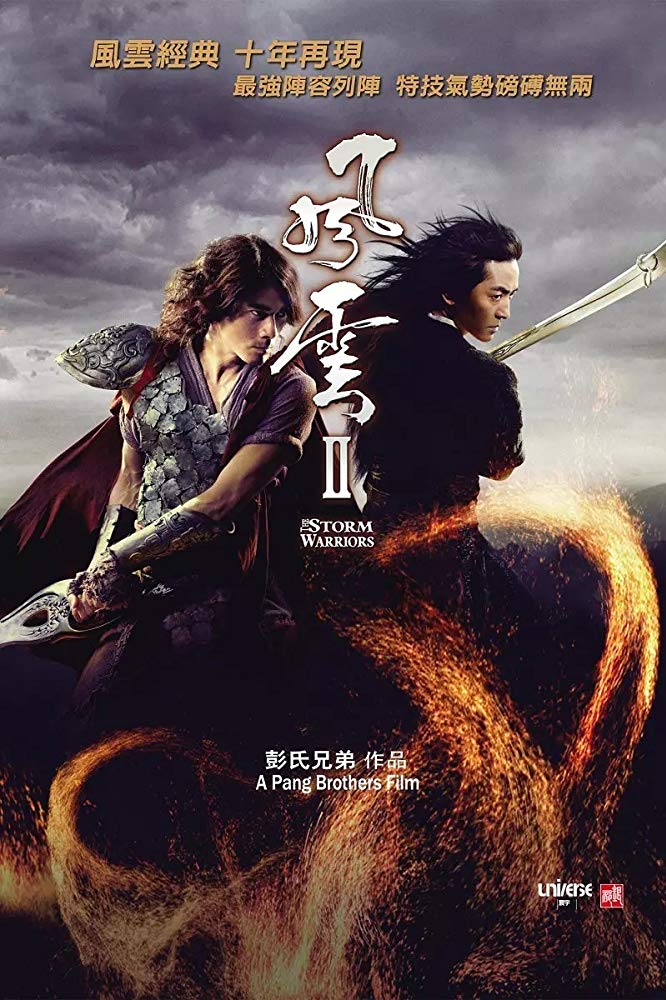 Lord Godless desires to conquer all of China. In standing up against him, Nameless is severely wounded. As Lord Godless sets out to subjugate all martial arts schools, Cloud and Wind appeal to Lord Wicked to help them. Lord Wicked explains that the only way they will win is if he teaches them the use of evil martial arts. Wind agrees and begins training in a number of new techniques designed to take him over to the dark side. Meanwhile, Lord Godless has taken the emperor hostage in an effort to gain entrance to the imperial Dragon Tomb and obtain the all-powerful Dragon Bone. In the fight to stop Lord Godless, Cloud must stand against the now evil Wind and bring him back from the dark side.

Storm Warriors was the second film adapted from the popular Hong Kong comic-book Fung Wan (1989– ). The comic-book was first adapted to the screen with The Storm Riders (1998) from director Andrew Lau and starring Aaron Kwok and Ekin Cheng. Storm Warriors was a sequel, even if the publicity department attempted to conduct the sophistry of claiming it was merely a work in the same universe adapted from a later comic-book story arc (something that was not helped by the sequel casting Aaron Kwok and Ekin Cheng in the same roles they played in the first film).

Storm Warriors has been placed in the hands of Thailand’s Pang Brothers, Oxide and Danny. The Pang Brothers emerged in the late 1990s and began to gain attention on the world stage after the hits of the crime film Bangkok Dangerous (1999) and the ghost story The Eye (2002). Both together and individually, the Pang Brothers have conducted a remarkable body of work within genre material and are some of the finest genre directors on the scene today. (See below for their other genre films). The Pang Brothers are such accomplished filmmakers that one was excited about their first venture into the Wu Xia film. Unfortunately, their taking on Storm Warriors results in a heavy disappointment.

What we have feels a very different film to The Storm Riders. The modern post-2000 Wu Xia film has always had an uneasy relationship in abandoning the amazing wirework that the genre was founded in in the 1980s and 90s and adopting modern CGI. Storm Warriors endeavours to do so but the efforts are lamentable. With The Storm Riders, a little CGI was starting to creep in but it was still essentially a standard wirework-driven film; but by the time of Storm Warriors, it has entirely taken over the film.

Indeed, Storm Warriors feel as though it was made by the Pang Brothers immediately after a round-the-clock repeat viewing of 300 (2007). Thus it is all slowed-down, sped-up action, highly stylised bodies in action and massed armies going into battle against digital backgrounds, and high-contrast colour saturations. While you can applaud the attempt to do something different with the Wu Xia film, it is so imitative of 300 that the visual style feels like a cliche.

More than anything, Storm Warriors feels as though the Pang Brothers have been brought in as hired guns. Even so, they fail to bring anything fresh to the genre and there is nothing in the film that feels standout or personal on their part. Usually any Wu Xia film has an astonishing way-out sequence that everybody remembers but there is none of that here – it just feels like a routine X-Men castoff with superpowered characters exchanging power blasts against cheaply obvious digital backgrounds.

The plot trades in the cliches of the Wu Xia genre – evil warlords; training in obscure martial artforms necessary to defeat the menace; the various confrontations and so on. Everything feels like it is following a well-worn plot arc and eventually disappears into a sameness. Even Aaron Kwok and Ekin Cheng, the two pretty boys of the original, are now well into their thirties and have lost the Asian pop star pin-up prettiness that drove the parts in the first film.