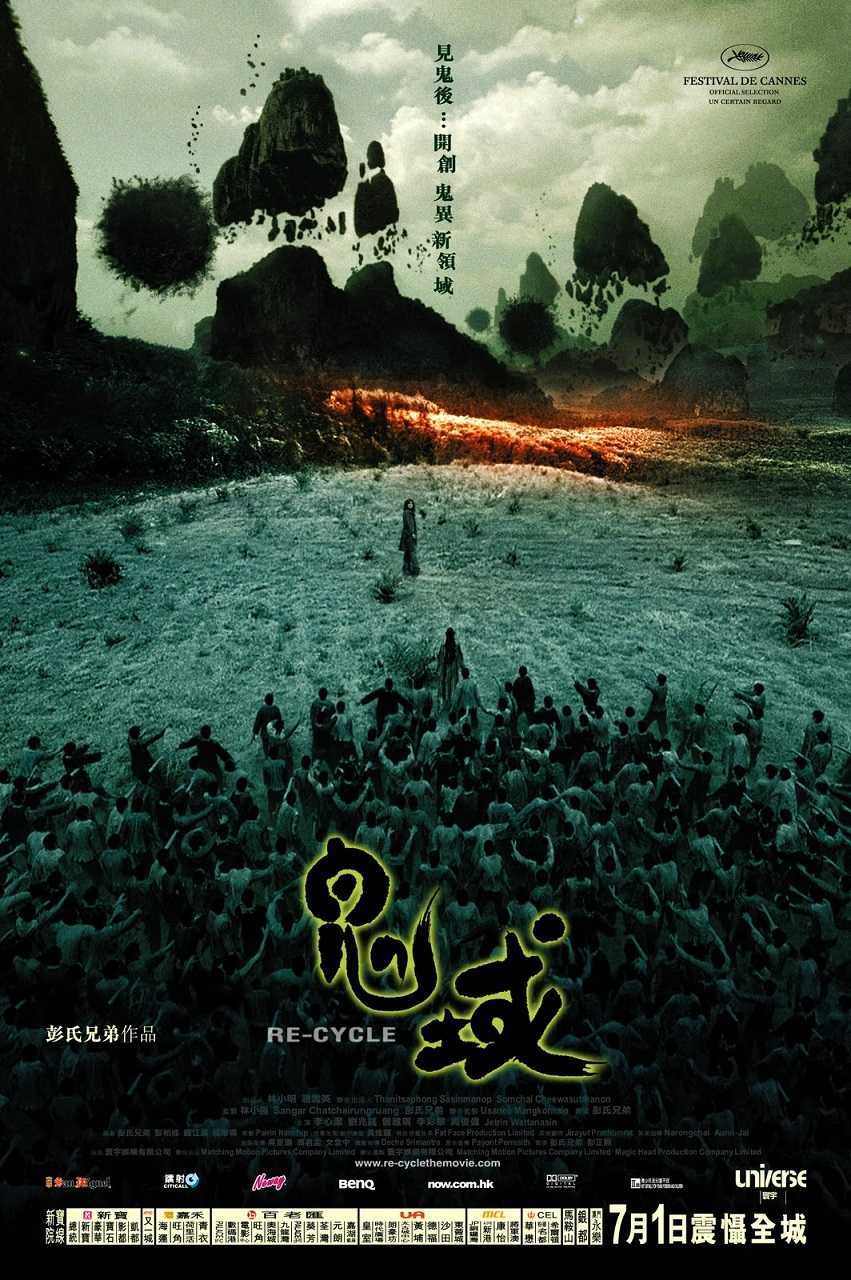 Ting-Yin is a successful novelist. To her annoyance, her publisher prematurely announces her next novel, the supernatural fantasy ‘ The Re-Cycle’, at a press conference. As she begins writing, Ting-Yin starts to see ghostly figures in her apartment and finds the writing is taking over from her and following its own course. Following directions that appear in the writing, she walks out of her apartment into a surreal wasteland world peopled by bizarre and terrifying creatures. There Ting-Yin encounters her uncle who tells her that she does not belong her here because this is the place where her forgotten and abandoned ideas dwell. Guided by a young child with no name, Ting-Yin tries to make her way across the dreamlike landscape to the point called Transit so that she can exit this world.

Thailand’s twin brothers, Oxide and Danny Pang, who usually direct and write together, are two of the most exciting genre talents in the world today. Oxide first appeared as director of the Buddhist destiny comedy Who is Running? (1997) and an episode of the horror anthology Bangkok Haunted (2001) and together the duo discovered international acclaim with the gangster film Bangkok Dangerous (1999) and then the enormous genre acclaim of the ghost story The Eye (2002). The duo went onto make a number of other genre films, including the sequels The Eye 2 (2004) and The Eye 10 (2005); the Wu Xia film Storm Warriors (2009); and a further ghost story The Child’s Eye (2010); as well as to write the screenplay for Omen (2003). They were imported to the US to make the ghost story The Messengers (2007) and the English-language remake of Bangkok Dangerous (2008).

Re-Cycle starts out seeming as though the Pang Brothers have jumped aboard the 00s fad for Asian horror and are trying to imitate the successes of ghost stories like Ring (1998) and Ju-on: The Grudge (2003). They have appropriated images central to the J-horror cycle – someone with long hair ominously standing in the shadows or croaking noises coming down the phone. Certainly, the Pang Brothers create some spooky effects during these scenes – Lee Sinje typing in her apartment and the papers in the wastepaper basket moving and then pages flying off the desk in the background, or of indistinct figures ominously lurking in the shadows, and a scene where a grandmother and child enter an elevator behind Lee Sinje and then sink through the floor. Lee Sinje gives a fine, fragile and withdrawn performance in the part.

However, about twenty minutes of the way in it turns out that Re-Cycle is not a ghost story at all. When Lee Sinje enters the secondary world, Re-Cycle suddenly turns into a fantasy film along the lines of other recent efforts such as The Great Yokai War (2005), MirrorMask (2005), Pan’s Labyrinth (2006) or Coraline (2009) about a heroine/child entering into a world of surrealistic and fantastical marvels, worlds that have frequently been construed as an opportunity for the makeup and production designers to go wild and come up with their most imaginative designs. It is at this point that Re-Cycle becomes something like a weird Asian version of The Neverending Story (1984) – albeit one that has seemingly been reconceived along the lines of a Japanese ghost story.

It is an amazing world that the Pang Brothers conjure up during these sequences. The world that Lee Sinje emerges into out of the elevator seems like a street of high-rise apartment blocks that exist in a post-holocaust landscape. She walks along the street and abruptly dozens of bodies fall down into the street from the apartment buildings and lie there twitching, before just getting up. She is pursued by tall, elongated figures with no faces that float along in blurred motion; she meets her uncle who sits in the middle of what looks like a desolate fairground between the apartment blocks and explains where she is while overhead a gigantic boat swings back and forth on a pendulum and empty kids strollers move of their own accord; she finds herself in a black-and-white forest filled with bodies hanging from the trees that come down revealing themselves as zombies with extended necks and jaws that stretch down to their chests, before she is saved by a little girl in red who rides in on a creaky giant mechanical horse and takes her away to a rusting graveyard of sinister giant toys.

The idea that is used to explain this world – that Lee Sinje has strayed into the realm of her own discarded ideas – seems a little slim to support such a fantasy. Mostly, the film feels like the Pang Brothers and their creative team having gone wild in terms of conjuring up wild sights. The subsequent sequences are never as wild and imaginative as that first ten minutes of her arrival in this world.

There are times that these become overextended – the film probably did not need a sequence where Lee Sinje has to venture across a bridge of zombies, or one where she is surrounded by zombies and saves herself by giving them flowers and money. Although the climactic scenes where Lee Sinje arrives at Transit where shattered mountains hang suspended in the sky, where the zombie army that follows her turns into photographic Bullet Time slices, and everybody is blown away and dissolves into a storm of dust, do recapture something of these original scenes.

There is also the twist ending [PLOT SPOILERS]. Here the Pang Brothers reveal themselves to be conducting something akin a Right to Life commercial where it is revealed that Yaqi Zeng, the young girl in red that accompanies Lee Sinje throughout her journey, is in fact the child that she conceived but aborted. Suitable guilt and anguish ensues on Lee Sinje’s part. As with The Eye 2, this shows that the Pang Brothers, both of whom have demonstrated Buddhist sympathies elsewhere, are strongly pro-life in their views.

[PLOT SPOILERS CONTINUE]. There is a further twist ending of somewhat gimmicky, albeit undeniably effective, M. Night Shyamalan-esque nature that plays on the seeming throwaway line that Lee Sinje had made earlier at the press conference about putting something of herself into her works where Lee Sinje emerges into her apartment to find herself there and we realise the person that was in the dreamworld is in fact her alter ego that exists in the book she is writing.