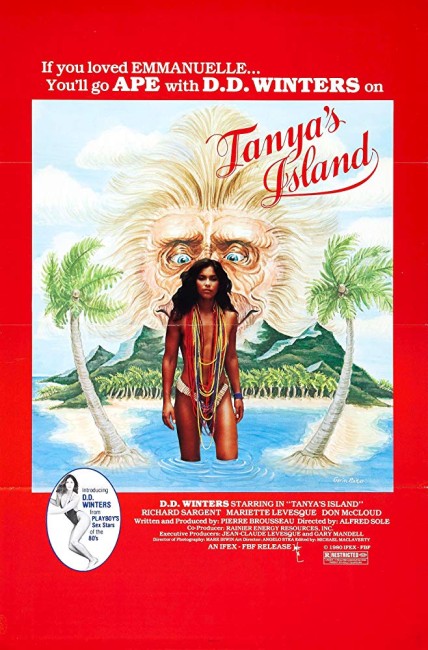 Tanya, a successful fashion model, is frustrated with her artist boyfriend Lobo who pushes her away from him. Dreaming in her apartment, she opens a door onto a tropical island paradise where she and Lobo live. In search of new subjects to paint, Lobo suggests they move to the other side of the island. In her exploration of the new area, Tanya finds a grotto inhabited by an ape. The ape proves strangely friendly and she names him Blue. Lobo follows Tanya as she goes off to be with Blue. Seeing them together makes Lobo insanely jealous and he responds by trying to first imprison Blue and then creating a stockade to confine Tanya.

Tanya’s Island was the second film from Alfred Sole. Sole made only three films as director, four if you count his earlier adult film Deep Sleep (1972). He gained a certain cult following with the Catholic psycho-thriller Communion/Alice, Sweet, Alice (1976) and subsequent to this went on to make the slasher film parody Pandemonium/Thursday the 12th (1982). He subsequently dropped out of direction but is still employed to this day as a production designer. When you consider Sole’s three films – a psycho-thriller, a work of erotica and a not-very-funny genre parody – it is hard to think of a director whose oeuvre is more diverse.

The star of the film was the 21-year-old Canadian-born model Denise Matthews who bills herself on screen as D.D. Winters. Subsequent to this, Winters was discovered by/became involved with Prince who renamed her Vanity and promoted a career for her as a pop singer with the band Vanity 6. Vanity 6 put out one album and Vanity had a minor solo career as a singer subsequent to that but her greatest success during the 1980s was in a series of acting roles in films such as The Last Dragon (1985), 52 Pick-Up (1986), Never Too Young to Die (1986) and Action Jackson (1988). In 1992, she underwent a conversion to Christianity after being hospitalised for kidney failure (due to drug use), renounced her past and the Vanity name, and devoted her life to preaching. She died in 2016 at the age of 57 from further kidney problems.

Alfred Sole directs in undeniably arty set-ups – lovemaking on a beach as waves crash over Winters and Richard Sargent’s bodies – and the Puerto Rico locations are beautifully photographed. If nothing else, Sole takes the erotic undercurrents of King Kong (1933) to their logical extent. You could draw similarities between Tanya’s Island and Walerian Borowczyk’s The Beast (1975), which similarly had a woman liaising with an ape-like beast of unspecified nature. (Come to think of it, this is a film where you cannot help but think that Borowczyk would have had a field day with the material). The Beast could have been an inspiration for Tanya’s Island, although you have a suspicion that the filmmakers were trying to exploit the fascination with the big hit of the Brooke Shields desert island romance The Blue Lagoon (1980), which came out five months before this.

The main complaint I would make of Tanya’s Island is that it exists more as an outrageous one sentence premise than it does as a film. The promised love affair between the girl and the ape never really happens. Rather the film is about D.D. Winters/Vanity being caught between controlling human boyfriend Richard Sargent – not to be confused with Dick Sargent, the replacement Darrin from tv’s Bewitched (1964-72) – and the freedom and attention offered by Blue the ape. Most of the drama in the film consists of Sargent getting jealous and trying to either eliminate/cage the ape or else imprison Vanity inside a stockade. Both male characters are allegorical – the human wanting to own and confine her and the ape seen as being closer to nature and more caring and attentive. Amusingly, the end of the film has D.D. Winters saying “screw it” to both of the males and wanting to be on her own.

Rick Baker, Hollywood’s expert at creating ape suits in films like King Kong (1976), Greystoke: The Legend of Tarzan, Lord of the Apes (1984) and Planet of the Apes (2001), and Rob Bottin who was still to be discovered as one of the 1980s primo makeup effects artists with his work on The Howling (1980) and The Thing (1982), certainly deliver a very convincing ape suit.