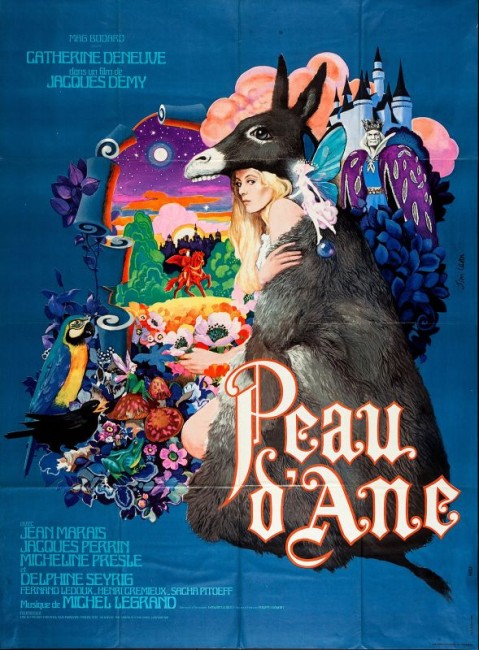 Before she dies, the king’s wife makes him promise that he will only ever marry a princess that is more beautiful than herself. After he recovers, the king sets about looking for a new wife but can find no princess of adequate beauty until he sees a portrait of his own daughter. He decides that he is in love and will marry her. The princess, not knowing what to do, flees and begs advice of a Fairy Godmother. The Fairy Godmother tells the princess to request that the king make her a wedding dress the colour of the weather. When the king’s tailors succeed, the Fairy Godmother gets her to ask for more extravagant requests. However, the king is able to provide each of these and so the Fairy Godmother then suggests he provide the skin of the donkey that excretes the coins and jewels that provide the kingdom’s wealth. Wearing the donkey skin, the princess flees into the forest where she moves into a cottage and accepts a job as a lowly scullion. The villagers regard her as hideous because she wears the donkey skin. The prince of a nearby kingdom comes by and observes the princess in her natural beauty and falls in love with her. He will think of nothing but her and falls ill. When his parents try to help, he asks that his courtiers get Donkey Skin to make him a cake. The princess places a ring in the cake. Finding the ring, the prince then conducts a quest the kingdom over for the one woman that can wear it.

Donkey Skin is one of the films in the oeuvre of French director Jacques Demy. Demy emerged around the time as the French New Wave of the 1960s with the light romantic film Lola (1961). Unlike most of the other directors of the New Wave, Demy’s interest was not so much in breaking down narrative, conducting experiments in surrealism or engaging in crypto-intellectual gamesmanship but simply in creating frothy whimsies. His most famous and celebrated film was the musical romance The Umbrellas of Cherbourg (1964). Demy ventured into fantasy cinema upon several occasions with Donkey Skin and The Pied Piper (1972), both adaptations of fairytales, and the self-explanatory comedy A Slightly Pregnant Man (1973).

Donkey Skin is an amusing eccentricity that sits between the surrealist experimentalism of the New Wave directors and a classic fairytale. If one wanted to look to similar films, you could perhaps consider the gonzo fairytale that we saw in More Than a Miracle/Cinderella – Italian Style (1967). You could perhaps also see something of Jean Cocteau’s Beauty and the Beast (1946) – and to reinforce the Beauty and the Beast connection, Demy casts Jean Marais, Cocteau’s Beast and real-life gay lover, as the king – although not really. Cocteau was more interested in capturing the pure-heartedness of the fairytale, Jacques Demy just wants to have offbeat fun. Donkey Skin does occasionally touch basis with Cinderella – the princess does lead a life as a scullery person for a time, there is a kingdom-wide search for the person who wears a ring (as opposed to a slipper) – but the story is also widely variant.

The film is designed with the colourful extravagance of something like Barbarella (1968), also from the same French production company Marianne. The servants in the princess’s castle come with their faces painted blue – even the horses are painted blue – while by contrast the prince’s courtiers are painted in red. The castle comes with bizarre sets where ivy grows on the inside walls – there is even a blue nude wound into the ivy. The dead queen is buried on a bed of roses inside a giant glass snowglobe. The throne is crafted like a white cat.

The prince and princess conduct a romance through a field filled with sheep, blossoms, laden banquet tables waited on by a livery man wearing an animal’s head mask and down a river on a boat covered in flowers and burning braziers. The film is filled with all manner of wacky touches – the donkey whose skin the princess takes is one that excretes coins and jewels; while at one point we get a book of poetry from the future (ie. contemporary poetry). The end of the film surreally has Jean Marais’s king and the fairy godmother fly in by helicopter to attend the wedding.

The small problem is that Jacques Demy is making Donkey Skin with a far lesser resources to hand than Barbarella did. With a little more in the way of budget, Donkey Skin could have flown with a real extravagance. As it is, it looks B-budgeted in terms of its imagination. The elements of fantasy come with a simple magic – the dresses the colour of the weather and the sun simply have had natural scenery projected onto them. In one slightly tatty effect, Delphine Seyrig’s Fairy Godmother visits the princess by entering through the ceiling, which is represented by her tearing her way through a sheet of coloured paper and then the same footage run in reverse for when she ascends.

On the other hand, there is a beautifully dreamy sequence where Catherine Deneuve escapes from the palace running in slow-motion as the gates open in front of her, discovering a waiting carriage lined with white feathers that takes off through the air. When morning comes, she finds herself sleeping on a bed of hay on the back of a cart and passes through the village where all the villagers stand frozen in time to meet an old lady who has a disconcerting habit of coughing up frogs while talking to her. There is a lovely score from Michel Legrand, although this does contain some songs that slow the show down.

In the end, Donkey Skin is a film with eccentric charms and some occasional visual poetry. That perhaps is the sum of it, rather than it being a great work. It never sweeps us up in the romance or the drama. Even the initial menace of the amorous father is forgotten about as soon as Catherine Deneuve escapes from the palace and he just reconciles with her at the end with all that has transpired seemingly forgotten.