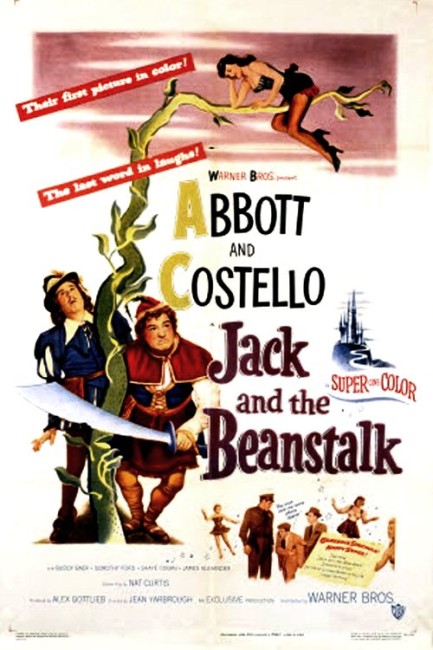 Two unemployed idiots take a job babysitting the mischief-making Donald. In an attempt to calm him, Jack lets Donald read him the story of ‘Jack and the Beanstalk’ but drifts off to sleep in the middle of it. In the story, the dim-witted farmboy Jack is given the family cow by his mother to take into the village to sell. Instead, Jack is tricked by the butcher Dinklepuss into swapping the cow for some magic beans. When planted, the beans grow into a giant stalk stretching up into the clouds. Climbing the beanstalk, Jack and Dinklepuss arrive at the castle of the giant that is terrorising the region, only to be captured. Also imprisoned there are Prince Arthur and Princess Eloise, who are betrothed. The two have never met one another but have fallen in love each thinking the other one is a commoner. Jack and Dinklepuss attempt to escape and defeat the giant.

Jack and the Beanstalk was one of Abbott and Costello’s comedic outings – one of 43 films they made between 1940 and 1956. (See below for their other genre entries). It was the first of only two ventures the duo made in colour – apparently Universal would not extend the cost of making the film in colour and so Abbott and Costello formed their own company and financed the film themselves. It was the only film in which they sing.

Jack and the Beanstalk is also one of the most boring of their films. Most of the Abbott and Costello films are lowbrow comedic knocks but this tries to tie their antics to a run through of the Brothers Grimm fairytale. Whereas their previous films were about the two of them having fun with pirates, cowboys, monsters, in the army, navy and foreign legion or planting their tomfoolery into different settings, this just feels like their gags have been squeezed into and are subservient to the dictates of the fairytale. The result ends up a stodgy combination of neither – The Three Stooges had the same problem a few years later when they appeared in Snow White and the Three Stooges (1961).

The musical interludes and runnings about the castle seem to go on forever – one can safely go to sleep and wake up some time later not having missed any significant plot development. The gags remain the usual idiocy – long extended sequences running around the castle, swinging on the chandelier, trying to escape via catapults and being chased through a log in the forest by the giant, and dealing with exploding eggs from hens that have been fed gunpowder. There is one moderately amusing sequence with Lou and Dorothy Ford dancing in which they proceed to demolish one another with their mutual clumsiness.

Like The Wizard of Oz (1939), the film is shot in sepia, opening out into colour (Super Cine Color) for the fantasy scenes. Unfortunately the budget is such that the colour only serves to highlight the tattiness of the sets. The photography is not that good and seems out of focus at times. There’s no real conviction or imagination to the sets or costuming – the costumes feel like they come from central wardrobe where many of the cast have been squeezed into ones that do not necessarily fit. As the prince, James Alexander walks through the entire film with a frozen expression as though he would rather be elsewhere.