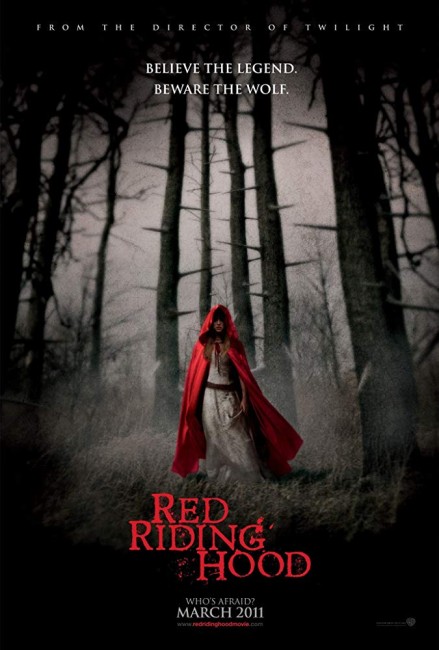 In the remote mountain village of Daggerhorn, young Valerie loves her childhood companion, the woodcutter Peter. Valerie then learns that her sister Lucy has been killed by a werewolf that plagues the area. Valerie’s parents also tell her they have decided that she is to be married to the blacksmith’s son Henry Lazar, who is consider a better marriage prospect than Peter, much to Valerie’s upset. The locals form a group to hunt down the wolf. They track it into a cave on the mountainside and return with its severed head. As they prepare to celebrate, the notorious monster hunter Father Solomon arrives in the village. He states that all they have killed is an ordinary wolf and that the real werewolf is one of their number. It is also the Blood Moon, the time when the wolf can bite another person and create more of its kind. He is proved right as the wolf attacks during the festivities. However, the wolf is able to talk to Valerie in her mind, saying it will spare the village if she will come away with it. Father Solomon places Valerie on trial as a witch and then leaves her out as a lure for the wolf. Making an escape, she heads to her grandmother’s cottage in the forest, unsure who among the village is the wolf’s human form.

One of the notable aspects of these modern fairytales is that they take the original tales away from children’s stories and present them in adult terms. One suspects that the driving reason behind this spate of fairytale adaptations is that those responsible have turned to fairytales seeking to find the next Twilight (2008). There are an ominous number of Twilight connections behind these films, or at the least points where you can see that the films are seeking to emulate Twilight – Red Riding Hood comes from Twilight director Catherine Hardwicke and features Billy Burke who played the heroine’s father in the Twilight series playing the heroine’s father here, while Taylor Lautner was purportedly sought for the role of Peter at one point. Elsewhere, Kristen Stewart has been cast as Snow White in Snow White and the Huntsman, while the casting call that went out for Beastly was purportedly to find the “next Robert Pattinson.”

The origin of the story of Little Red Riding Hood is not fully known. It was first written down by Charles Perrault in 1697 who introduced the idea of the red hood, while the version we draw on today was put down by the Brothers Grimm in 1812. Most versions of the story involve a young girl and her journey through the forest to visit her grandmother where she meets a wolf who befriends her and then races on ahead, devours the grandmother and pretends to be her when Little Red Riding Hood arrives, before she is saved by a huntsman. Some of the details of the story change between tellings, with earlier versions being much more grislier and modern versions having cleaned the story up considerably.

The irony of this is that the majority of Little Red Riding Hood films have been deconstructions of the story. These include the likes of Neil Jordan’s The Company of Wolves (1984), which turned the fairytale into a dark Freudian dream about werewolves and female sexuality, or the animated Hoodwinked! (2005), which offered up an exceedingly silly deconstruction of the elements. There have been other efforts such as Freeway (1996), which translated the basics into a modern story about a wayward teenage juvenile delinquent, the horror film Red Riding Hood (2003) or Red: Werewolf Hunter, which had Little Red Riding Hood now grown-up as a werewolf hunter, and one of the episodes of Trick ‘R Treat (2008), which offered up a twist that reversed expectations about who was hunting whom. Other films such as the anime Jin-Roh: The Wolf Brigade (1998) and the French slasher film Deep in the Woods (2000) explore the wolf as a metaphor, while everything was spoofed in the gay werewolf film The Wolves of Kromer (1998).

The problem that any feature-length film adaptation of Red Riding Hood is stuck with is that there is not much to the story – young girl travels through the forest, meets wolf, he races ahead and gets there before her to impersonate her grandmother. Most of these have to expand out a prior relationship between Little Red Riding Hood and the wolf or place everything in the context of some backstory – in the Cannon version, for instance, there was a whole other drama about the rightful king being usurped by his evil twin brother, Little Red Riding Hood’s mother being banished to live as a peasant and the wolf being the evil brother’s manservant.

I was interested to see what Catherine Hardwicke would manage to wring out of Red Riding Hood. In the script from David Leslie Johnson, who previously wrote Orphan (2009) and subsequently Wrath of the Titans (2012), The Conjuring 2 (2016) and Aquaman (2018), the basics of the fairytale have been expanded out considerably. Red Riding Hood is upped in age from her usual pre-adolescence to be cast with a 26 year-old Amanda Seyfried. More so, the story now gets the addition of the character of a wolf hunter (played by Gary Oldman in a grandly theatrical performance) who arrives in the village and determines to root out the identity of the wolf, instituting increasingly Inquisition-styled tactics in his quest.

This turns the middle two-thirds of the film more into a werewolf whodunnit – one kept thinking of the Amicus film The Beast Must Die (1974) – with the story contained inside a relatively enclosed space as almost all of the major characters fall under suspicion as to whether or not they might be the wolf. The script is even radical enough to suggest at one point that the grandmother herself (Julie Christie) might be the wolf. The revelation of the wolf’s identity is a moderate surprise with David Leslie Johnson’s script creating an elaborate web of backstory and connection between all the characters to justify this.

This has the effect of displacing the actual plot that makes up the traditional telling of the fairytale to one side. Amanda Seyfried does make her journey through the woods to her grandmother’s cottage at the end of the film and this is the point we discover the identity of the wolf. On the other hand, the journey through the forest is relatively brief and not built up into what you felt it had the potential to be dramatically.

Amanda Seyfried does wear her red riding hood and carry her traditional basket (although this now contains weapons for despatching the wolf). The sequence is surprisingly absent of any scene where the wolf detains and toys with her along the journey, although her love interest (Shiloh Fernandez) does briefly jump out and plead with her to come away with him where we are not sure if he is the wolf or not. The arrival at the cottage and her being saved by the woodsman happens as per tradition, although not much is made out of the wolf impersonating the grandmother. We do get the “what big eyes you have, grandmother … what big ears you have, grandmother … what big teeth you have,” but this has now been shuffled to earlier in the piece and becomes a dream precognition that Riding Hood has of her grandmother in danger.

I was interested to see what Catherine Hardwicke would do in taking on board a full flight into fantasy. Prior to Twilight, her greatest successes had been in terms of grittily real teenage dramas – Thirteen (2003), Lords of Dogtown (2005) and arguably The Nativity Story (2006). Her influence on Twilight was something very different to what the sequels made the books into. While the sequels pumped up the teenage poster boy aspect, lush romanticism and CGI effects, Catherine Hardwicke gave a resolutely down-to-earth treatment that largely eschewed special effects, rooted the story in a credible everyday smalltown environment and concentrated on the romance between the principals. Her directorial emphasis seems to be more character driven and realist than overtly fantastical so it was interesting to see how she would handle a full-fledged fantasy here.

The results are mixed. The film opens with a dazzling aerial shot that is part live-action, part CGI as it sweeps across the mountains, down into valleys, following rivers and waterfalls and passing forests to arrive at the village nestled on the mountainside. This certainly starts the film well. On the other hand, the first scene with the young Valerie and Peter catching a rabbit in the forest ends up distracting because the lighting of the forest glade has been hyper-realised to the point that the scene seems artificial and unreal.

A similar problem occurs in other scenes where the village sets and some of the costumes hit the same sense of artificiality and unreality, one that is constantly distracting you from a necessary suspension of disbelief and reminding you that you are watching a film. Perhaps the worst offender here is Billy Burke who glowers uncomfortably through unconvincing designer surly peasant stubble and tousled hair. The werewolf effects are about on the same level as those in New Moon (2009) and Eclipse (2010) – namely that the werewolf looks like one big CGI effect rather than a convincing wolf.

On the other hand, while Catherine Hardwicke and the fantasy milieu make for awkward bedfellows, when she gets to do what she does well, Red Riding Hood works well. You get the sense that she took on Red Riding Hood because it allowed her to get her teeth into something a bit darker than Twilight – where the Twilight series shouts its chastity and the virtue of the sacred institution of marriage from the treetops, Red Riding Hood has marriage treated as a commodity that has gotten in the way of people finding love and shows the villagers holding a dark morass of secrets behind their vows.

Similarly, Hardwicke gets to open up on the sexuality that Twilight insisted on holding in check (albeit in a PG-13 way where Amanda Seyfried and Shiloh Fernandez exchange much in the way of smouldering looks and eventually make out but are interrupted before he gets to undo her top button). Indeed, where Twilight came with a hidden Mormon agenda, here the church become the villains of the show.

The increasingly underrated Amanda Seyfried does well in the title role – with wide eyes and milk complexion, she has a face that seems the soul of innocence embodied. Less successful is Shiloh Fernandez’s attempt to come across as a bad boy version of Robert Pattinson. He is all surly darkly sexual glowering but not too much more, certainly he never seems to ache with the soulfully romantic sincerity that Pattinson did in Twilight.