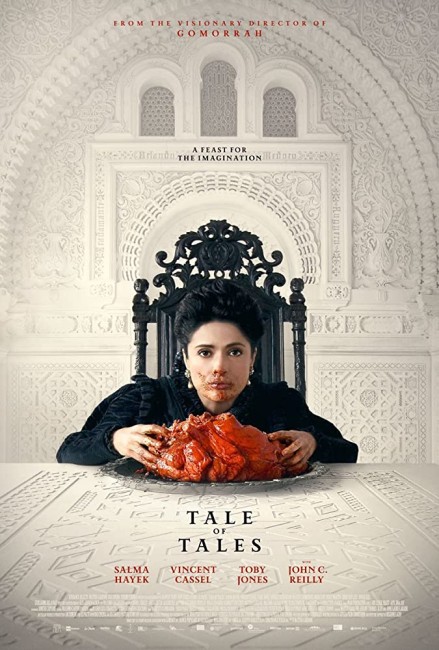 The Queen:- The Queen of Selvascura is eager to have a child. A necromancer tells her if The King slays a sea monster and its heart is cooked by a virgin, she will give birth. The King sets forth and kills the sea monster but is himself killed in the process. The sea monster’s heart is cooked by a virgin servant girl. Both she and the queen become instantly pregnant and give birth to two identical albinoid boys, Elias and Jonah. Growing up, the two boys become best friends. However, the queen forbids Elias from seeing Jonah because the friendship is below his station. The separation causes much heartbreak for the two boys. The Two Old Women:- The King of Roccaforte dallies with many women but then becomes captivated by the beautiful singing he hears from out the palace window. He determines the singer must be his. However, the singer is Dora, one of two aging sisters. Dora refuses to let the king see her appearance, while she tries in vain to make herself look young. She eventually agrees to go to spend the night with him if the lights are kept off. However, when he sees her true face in the morning, the king has her thrown from the window. Landing in the forest, Dora is found by a witch who casts a spell that makes her look young again. The king comes upon her there, is entranced and decides to marry her. Dora invites her sister Imma to the wedding but Imma proves an embarrassment when Dora tries to tell her they cannot be together anymore. The Flea:- The King of Altomonte becomes obsessed with a flea and makes it his pet, feeding it until it becomes the size of a dog. It then dies. Distraught, the king offers the hand of his only daughter Viola to whoever can identify the flea’s hide. This is identified by a hideous and hulking ogre. Viola is forced to become its wife but tries to make every opportunity to escape.

Giambattista Basile (1566-1632) was a Neapolitan soldier who gained fame as a poet in various Italian courts of the day. Basile is most remembered for The Tale of Tales, or Entertainment for Little Ones, which was published in two volumes in 1634 and 1636 following Basile’s death, and is collectively known as Pentamerone. This was the first collection of fairytales published anywhere in the world. Many of the tales that Basile put down influenced the Brothers Grimm and Charles Perrault – The Tale of Tales contains some of the earliest recorded and embryonic versions of Cinderella, Sleeping Beauty and Rapunzel. This film is an adaptation of three of the 49 stories that appear in The Tale of Tales.

Tale of Tales was the eighth feature film for director Matteo Garrone. Garrone gained a good deal of attention with his crime film Gomorrah (2008), which won the Palme d’Or at the Cannes Festival and enjoyed much acclaim in arthouse release. Aside from that, he has made other works that have enjoyed some success such as The Embalmer (2002), which is not a horror film despite a title that sounds like it should be, First Love (2004), which is a horror film about anorexia despite sounding like a romance, Reality (2012) and Reality (2012). Garrone subsequently returned to genre material with a superb live-action adaptation of Pinocchio (2019).

Garrone creates a beautifully lush film. He has chosen spacious and wide-open locations in various real castles and historic places – this looks nothing like the castle and courts that we get in modern studio backlot fairytale films. Garrone has also made the film for English-language audiences, shooting in English and importing a number of international name stars, including Salma Hayek, John C. Reilly, Toby Jones and Vincent Cassel. And the film comes with some gorgeous visuals – Hayley Carmichael lying in the forest adorned in a red bedspread, the young Stacy Martin found nude covered in a gorgeous mat of red hair, the ogre climbing the mountainside with Bebe Cave on his back.

Matteo Garrone also creates a film that is very different to what you expect of traditional fairytale adaptations. Certainly, we have magic kingdoms, princes and princesses, witches, ogres, transformations and so forth. But the tales are anything but the traditional ones of love wins out, or even the modern dark romances for adults that we have had in the 2010s. At most what we have are more along the lines of Middle Eastern morality tales where characters receive cruel twists of fate.

The film tells three different stories. In most films of this type, they would take place sequentially but for some reason the telling of each here is interspersed with the other. There is no particular order to the tales – the order I have given them above merely follows the way they are listed on the end credits.

The Queen works well. The scenes with the necromancer and John C. Reilly heading off to slay a sea monster are perfect pieces of heroic questing, before the story abruptly kills Reilly and then doglegs off in a different direction. This is probably the weaker of the stories by a fraction. Salma Hayek doesn’t quite get enough screen time and the show fails to make the best use of her great screen presence. The two boys are fascinating together and their separation comes tragically. However, the climactic fight with the bat creature feels like a payoff that fails to fully satisfy, least of all in that it leaves Salma Hayek’s fate unspecified.

The Two Old Women is a fascinating piece that would normally play out as a children’s tale but is relayed in adult terms. What strikes about the piece is the contrast and cruelties – the doddery Shirley Henderson wandering about the palace trying to find her sister and not understanding as Stacy Martin tries to shoo her away as an embarrassment; the pure nastiness of the ending where Henderson takes her sister’s claims about the rejuvenation process seriously and wanders through the town offering to pay people to flay her and we then see her staggering back skinned.

The episode I felt worked the best was The Flea. Like The Queen, this is a story that heads in a particular direction then veers off to tell a different story. The first part involves the peculiar relationship between king Toby Jones and his pet flea, which starts as a normal flea and we then rather alarmingly see grown to the size of a large dog. This thread of story is then abandoned and we jump into another in which Jones holds a competition for his daughter’s hand for whomever can guess what type of skin the flea’s hide is, which is won by an ogre.

The best scenes in the episode are the ones with the princess attempting to escape the ogre’s mountainside cave, her salvation from a travelling band of circus gypsies, being carried away by the tightrope walker, and pursued by the ogre, reaching a very satisfying end with her finally escaping the ogre’s control and returning bloodied to her father’s court.