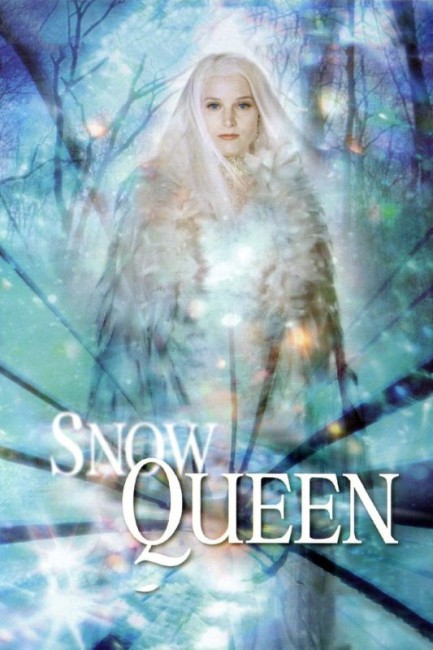 Kai comes to work as a bellboy in a small town hotel run by the widower Wolfgang. Kai duly becomes attracted to Wolfgang’s daughter Gerda. One night while Kai is skating with Gerda, a flurry of snow blows something into his eye. Afterwards, Gerda sees that Kai has changed and become cold and cruel to others. A mysterious woman in white comes to stay at the hotel and seems to understand what has happened to Kai. He makes the decision to depart with the mystery woman but leaves a note for Gerda, begging help. The woman whisks Kai away to a frozen-over replica of the hotel in the snowy remote north. There she makes him her prisoner, guarded by a talking polar bear, until he repairs her mirror, which has broken into hundreds of tiny shards. Kai starts to surrender to the Snow Queen’s seductions as she determines to make him forget Gerda – but what he does not know is that the last piece of her mirror is inside his eye and in claiming the Snow Queen’s kiss he will lose his life. Meanwhile, Gerda sets out to rescue Kai before the winter solstice. Her journey takes her through the realms of the queens of Spring, Summer and Winter, all of whom try to make her stay within their thrall.

Snow Queen comes from the US company Hallmark Entertainment, a division of the Hallmark greetings cards company and the US Hallmark cable channel. Among various other historical and Biblical productions, generally pitched at family audiences, Hallmark have made a series of adaptations of fairytales, mythic legends and popular sf/fantasy stories. Those of genre interest are listed below.

The mini-series here is mostly faithful to the Hans Christian Andersen fairy-tale. It follows the general plot wherein the Snow Queen abducts the boy Kai/Kay and takes him to her palace at the North Pole after he gets a shard of the broken mirror in his eye, and of the girl Gerda setting forth on a journey to find him and passing through various encounters. The mini-series replicates most of the episodes from Gerda’s journey in the fairytale – the encounter with an old lady in a cottage who wishes Gerda to stay, and the meeting with the robber daughter and her drunken mother. Although the middle episode in the Hans Christian Andersen version where Gerda visits a highly intelligent princess has been twisted out of shape and now made into the visit to a queen in an Asian-styled palace where Gerda is accompanied by an annoying apprentice magician. There is a talking reindeer but he does not fly Gerda to the North Pole and we do not meet the Finnish and Lap women who help Gerda out on the last step of the journey in the Hans Christian Andersen version.

The two most notable changes over the fairy-tale are, first, that the mini-series bumps the ages of Kai and Gerda up from young children to people in their late teens and adds a strong romantic attraction that was not there in the original story. The other aspect that the teleplay adds is that each of the realms that Gerda visits are now ruled over by the queens/princesses of the other three seasons, whereas in the original story they seemed to be no more than random picaresque encounters along the journey. This does involve the Robber Girl episode being awkwardly stretched to accommodate the Autumn Queen – nevertheless, all of this is conducted with an admirable cleverness that gives the story much stronger thematic unity.

Less can be said for the mini-series itself. The director chosen is David Wu, an émigré from Hong Kong who now resides in Canada. In Hong Kong, David Wu had developed a name as an editor on some of the best films from John Woo and Tsui Hark. Wu later had made several films as a director, the best-known being The Bride with White Hair 2 (1993) and since leaving Hong Kong has directed a number of tv movies and episodes of various Canadian-shot American tv series and subsequently went onto make Hallmark’s Merlin’s Apprentice (2006) and the fantasy mini-series Son of the Dragon (2006).

Most of Hallmark’s series have had a lush fantasy to them, where the respective directors and effects teams conduct a beautiful job of giving literal life to the fantasy and/or rooting the stories in a realistic milieu. Snow Queen is one case where Hallmark’s budget is certainly adequate but the entire production ends up seeming routine and rather flat. The production design – from the hotel set in what looks like a Lap-designed village, which is then, with a clever economy, covered in snow to act as the Snow Queen’s palace; to the rustic spring cottage of the Spring Queen; and the gold and pink lit Chinese-themed palace of the Summer Queen with animate shadows dancing on the walls – is all fine.

However, David Wu never gives Snow Queen much fantastique life. For one, it is long and slow moving – the story, for instance, devotes more than half-an-hour to the scenes of Jeremy Guilbault and Chelsea Hobbs becoming attracted, fooling around the hotel, going skating and so on, most of which is told in vignettes and lap dissolves. At most, these scenes seem to vanish into a wistful blandness. None of the individual picaresque episodes come to life. They seem perfunctorily told, with nothing invested in them that makes any of them fly with a full flight of the imagination. The story only comes into its own in the last half-hour where the scenes of Chelsea Hobbs struggling through the snow, the flashbacks to The Devil creating the mirror and The Snow Queen causing it to fall, Kai’s realisation that he will lose his life with the Snow Queen’s last kiss, and Gerda’s tragic sacrifice, which at last gives the mini-series a mythic, epic flourish. However, by that point, having sat through nearly three-and-a-half hours of a prosaic fantasy that never comes to life, this comes a little late to save the show.

None of the cast stand out in any astounding way – the two actors cast as the young lovers, Jeremy Guilbault and Chelsea Hobbs, are certainly adequate in the part but no more than that. As the Summer Princess, Kira Clavell gives a non-acting performance that is irritatingly over-enunciated, while Alexander Hoy’s perky presence as an Asian magician seems to verge on a racial caricature. Although, it should be said that Bridget Fonda, one of the most glacial and unfriendly seeming actresses in the business, is cast to perfection as The Snow Queen. The best character in Snow Queen is that of a talking Polar Bear, a creation of Jim Henson’s Creature Shop, which is beautifully realised both in terms of animatronics and character shadings, caught between gruff menace and a grudging admission of unrequited love for The Snow Queen.