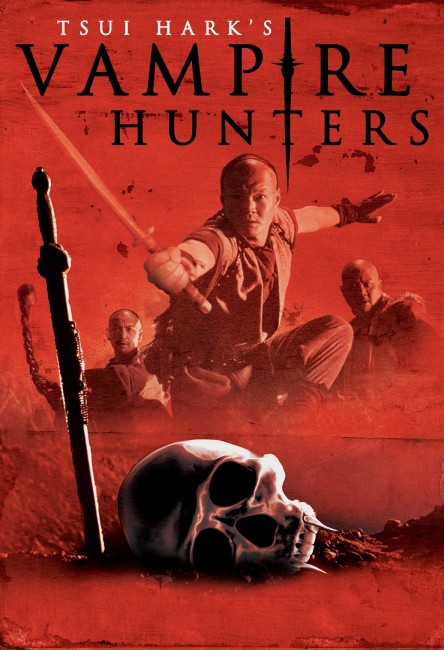 aka Era of Vampire

A group of monks pursue zombies and vampires. They follow the trail to the house of Jang where they are mistakenly taken on as workers during the wedding of Master Jang’s son’s to Sasa. On his wedding night, Master Jang’s son is bitten and killed by a snake. Sasa has really been sent by her brother Dragon to steal the gold hidden in the Jang house. Dragon uses a magician to call the preserved bodies of the Jang ancestors in the house back to life in order to create confusion so that he and his men can get in and steal the gold. At the same time, the heroes must deal with the king vampire who has risen in the forest.

Tsui Hark is one of the legends of Hong Kong cinema and Vampire Hunters was one of his films. At least, that is what the video releasing company wants to fool people into believing. To be fair, Tsui Hark wrote and produced the film and is substantially involved creatively but the real directing chores were handled by Wellson Chin. However, on the dvd cover, Wellson Chin’s name has been hidden amidst the credits and Tsui Hark’s boldly emphasised in order to fool anybody who fails to look too closely. Wellson Chin is a director previously known mostly for energetic Hong Kong slapstick films.

Vampire Hunters is a return to the Wu Xia genre that Tsui Hark has been strongly identified with – his Zu: Warriors from the Magic Mountain (1983) is often credited with creating the fantastical martial arts/flying swordsman genre and he has directed other occasional efforts in the genre such as Green Snake (1993), Zu Warriors/The Legend of Zu (2001) and Detective Dee and the Mystery of the Phantom Flame (2010), not to mention produced classics such as A Chinese Ghost Story (1987), Swordsman (1990) and sequels to either. These days Tsui tends to work more as a producer than he does as a director.

Vampire Hunters is disappointing. Maybe it is that Tsui Hark seems to be slowing down in his output, maybe it is that he has employed a comedy director to helm the film – it’s not quite clear. There is a promisingly demented opening involving zombies flying through the air dragging soldiers behind them as they try to corral it with chains, and victims having their blood and lifeforce sucked out through their eyeballs. However, the film only periodically opens out into the kind of visual lunacy and acrobatics expected of the genre – when it does, it fails to seem that inspired, even less when it tries to slow down for some silly and girlish (but at least mercifully brief) romantic scenes. Moreover, Tsui Hark delivers an incoherent screenplay where it is not always clear why the various parties are trying to do what they are doing.

The film has certainly been designed with some lavish costumes and sets. Interestingly, Wellson Chin has chosen to eschew the bright pastel colours of Wu Xia films in favour of earth colours. His teams of heroes and villains are not heroically stylised but come with the seams left on – they are pudgy, unshaven and don’t necessarily have handsome faces. The film builds to a moderately entertaining climax featuring the heroes trying to attack the giant king vampire with chains and explosives while it breathes fire. The film itself is a disappointment.