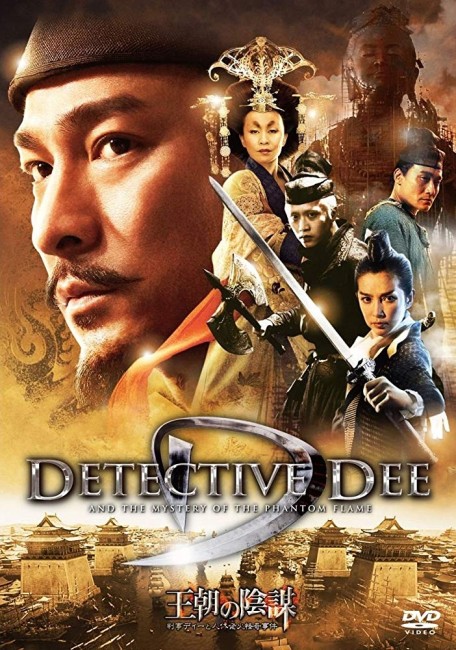 China, 689 A.D. Wu Zeitan is about to undergo coronation as the first empress of China, although there is opposition to this and rebellion is being plotting among rival princes who seek to take the throne. A 66-yard tall statue of the Buddha has been built for the coronation. During inspection, the architect suddenly bursts into flame. As the foreman races to tell the Empress, he also bursts into flame. It is decided that the only one who can solve the mystery of this Phantom Flame is Detective Dee who has been jailed for opposing the empress. Detective Dee is freed and given licence to investigate, although the empress sends her handmaiden Shangguan Jing’er to keeps close tabs on him. Detective Dee’s investigation takes him in search of the rare fire turtles and deep into the heart of the plots against the Empress from rival princes and those within her own government.

Tsui Hark was one of the key figures in the Hong Kong fantasy boom of the 1980s and 90s. Tsui is often credited with creating the Wu Xia cycle with his hit Zu: Warriors from the Magic Mountain (1983). This is not accurate – there were earlier progenitors among the numerous Shaw Brothers films – however, Zu was influential and Tsui Hark went onto produce some of the most significant films of the cycle, notably A Chinese Ghost Story (1987), Swordsman (1990) and sequels to either, several of John Woo’s early Hong Kong action films, as well as directing the influential non-genre Once Upon a Time in China (1991). (A full list of Tsui Hark’s genre films as director and producer is at the bottom of the page).

The handover of Hong Kong to China seemed to spell an end to the boom that Hong Kong fantasy cinema enjoyed throughout the 1990s. Many of the key directors – John Woo, Ringo Lam, Ronnie Yu – departed for US shores. Tsui Hark ventured there briefly, making two Jean-Claude Van Damme vehicles with Double Team (1997) and Knock Off (1998), both of which are regarded among Tsui’s worst films. The US clearly did not agree with Tsui and he returned home. Come the 00s and Wu Xia suddenly found itself reinvented with worldwide acclaim in Ang Lee’s Chinese financed Crouching Tiger, Hidden Dragon (2000). China leapt upon the success of this and bank-rolled several lush period fantasies from Zhang Yimou with Hero (2002), House of Flying Daggers (2004) and the non-genre Curse of the Golden Flower (2006), as well as efforts from other directors such as The Banquet/Legend of the Black Scorpion (2006) and The Grandmaster (2013). John Woo was even persuaded to return to China to make the epic historical drama Red Cliff (2008) and Red Cliff Part II (2009). Tsui Hark found the same reinvigoration to his career with the Chinese-backed Detective Dee and the Mystery of the Phantom Flame, which was the biggest success he had enjoyed since sometime in the 1990s, followed by Flying Swords of Dragon Gate (2011).

Detective Dee, or to give him his Chinese name Di Renjie, was a true historical figure, having lived from 630-700 A.D. Di Renjie was a judge in the provincial courts where he was known for the fairness and indisputable logic of his judgements. From the late 680s to the early 690s, Di Renjie rose through the ranks of the court of the Dowager Empress Wu Zeitan, eventually becoming her chancellor. Chinese history is divided on whether Wu Zeitan was benevolent or utterly ruthless in her ambition but the film is generally accurate to the historical record in its depiction of her reign as China’s first and only female emperor and Di Renjie’s rise to advisor where he quashed several rebellions that sought to unseat her for the hubris in assuming that a woman could run the country.

All of that said, the character of Detective Dee or Judge Dee exists more in fiction than he does in history. Detective Dee first appeared in Di Gong An, a Chinese detective novel written sometime in the 18th Century. This book was discovered by Robert van Gulik, a linguist with the Dutch mission in China during World War II, who published a translated version The Celebrated Cases of Judge Dee (1949). Van Gulik then hit upon the idea of writing his own Judge Dee stories, adapting the character and Chinese storytelling form to the Western convention of the detective story. He published sixteen Judge Dee books and story collections between 1950 and 1968. It is in these that the character of Judge Dee takes on his reputation as a fair-minded rationalist extraordinaire with an ability to parse through problems to see the essence at the core. These were adapted into a six-episode tv series Judge Dee (1969) from UK’s Granada Television starring Michael Goodliffe as Judge Dee and a US tv movie Judge Dee and the Monastery Murders (1974) starring Khigh Dheigh. There was also a Chinese-made film in 1986, as well as a 2009 Hong Kong tv series that was set around the dynastic complications of the era.

The one thing that the Chinese backing has afforded Tsui Hark is one of the largest budgets he has had in some time – possibly ever. This is immediately evident from the opening scenes where he takes full advantage of the visual effects houses to show a highly detailed vision of the Imperial capital in the background with a 66 yard tall Buddha statue stretching up over it with armies of workers toiling away in the interior. As with Zhang Yimou’s films, there has been an extraordinary lavishness outlaid on the production design and costuming.

Tsui Hark also jumps in with his expected wildly fantastical Wu Xia acrobatics. The first action sequence in the jail, involving Andy Lau and his companion, both of them blindfolded, tackling soldiers as they bounce around chains and burning carts is a fine showing of Tsui Hark on classic form. There is a delicious sequence with Li Bingbing attempting to seduce Andy Lau (on the Empress’s orders), which segues into a scene with them ducking and spinning around the floor trying to avoid a volley of arrow that come piercing the walls. There are amazing sequences, like the one where the character with the eyebrow-raising name of Wang the Donkey makes an escape through an underground stream in a small boat, which is then spun up into the air by an eruption of giant logs from beneath the water and above, followed by fight scenes while ducking around the logs, before the utterly bizarre moment where they are forced to battle what looks like goblins with buzzsaw attachments before these are revealed to be puppets being manipulated by masked figures high above in the caverns. There is also a bizarre sequence where Andy Lau is forced to fight a series of attacking elk, flipping through the air and pitting his sword up against their antlers.

On the other hand, I ended up wondering if Tsui Hark and Detective Dee were not a mismatch at times. Detective Dee is a rationalist detective who always makes a beeline for the logic in a situation – although there are ghosts that turn up in the original Chinese stories, the stories themselves are not fantastical in nature. On the other hand, Tsui Hark is a director who keeps wanting to push the material towards the inherently fantastical, even though he is making a murder mystery that any other director could easily have given an entirely mundane handling – the only real fantastical elements in the script are the fire turtles and a form of acupuncture that allows the user to place pins into their heads that twist the face into a disguise (even the martial arts moves are not as constantly physics defying as Crouching Tiger and other Wu Xia). In fact, what Detective Dee reminds of is Pitof’s Vidocq (2001), which was nominally based on a true-life 19th Century detective but turned his adventures into a wild dark fantasy. The other complaint that one would make is that under Tsui Hark there is more of an emphasis on Wu Xia sequences and the luxuriousness of the production design than there necessarily is the detective story. Certainly, what we have is a Judge/Detective Dee that Robert van Gulik would have difficult recognising.

(Nominee for Best Cinematography and Best Production Design at this site’s Best of 2010 Awards).