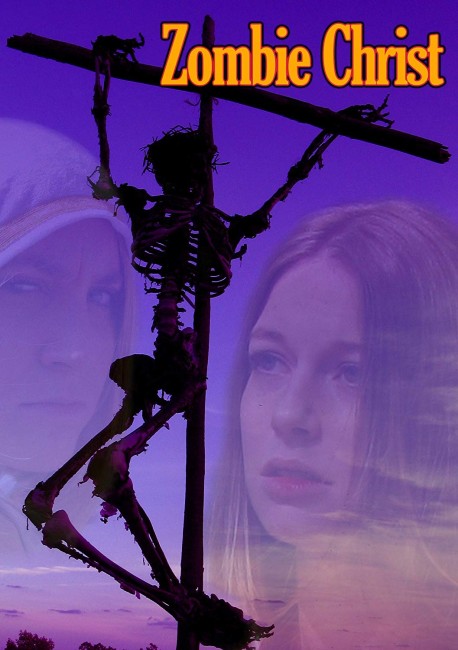 Druids conduct a ritual that raises the zombified skeleton of Jesus Christ from the dead. The zombie Jesus travels about trying to regain his fleshly form by having sex and devouring the souls of women. Michael appears to Mary, begging her to listen to him, as he tells her the real story of Jesus and revealing that she is a direct descendent of Mary Magdalene. He endeavours to protect her as the zombie Christ comes after her

Zombiechrist was my introduction to the cinema of Bill Zebub. The first thought is that you are watching an amateur film made on a budget that would regard being called a shoestring as a luxury. The second thing that captures your attention is that the first ten minutes or so are occupied by naked women – the credits take place over a montage of nude women cavorting in the woods while Zebub himself plays a druid enacting a ritual. This goes on for seven minutes and is then followed by another five minute scenes as Eidolona comes home, strips off to take a shower and then, while naked, confronts the zombie Jesus as it devours her soul.

What we have is a film that is clearly made by metal fans – plentiful bands play on the soundtrack and the end credits list a long line of thank yous to various bands – if you didn’t know anything about Bill Zebub’s background. It is a film hoping to get by on outrage value alone. There is no discernible plot to anything that happens, just a random series of scenes where the Zombie Christ (a near immobile puppet) attacks and is said to devour various women (always in a state of undress). The acting by all involved (all non-professionals) is fairly terrible.

One of the recurrent themes of Bill Zebub’s films and fanzine is apparently his attacks on Christianity and organised religion. If the title itself didn’t get believers worked up, he throws in a variety of scenes guaranteed to outrage, including a scenes with the Zombie Christ violating a nun (Jordana Leigh) with what looks like a chicken drumstick and another where the Zombie Christ gives a paedophile priest a blowjob and bites his dick off in a highly unconvincing gore effect. Peculiarly, there are also a series of scenes interspersed throughout, usually between Martin Grinmsley and Jessica Alexandra Green, where Zebub seems to be seriously arguing for an alternate non-religious interpretation of the Gospels.