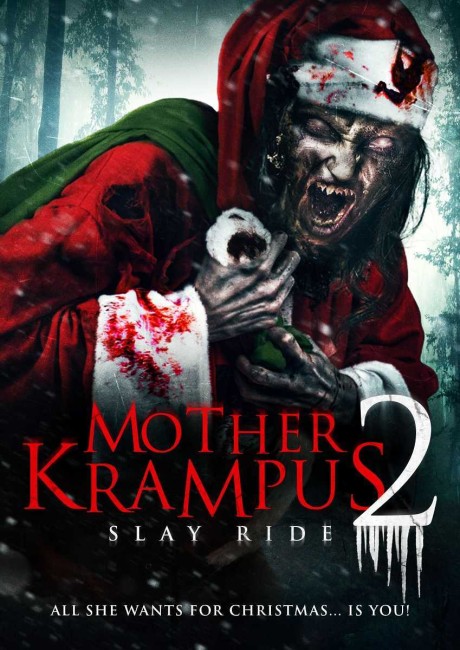 It is nearing Christmas. Four girls are on the last day of their court-mandated community service, including the stripper Candace, her friend Gracie who has been caught for shoplifting, the teenager Victoria and the drag queen Athena. They are first sent to help out at a homeless shelter but manage to sneak off to a bar, while Gracie hooks up with her drug-dealer boyfriend. They are then sent to sing carols and offer aid to the elderly. They stop at one house and are invited in to help the aging Theodora. However, there is a masked figure in the house who begins killing them.

There are plentiful Christmas themed films that come out each season usually made for tv. These are so banal the site does not make any effort to keep up with them anymore. There is also a bunch of Christmas horror films, The Christmas slasher film has almost grown to become its own genre niche with the likes of Black Christmas/Silent Night, Evil Night (1974), Silent Night, Deadly Night (1984) and sequels, To All a Good Night (1980), Christmas Evil/You Better Watch Out (1980), Silent Night (2012), All Through the House (2015) and Good Tidings (2016). There have been other Christmas horror films too ranging from Santa Claus vs. the Zombies (2010) to the Finnish-made Rare Exports (2010) with its rampaging Santa Claus monster. (For more detail see Christmas Films).

In 2015 after the theatrically released Krampus (2015), Hollywood suddenly discovered Krampus – the legend that originates from Germanic regions of an anti-Santa who punishes the naughty on Christmas Eve. This was followed by a spate of low-budget Krampus films – Krampus: The Reckoning (2015), Krampus Unleashed (2016), Krampus: The Devil Returns (2016) and one of the stories in the anthology A Christmas Horror Story (2015).

I must admit that my attention was caught by the title but the reality is that Lady Krampus is a fake Krampus films. No Krampus or female equivalent thereof appears throughout. In fact, this did not even start out as a Krampus film but a Christmas horror entitled Naughty List that was shot in 2016. The distributor had also picked up a British-made Christmas horror 12 Deaths of Christmas (2017) and retitled it as Mother Krampus to exploit the Krampus movie fad. Naughty List was sold as a bogus sequel even though it is not in any way related, before being retitled Lady Krampus.

Lady Krampus is not a very good example of a Christmas horror film. There’s a basic semi-competence to the photography but the audio quality is poor and varies wildly in quality from scene to scene (evidence of a low budget and no money for ADR). Director Eddie Lengyel gets off an okay opening with three people slaughtered by a masked figure in a house. The film then switches its attention to the quartet of people on community service. We follow the four through being assigned to work at a homeless shelter, their sneaking off to a nearby bar, Robbie Barnes going off for some nooky with drug dealer boyfriend George Tutie and then the other three going Christmas carol-singing and being invited into the home of elderly Kris Smith (one of the co-writers of the film).

It gets to be an hour of screen time between the first set of killings and when we get to see anything else. For a horror film, you better have something fairly interesting happening in that time to hold an audience’s attention and needless to say Lady Krampus does not. The dramas and the pace of scenes drag like molasses. The one positive part of these scenes is the frequently funny, scene-stealing performance from Roger Conners (another of the film’s co-writers) as the drag queen Athena. The film finally emerges as a passable slasher in the last fifteen minutes.