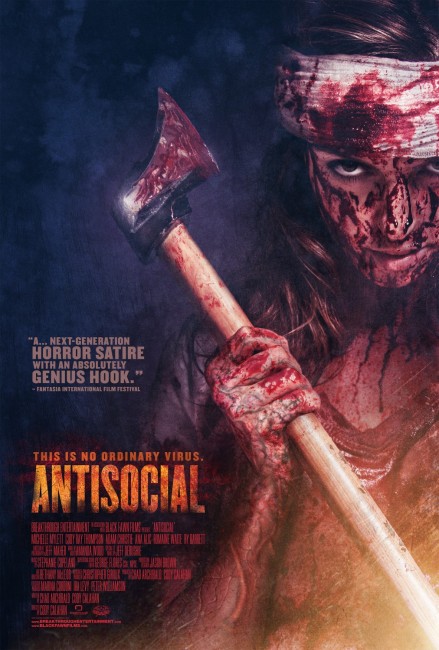 On New Year’s Eve, Samantha Rezner breaks up with her boyfriend Dan Hamilton via the social network site Socialredroom. She goes to a New Year’s Eve party being held by a group of friends. As she arrives, there comes news on tv and the internet that people are going crazy and attacking others. Authorities warn everybody to barricade themselves indoors. As the group do so, people try to break into the house. Steve begins to experience hallucinations and then bleeds from his ear and nose, the sign of infection. As the infection spreads to others among the group, they realise that it being triggered across social media due to a subliminal message created by Socialredroom that has gone amok and caused the brains of users to expand.

Antisocial reminds a good deal of The Lawnmower Man (1992), which came at the very arrival of the internet and with wildly exaggerated overreaction saw that all that it promised was science run rampant and the creation of monsters. Before that you could point to films like Alraune (1928) and its greeting the idea of artificial insemination, or almost any mad scientist film on the topic of medical advancements. These are films that see a coming societal sea change but only believe that it will bring disaster and social apocalypse.

There was also the Sandra Bullock thriller The Net (1995) that saw that the internet meant a nightmare of identity theft/erasure. A few years ago we had Chain Letter (2010), a slasher film that this has some resemblances to, which similarly greeted the coming interconnectivity revolution with the alarmism of a conspiracy theorist.

The one work that Antisocial comes the closest to is the Stephen King novel Cell (2006), subsequently filmed as Cell (2016), which had a zombie apocalypse being spread via cellphones. It is not clear if any of these actually believe these things are going to happen but what they do is exploit topical fears about technological advances and play for the most alarmist aspects. In actuality, they seem exactly like an old timer griping “I don’t like all these newfangled things. Why can’t things be the way they were when I was a young’un? Nothing good’ll every come of it.”

Antisocial wants to make some big message about social media. Everywhere the characters seem to spend their time logging onto social networking sites, commenting about their lives, postings pictures and videos of what they are doing, engaged in video chats and text messaging, search for content on video sharing sites, make video blogs, conduct relationship break-ups via social media, get their news online, even make their own sex tapes.

We get the message loud and clearly that yes okay everybody today spends too much time on social media. The film has no real message to make other than that, except perhaps to warn us that that it makes us vulnerable to whatever advertising messages that social media sites want to instil in our brains. You would have thought that with the revelations of Edward Snowden and secret NSA spying on personal data in the last few months before this came out that maybe Antisocial had missed the boat slightly when this is all it can come up with.

I must admit that I had difficulty computing the film’s capsule concept of “a zombie apocalypse spread by social media” but it should be said that the film does give us a semi-credible science-fiction explanation of how this might work where it has borrowed more than an idea or two from the explanations offered in David Cronenberg’s Videodrome (1983).

Unfortunately, beyond making an intriguingly topical message film, Antisocial remains a distinctly ordinary zombie film. The actual zombie apocalypse that takes place is very minimal and for the most part occurs off-stage – ie. seen only on news clips or the odd person trying to break into the house where the party is taking place. Most of the rest of it is about the group contained in the place and either getting infected or thinking that others of the group are infected. Some effects like the hallucinatory images of groups of people with speed rotator heads has become a big cliche effect in horror, while the film’s final images seem to be drawn from just about every Resident Evil film.

Cody Calahan does give us a couple of good effects-driven scenes that show he has promise as a horror director. One of these is where a hallucinating Aria Alic pulls a long thread of something organic out of her mouth that proves to be more than two feet long, which she then starts trying to cut out with a pair of scissors. Another is the scene where Alic becomes infected while bound with Christmas tree lights and crawls down the corridor after Michelle Mylett all lit up in flashes of light, before falling over the banisters and hanging herself.

I am tempted to include the climactic scene where Michelle Mylett gets an infected Cody Thompson to trepan her forehead with a power drill and then does the job herself after he succumbs to infection. However, the whole way through the scene, I was being distracted by the absurd improbability of it – thinking “okay, so she’s trusting someone who is experiencing hallucinations that will cause him to become psychotic at any moment to jam a power drill into her forehead and not slip or go too deep – oh and to use an unanaethetised drill as well.”

Similarly, the eeriness of the scene where the group discover that dead people’s eyes transmit live video feeds on social media is undercut by what an absurd idea it seems when you think about it for ten seconds. These set-pieces perk the film up but frankly it needed more of them. Its sense of apocalyptic siege is anaemic, leaving it with only a few effects scenes to deliver the horror movie goods.

Cody Calahan and Michelle Mylett returned with a sequel Antisocial 2 (2015). Callahan subsequently went on to the evil twin film Let Her Out (2016).