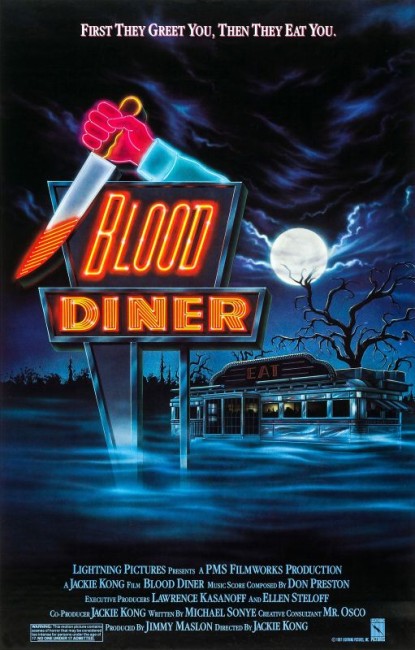 Michael and George Namtut dig up their uncle Anwar’s brain . Under his instruction, they build a body from parts of girls they dismember to house an incarnation of the two million year-old goddess Sheetar. The leftover body parts are meanwhile served up as vegetarian delicacies at the diner the two brothers run.

This low budgeter from woman director (a unique rarity for the splatter film genre, as far as one is aware) Jackie Kong, is a delight. It is a film that delights in its own stupidity. In this respect, Kong’s outrageous inventiveness and lack of pretension makes it a far more perversely enjoyable film than many big budget studio counterparts do. This is the sort of film that Troma kept seeming to want to make but perpetually lack the ability to do.

The blissful stew of elements seems to be thrown together as though to see how many gonzo exploitation ingredients can be combined at once – topless aerobics massacres; wrestlemania with Carl Crew thrown in the ring against a goose-stomping Adolf Hitler lookalike; and a marvellous climax that mingles green disco dancing zombies clambering for a potful of human limbs, a goddess with a toothed vagina in her stomach blasting lightning bolts. The film is scored with both classical music and parodied punk.

The gore is hilariously absurd – when a guard is whacked over the head his eyeballs go flying out; there is a scene where the entire diner is sprayed in vomit; another with the diner owner trying to drive with his hands severed at the wrist. However, the funniest of all is one scene where Rick Burks, promising kinky thrills, coats a bimbo in batter and then shoves her head into a deep fry vat, which she emerges from her head a beehive of fried batter that Burks proceeds to swat across the other side of the room with a large stick. The idea of an Egyptian goddess being worshipped two-million years ago is just one of the film’s deliberate non-sequitirs.

Jackie Kong had originally made the B-budget mutant splatter film The Being (1983). Blood Diner is her best film. She had only directed two other films with the non-genre comedies Night Patrol (1984) and The Underachievers (1987).