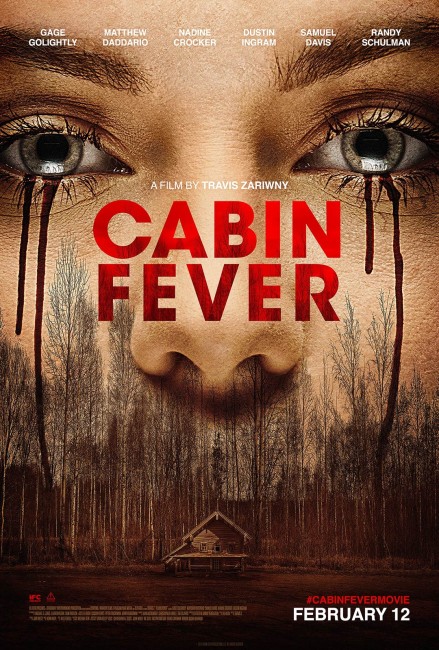 A group of five friends head up to a lakeside cabin for a weekend of partying. Bert has brought a semi-automatic rifle and fools around in the woods, only to accidentally shoot a man. The man later turns up at the door of the cabin, copiously bleeding, before they drive him away. However, the man has a deadly infection and this has contaminated the water. As they drink the water unawares, they too become infected and begin to bleed out all over their bodies.

Eli Roth’s Cabin Fever (2002) was a modest hit. The balance of gore and sarcastic humour obviously struck a nerve for audiences and the film became a reasonable success in theatrical release and subsequently on video and dvd. It launched Eli Roth’s career as a horror director. There were two negligible sequels with Cabin Fever 2: Spring Fever (2009), one of the early films of Ti West, and Cabin Fever: Patient Zero (2014).

For no apparent reason, we now get a remake of Cabin Fever. Why, could be anybody’s guess – other than that Eli Roth and co-writer Randy Pearlstein probably took advantage of some producer’s offer to recycle their script for a whole bunch of money. It has only been fourteen years since the first film came out – it is usually at least 2-3 decades before we start to see remakes (not counting English-language remakes of foreign films) and people feel confident that the original has been around in tv re-runs long enough that a new generation of 19-25-year-olds are going to appreciate seeing it recast with new faces.

While Eli Roth and Randy Pearlstein have simply recycled their screenplay for the original, a number of changes have come in. Perhaps the most noticeable of these is the film is no longer a horror comedy and all the genre in-jokes have been cut. Either director Travis Z is unattuned to these elements, lacks a horror background or orders have come down from above. Or quite possibly it was that Eli Roth improvised most of these in the original.

Whatever the case, the sarcastic horror comedy element that was essentially the making of the original Cabin Fever is gone and without it we now only have a standard cabin in the woods film. What this results in is a Cabin Fever where the students are earnestly cool hipsters, obsessed with beer and making out, while bland pop songs play on the soundtrack.

One of the worst changes is Dustin Ingram’s Bert who is now made into a major idiot who has brought along a semi-automatic rifle as opposed to a single-action gun and is obsessed with randomly blasting everything he comes across up with entire clips of ammo. Another of the worst aspects is the recasting of Giuseppe Andrews’ Deputy Winston with a woman in the role. Andrews’ hilarious performance was one of the best aspects of the original, whereas Louise Linton  adds nothing – in fact, her leering innuendo when we first meet her makes for something that is positively awful. .(Shortly after the film came out, the Scottish-born Linton married studio executive Steve Mnuchin who went on to become Donald Trump’s Treasury Secretary)

If Cabin Fever 2016 were made on its own terms, one supposes it would not have been too bad. Travis Z does a passable job directing, while some aspects like the photography are reasonable. The remake seems to have been made on a much better budget and there are certainly some good makeup effects representing the meltdowns. Once these kick in in the latter half, the film does attain a certain grimness. It is just that comparison to the original casts a huge shadow of disappointment over the exercise.

Director Travis Z (or Travis Zariwny) first made the modest science-fiction film Scavengers/Super Soldiers (2013) and before that has a number of credits as a production designer. Subsequent to this, Z/Zariwny has directed a number of other low-budget horror films with Intruder (2016) and The Midnight Man (2016), as well as one of the segments of the anthology World of Death (2016).