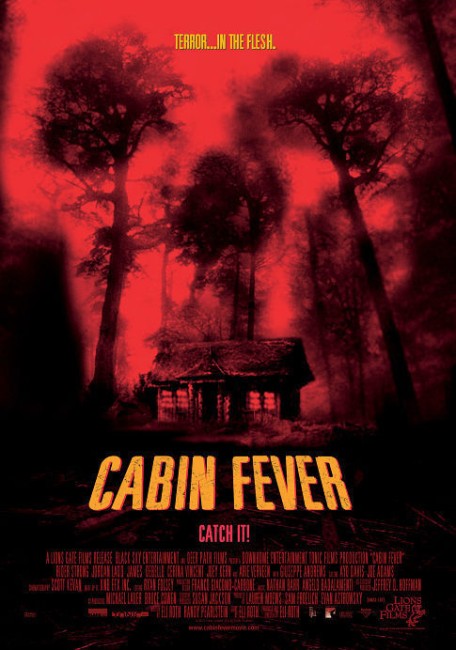 Five college friends go up to a remote North Carolina cabin for the weekend. That night a strange man approaches the cabin, vomiting blood everywhere, and they have to drive him off with guns and sticks, not before he wrecks their jeep. Believing they may have killed the man, they try to find a way to get their vehicle repaired and leave. However, the man was infected with a contagious, skin-eating disease and his body has fallen into the nearby lake. In drinking the contaminated water from the lake, the members of the group become infected with the same disease. As the group becomes paranoid about avoiding infection, they must also deal with the hostility of the redneck locals.

Cabin Fever emerged out of nowhere as the supposedly new full on, no-holds-barred horror hit of 2002. Certainly, a good deal of this was director Eli Roth’s own hyperbole and self-promotion – one is always leery of a film (or anything) that tries to proclaim itself as the new cult masterpiece. That said, Cabin Fever proved to be a sensation upon its premiere at the Toronto Film Festival, where a bidding war for distribution rights resulted, with Lions Gate reputedly paying the highest sum they ever had to acquire the film. Cabin Fever subsequently became a worldwide festival hit, found enthusiastic acclaim with genre fans and earned Eli Roth a ticket as a hot new director to watch out for.

Cabin Fever should be welcomed for turning back the tide of bland, post-Scream (1996) teen horror films that dominated the early 00s. Unlike most of these, Eli Roth is not afraid of getting down and bloody. The teens are chosen not for good looks and one-dimensional characterizations but are refreshingly portrayed as being sarcastic and self-absorbed. Roth delivers the satisfying goods on most counts as a horror film – he happily gets back to 1980s basics, gets his actresses topless and does not water the gore down to a PG-rated level. With the help of Hollywood effects house KNB EFX Group, he delivers up a number of blood-glistening shock images – Jordan Ladd with her face rotted to the teeth, vicious dog attacks, various bodily meltdowns and two well directed scenes – one where Rider Strong finally gets to make it with Jordan Ladd only for his fingers probing Down Below to reveal a shock mass of blood and gore, and a nifty sequence where Cerina Vincent shaves her legs in the bath and unwittingly starts gashing her sores open.

On the other hand, while Eli Roth makes a determination to get back to horror basics, Cabin Fever also holds many disappointing allegiances to the new teen horror film – it is very much a postmodern horror film where its moves are constantly being seen in regard to other horror films. While Cabin Fever never rabidly pastiches, quotes and deconstructs horror conventions and clichés with the mind-boggling veracity that Kevin Williamson does in Scream, Eli Roth shows he is at least in the same camping ground as Williamson in wanting to tip his debts of inspiration as a filmmaker. The premise of the group of five going up to the remote cabin in the woods directly quotes from The Evil Dead (1981) (something confirmed by Eli Roth’s reference to a Shemp and a Fake Shemp among the credits, a regular joke credit that appears in several Sam Raimi films). The redneck locals could have been lifted from any 1970s survivalist horror film – Deliverance (1972), The Texas Chain Saw Massacre (1974) – while Joey Kern’s surviving the long night of terror only to run afoul of the sheriff’s department directly quotes Night of the Living Dead (1968).

Unlike Scream, Cabin Fever feels less like Eli Roth is deconstructing the films of his youth than he is stirring a body of familiar clichés and sources in one big pot. Case in point being the post-credits coda with the virus being unwittingly distributed everywhere, which feels less like a sinisterly nasty just-when-you-thought-the-threat-was-over twist than it does a quoting of another almost-familiar cliché. The plague is also a vague threat – it lacks the same palpable personality or threat as does say the backwoods demons in The Evil Dead, the maniacs in various slasher films or the psychotic hillbillies of Deliverance.

Eli Roth would like us to believe that Cabin Fever is (in his own words) a “no-holds-barred, totally twisted, totally fucked-up” horror film. Maybe. Cabin Fever is not unenjoyable but then it is not truly groundbreaking either. Roth sees himself in a class with people like Tobe Hooper making Texas Chain Saw, Sam Raimi with The Evil Dead, Stuart Gordon with Re-Animator (1985) and Peter Jackson with his early splatter films – Bad Taste (1988), Meet the Feebles (1990) and Braindead/Deadalive (1992). Indeed, Roth’s self-confession is that his great ambition in life was to be able to get on the cover of Fangoria magazine. For all that, Cabin Fever feels like a return to a certain type of 80s horror film that has been resurrected (albeit watered down) in recent years but nothing truly groundbreaking. Unlike most of the abovementioned gems, Cabin Fever looks well budgeted (although apparently had only a $1 million budget) and professionally made and cast. What is missing however is the sense of no-holds-barred guerrilla wildness that made Night of the Living Dead, Texas Chain Saw, The Evil Dead, Re-Animator et al outlaw classics for their sheer ferocity. Where they went all-out, Eli Roth seems happy to merely quote other films – and all that that ultimately makes him is another Kevin Williamson with a little more gore and nudity.

Eli Roth’s forte may be less any ability with groundbreaking horror than it is simply a wryly sarcastic sense of humour. What he does achieve particularly well is to turn the usual complement of slasher/horror victims into surprisingly well-rounded characters who display entirely credible reactions to the situation. Particularly standout here is James DeBello’s fine performance as a horny, beer-swilling frat jock whose sarcasm and perfect delivery carries the brunt of the film’s humour. Even better is Roth’s ability to pack the edges of the film with eccentrically offbeat characterisations – the psychotic hog lady, Robert Harris’s redneck convenience store owner, Matthew Helms as the psychotic ‘Don’t Touch Dennis’ (the story Roth tells about the real-life Helms is even funnier) and especially Giuseppe Andrews as the laidback, party-loving Deputy Winston who proves to be the scene-stealer of the film.