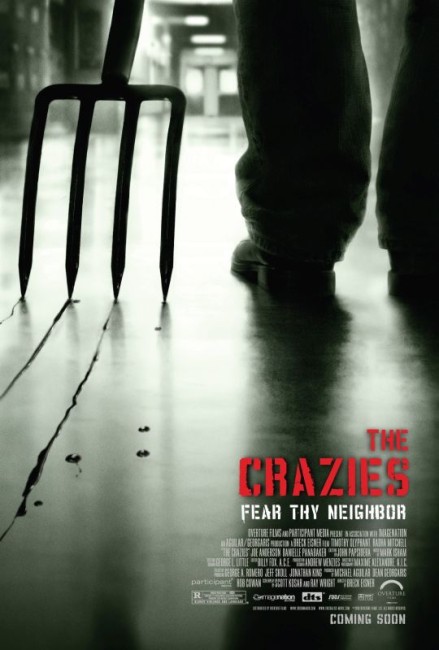 In the small Iowa farming town of Odgen Nash, farmer Rory Hamill walks onto the field during a school baseball game carrying a shotgun. Sheriff David Dutten is forced to shoot Hamill when he will not put the gun down. David’s wife Judy, the town doctor, treats Bill Farnum who is brought in by his wife acting strangely but is unable to find anything wrong with him. That night, Bill sets the house on fire with his wife and son locked in the closet. Investigating, David and his deputy Russell Clank discover that a plane has crashed in the area. They believe it has spilled a toxin into the town water supply and that this is affecting people’s behaviour. A military cordon is abruptly erected around the town and everybody rounded up by soldiers in contamination suits. Because she is pregnant and has a higher temperature, Judy is mistakenly placed among the infected. When other crazies ram through the fence to break out, David takes the opportunity to return and rescue Judy. He, Judy, Russell and others attempt to make it across town to safety but this has become a war zone inhabited by infected crazies and soldiers who are shooting anyone still remaining. At the same time, the group cannot be sure whether or not they too are being affected by the madness.

The Crazies (1973) is one of the more overlooked films in the oeuvre of George Romero. It was Romero’s fourth film and clearly a point where he was being given a reasonable amount of money in an attempt to replicate the success of Night of the Living Dead (1968). Unfortunately for Romero, The Crazies was not a box-office success. It has a mixed regard among genre reviewers, although this reviewer joins a number of voices in begging its consideration as one of the most underrated of Romero’s films. The central idea is a good one and Romero creates a number of effective and disturbing images of the township slowly going crazy and the party being rent from within by madness as they try to escape. The film finishes with Romero attempting to emulate the bleak ending of Night of the Living Dead and create another of the metaphors of the social apocalypse that run through his films of this period.

Here The Crazies undergoes the inevitable remake, as almost every film you care to name from the 1970s and 80s has over the last few years. Among the spate of remakes, Romero’s works have been popular and we have seen updatings of Dawn of the Dead (2004), Day of the Dead (2008) and an announced remake of Creepshow (1982), as well as numerous homages and spinoffs. The remake of The Crazies has been announced as far back as 2005 when the remake fad was just getting started. More to the point, it has a script from Scott Kosar who wrote the remake of The Texas Chainsaw Massacre (2003), which started this 70s/80s horror revival fad off, along with the new versions of The Amityville Horror (2005) and The Haunting of Hill House (2018) and the original screenplay for The Machinist (2004).

The Crazies remake comes from Breck Eisner. Eisner has the unusual distinction of having been associated with a number of big-name projects over the last few years – The Crazies, as well as big-budget remakes of Flash Gordon (1936), The Creature from the Black Lagoon (1954), The Brood (1979) and Escape from New York (1981) – despite having only made two other films, neither of which set the world alight. Eisner had previously made one of the episodes of the alien visitors tv mini-series Taken (2002) but his first film was the little-seen science-fiction film Thoughtcrimes (2003) and he subsequently went onto make the Matthew McConaughey action vehicle Sahara (2005), which was a box-office flop that only ever earned back well under a half of its $160 million budget. It is a surprise when a director can attract such big name projects despite a largely unproven track record and his one chance at the big time being a flop. The prominence of Breck Eisner’s profile is probably due to the fact that he is the son of Michael Eisner, the former (much-hated) CEO of Disney and one of the Hollywood power elite through much of the 1990s and 00s.

The Crazies 2010 received some surprisingly good reviews upon opening, being called one of the few decent 70s/80s horror remakes of the 00s. What should also be said is that not many of the reviewers give the impression that they have seen the George Romero original – it is hard to make such a qualitative statement without comparing to the original. The Crazies 2010 is not a bad film but it is still lesser than the original.

George Romero’s The Crazies was a bleakly apocalyptic social metaphor in the mould of Night of the Living Dead; Breck Eisner and co have made it a modern work devoid of any sociological metaphors, excepting the standard cliches of sinister military heavies in vac suits etc. Romero’s modest sized original has been pumped up with big-budget action, top-drawer makeup and visual effects and so on. The bleak ending has been dumped in favour of something more ambiguously upbeat. There is now far more of an identifiable clearcut hero and heroine who you know will remain unaffected throughout – they even manage to outdo Indiana Jones and the Kingdom of the Crystal Skull (2008) and its much ridiculed nuke the fridge scene and walk away after being blasted through a nuclear explosion inside a semi-trailer cab.

Breck Eisner proves himself capable at handling the bustling busyness of big-budget movie-making – the copters flying overhead, military rounding the townspeople up, widescreen shots of the town in flames, the nuclear fireball at the end. You could easily imagine Eisner going onto a career directing material that Michael Bay, Renny Harlin or Stephen Sommers are too busy for – he certainly has less of a tendency to bombard us with effects sequences as these others do, which automatically makes him the better director.

Where Eisner seems less assured is as a horror director. The film is filled with intrusively forced attempts to make us jump – the family hiding in the closet and an eyeball appearing at the door accompanied by an amplified scream on the soundtrack; people reaching out to touch others from the corner of the frame; Timothy Olyphant and Joe Anderson looking into a jail cell as a dead body jumps up to attack; and the eminently predictable moment where Radha Mitchell is hiding in a meat locker of corpses and waiting until a crazy outside has gone, only to be grabbed from behind. There are several overly convenient scenes throughout with a crazy raising a weapon to kill one of the good guys only for them to be handily shot at the last second by someone we never saw enter the room.

In George Romero’s version of The Crazies, the emphasis was on the psychological effects of madness. Romero threw up disturbing images of the town turned upside down – the grandmother who sits in a rocking chair and then smilingly turns to stab one of her knitting needles into a soldier; the priest setting himself on fire; or the little girl watching as her mother is shot and then torched by soldiers. Here Breck Eisner’s emphasis tends to be less on the manifestations of madness and more on gory despatches – shootings in the head, people cut up with a surgical saw, pitchforked and so on. The images no longer have the same potency they did in the Romero version.

The crazies have now been made up to look more like they are zombies – indeed, the film often seems more akin to something like 28 Days Later (2002) than it does a madness outbreak film. Somehow the idea of seeing a townful of people go progressively crazier and not know what they are going to do seems infinitely scarier than zombies stumbling about. Part of this is that many of the images have been well used – although this is not entirely an excuse because The Signal conducted a much more effective variant on the madness outbreak a couple of years ago.

Partly it is also that the film chooses incredibly banal and unshocking images of people going crazy, never much more than wielding guns or setting houses on fire. There is nothing as effective or disturbing as the old lady with the knitting needle, the girl flirting with the soldiers as she is gunned down, the father trying to make moves on his daughter that we had in the original. We do see something of the party being subverted during their flight to freedom but here the screenwriters have chosen the most obvious character – the one who becomes progressively more gung-ho and trigger-happy. There is no genuine suspense to much of the film, just the playing out of gory payoffs.

The characters are relative blanks. They survive somewhat because Timothy Olyphant goes a good way towards imprinting the lead role with a handsome and heroic certainty. On the other hand, the film employs Australian actress Radha Mitchell who has been steadily gaining a reasonable international profile in recent years but only places her in a secondary role of little importance – the film makes her pregnant but then has the pregnancy being of almost no significance to the story. Other characters appear drawn from cliches – the sinister military are literally faceless, while John Aylward’s mayor who places commercial interests above the potential threats comes in the long line of horror movie mayors that stretch back to Murray Hamilton in Jaws (1975).

Breck Eisner next returned with the fantasy film The Last Witch Hunter (2015).