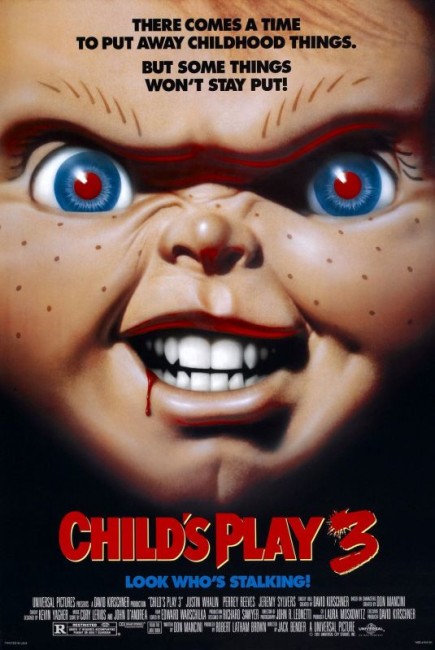 As the company that produces Good Guys Dolls announce that they are going to put the Good Guy Dolls back on the market, Chucky returns to life in a new body. Chucky promptly kills the CEO of the corporation and then looks up where Andy Barclay is now. Now a teenager, Andy is regarded as a troubled kid and is placed into the Kent Military School. As Andy tries to adjust to the tough new regime there, Chucky has himself mailed to the academy. The parcel is opened by young Tyler. Chucky realises that because he is in a new body, this gives him a new opportunity to incarnate in Tyler’s body. Andy tries to stop Chucky as he sets out to claim Tyler’s body, all the while massacring his way through the students and staff of the academy.

Child’s Play 3 was the third in the franchise of films that was started off by the popular Child’s Play (1988). That was followed by Child’s Play 2 (1990) and subsequent to this the series continued with Bride of Chucky (1998), Seed of Chucky (2004), Curse of Chucky (2013) and Cult of Chucky (2017). Child’s Play (2019) is a remake of the original. The common factor through all of these is writer Don Mancini, producer David Kirschner and Brad Dourif voicing the role of Chucky.

Amid the Chucky series, Child’s Play 3 is usually regarded as the worst of the series. The film was quickly made on the tail of Child’s Play 2 – indeed, went into production before Child’s Play 2 was even released in theatres. The film attained a certain notoriety in 1993 in that it was to have inspired two ten-year-old boys Robert Thompson and James Venables to murder two-year-old James Bulger in Merseyside, England. The film was claimed to be the last one sitting in the Venables home VCR and it was theorised by the moral kneejerk elements of society that this directly inspired the boys to replicate the crimes. (Later investigation showed that Venables’ father rented the film some months prior to the crime). This resulted in calls for the film’s banning, although these were not widely heeded. In 1996, the film’s ending up on tv schedules led to a call for its banning from no less than the floor of New Zealand Parliament.

Child’s Play 3 is an adequate run through of the basics of the franchise – neither truly terrible as some have it, nor anything memorable. While the subsequent Child’s Play entries ventured into outrageous black humour, this seems driven more by a mean-spirited sadism. There is a nasty scene at the start where Chucky stalks Good Guys CEO Peter Haskell through his office – strangling him with a yoyo, battering him with a gold club and then throwing darts at him as he tries to flee. There are various other scenes – the crushing of a garbage man in the compactor of his own truck; barber Andrew Robinson getting his throat slit with one of his own razors. The climax of the film takes place amid a carnival ghost train ride where Chucky manages to look especially evil with half of his face sliced off, revealing a gory mess inside.

One of the plus aspects of Child’s Play 3 is that it conducts an accurate-seeming depiction of the brutality of life at a military academy. One isn’t particularly sure why the series went to film at a military academy (an actual one in fact – the Kemper Military School in Missouri). The mindset of petty rule-keeping, authoritarian bullying and harsh discipline seems convincingly depicted. There are some fine little pieces of mise-en-scene here – the introduction of the bullying Travis Fine and his games of petty humiliation with recruits such as Dean Jacobsen and the novice Justin Whalin, the defiance on the parade ground from Perrey Reeves.

Amid the cast, the pretty-faced Justin Whalin stands in as the now teenage Alex Vincent from the two previous Child’s Play films. The only other recognisable name present is Andrew Robinson of Dirty Harry (1971) and Hellraiser (1987) fame, who has a silly role as the academy’s barber.

Jack Bender has directed a great deal of television between 1980 and the present, although not many theatrical films. His other occasional forays into genre material include the Halloween special The Midnight Hour (1985), the L. Frank Baum biopic The Dreamer of Oz (1990), the teen slasher Killing Mr Griffin (1997) and the time travel film Rewind (2013).