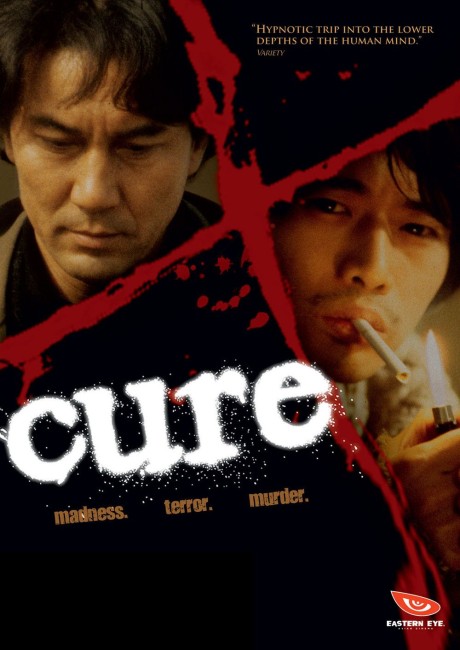 Police detective Takabe investigates a series of murders where people have suddenly and inexplicably killed others. An amnesiac man is found at one of the crime scenes. Gradually, Takabe comes to believe that the amnesiac Kunio Mamiya is capable of hypnotising people and making them kill. However, Takabe’s determination to break Mamiya causes him to have to delve into problems he has at home with his wife.

Receiving an arthouse release on Western shores, Cure was a sizable hit in Japan that brought to the forefront the career of Kiyoshi Kurosawa (who is no relation to Akira Kurosawa, as one is sure he is sick of telling the world by now). Kiyoshi Kurosawa had made earlier genre films such as the haunted house film Sweet Home (1989) and the psycho film Guard from the Underground (19921).

After Cure, Kurosawa went onto make a number of other genre films including Serpent’s Path (1997) and Eyes of the Spider (1998), a duo of studies in obsessive revenge; Charisma (1999), about an enigmatic tree; the medium thriller Seance (2000); the ghost story Pulse (2001); Bright Future (2003), a strangely unfathomable film about two frustrated workers and jellyfish amok; Doppelganger (2003) about an overworked man being helped out by a mysterious double; the ghost story/mummy film Loft (2005); the ghost story Retribution (2006); the dreamscape film Real (2013); the ghost story Daguerreotype (2016); and the alien invasion film Before We Vanish (2017) and its follow-ups the mini-series Yocho (Foreboding) (2017) and film Yocho (2017).

Cure starts in with a captivating grip. Kiyoshi Kurosawa directs the murders with an almost casual nonchalance, watching at an impersonal distance as a body goes flying out of a window, as a man casually jumps from a rooftop or a mild-mannered cop calmly shoots someone. There is no pumped-up drama or lurid violence to any of this as there would be in a Western film, the camera merely sits at a detached distance and coolly observes. With the enigmatic character of the amnesiac undergoing various interrogations and always swinging it around to hypnotise people with his cigarette lighter, everything builds a compulsively interesting mystery.

Alas, Kurosawa leaves us hanging at the climax. We are not given any idea what is going on at all, a problem that is endemic to every single Kiyoshi Kurosawa film. In the last quarter he introduces a piece of film from the 19th Century with hypnosis, the X mark and patterns of murders, which then infect the hero’s doctor friend. This raises more questions than it answers – Is Mamiya the person in the film? A ghost? Is he possessed? What are his powers and how did he come by them? Who is the person in the photo with the blank face? What is the meaning of the last scene where the seemingly infected Koji Yakusho may have killed his wife and seems to pass it onto a waitress in a restaurant who then picks up a knife as the film fades out? Baffling, frustrating.