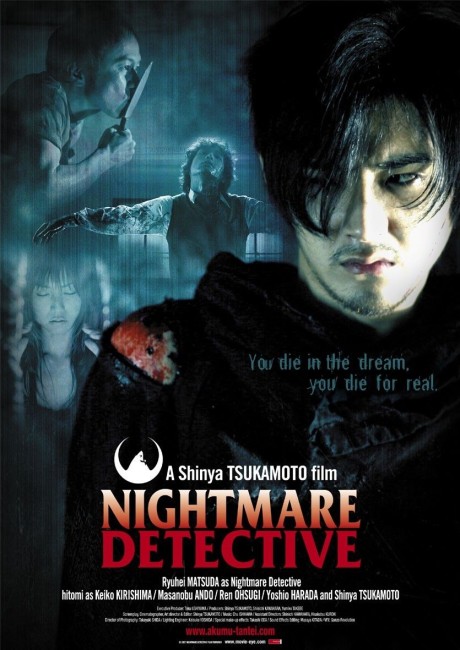 Keiko Kirishima, a detective with the Tokyo police force, has requested a frontline assignment away from her desk. The first case she has to investigate is a woman who has slashed herself repeatedly in her apartment in an apparent suicide. Keiko is not certain that this is what happened. Next, a man’s wife sees him slashing his own throat in his sleep in an identical manner. They begin to search for a common agency. Keiko is patronisingly placed in charge of investigating the supernatural angle of the case. Her search leads her to the reclusive Kagenuma who has the ability to enter people’s dreams. It is found that both the suicides called the same mystery person known only as 0 from their cellphones just before dying. Keiko’s colleague Wakamiya calls the number and Keiko is unable to prevent him from killing himself as he sleeps at the office that night. With Kagenuma refusing to help because he dislikes the things he sees inside people’s dreams, Keiko takes the step of calling 0 herself. Realising that she will be killed when she sleeps, Keiko tries to confront the individual known as 0 who gains pleasure from drawing the suicidal into his dreams and driving them to kill themselves.

Shinya Tsukamoto is one of the more unique and individualistic directors working in Japan today. Tsukamoto first appeared with Tetsuo – The Iron Man (1989) about a man whose body was being taken over by machinery, which had wild surrealistic disturbed edge that immediately captured attention. Tsukamoto subsequently went onto make two Tetsuo sequels and other works such as the demon-hunting film Hiruko the Goblin (1990); Tokyo Fist (1995) about boxing and masochism; Bullet Ballet (1998) about a man becomes obsessed with obtaining a gun; Gemini (1999) where a doctor’s upstanding life is invaded by a malevolent doppelganger; A Snake of June (2002) where a woman gains erotic liberation from a blackmailer; Vital (2004) wherein an amnesiac man begins to re-examine his life; Haze (2005) about a man trapped in an allegorical maze; and Kotoko (2011) about a woman suffering hallucinations.

The wildness that Shinya Tsukamoto displayed in his Tetsuo films and Tokyo Fist has quietened down this side of the 00s. Nightmare Detective was one of his more commercially successful films to date. It is clearly Tsukamoto relinquishing some of the disturbed obsessiveness of his earlier films and jumping on board the J-horror trends that became massive in Japanese and Asian cinema following the success of Ring (1998). Indeed, Nightmare Detective holds many semblances to Ring with its mysterious viral curses and especially to Tsukamoto’s good friend Takashi Miike’s One Missed Call (2003), which extended Ring‘s concept to cellular technology. You could maybe call Nightmare Detective a version of One Missed Call by way of A Nightmare on Elm Street (1984) and one of its sequels, along with more than a few dashes of Shion Sono’s Suicide Club (2002).

As with any Shinya Tsukamoto film, there are not always any easy footholds for every member of the audience to figure out what is happening. Take the opening conversation between Ryuhei Matsuda and a middle-aged man, which takes place in an average kitchen apartment but for a large length of hair hanging from the wall (shades of Ring and imitators) where it becomes apparent that they are in the midst of a dream as Matsuda convinces the man that the hair is representative of the daughter he aborted. This is followed by a scene where Matsuda wakes up out of the dream, only to find the middle-aged man has stayed inside and is dead with the relatives crowding in wanting to know if he left any instructions to deal with his will, whom Matsuda bizarrely sees as having faces that speed rotate and disappear into vortex holes. In the next scene, we see a girl talking on a phone to the man that we do not at this point recognize as 0 where she is then suddenly attacked and pursued back to her apartment by some unseen force. There is a genuine sense of bewilderment about what is happening.

There are all the wild and disturbed happenings of a Shinya Tsukamoto film – the image of a man who lies in bed with his wife, repeatedly slashing his own throat while he sleeps. The film becomes particularly good once we get inside Hitomi’s nightmare and are able to see just what seductive power the mysterious 0 (played by Shinya Tsukamoto himself) wields – the scene where the camera focuses in on her face in closeup as we hear his voice influencing her holds a considerable captivating pull. Once the nightmare begins, Tsukamoto takes us into a headspace and surrounds Hitomi with a paranoid dread. He is particularly aided by an unusual score that adds a great deal of atmosphere. There is also an excellent central performance from heroine Hitomi who enters with a coolly detached sophistication that sets up a decided ambiguity, while she does a fine job of acting scared once we get inside her nightmare scenario.

It soon becomes apparent that Nightmare Detective falls into the mini-genre of films about people with the ability to enter into dreams that we have seen in other works such as Dreamscape (1984), The Cell (2000), the anime Paprika (2006), Vanishing Waves (2012), Real (2013), Incarnate (2016), Lucid Dream (2017) and, of course, the massive hit of Inception (2010). While most of these specialise in depicting surrealistic and distorted happenings or landscapes once we get inside the dream, Nightmare Detective is more akin to Inception in that it takes place in a world that is largely not any different from the everyday one. Indeed, Shinya Tsukamoto deploys the same dank green lighting scheme in both the real world and dream scenes, leaving no distinguishing visual characteristic that indicate the difference between either. The film reaches an ending that Tsukamoto fills with characteristic madly busy handheld camerawork and gore, even family movie flashbacks, which is frenetic, although leaves one not easily able to tell what is going on.

On a more disappointing level, Nightmare Detective feels like a clear attempt to make a more commercial film on Shinya Tsukamoto’s part. While he still writes the screenplay, Nightmare Detective is lacking in the obsessiveness and the wild surrealism that marked his earlier films. All of his other films are driven by a Manichean divide where his characters are fighting against their own bodies being taken over by machinery or as needing to be tortured/punished in order to numb themselves of emotion, where they are fighting against their own socially repressed dark twins or are sinking deeper and deeper into obsession. Nightmare Detective disappointingly only has characters who can enter into dreams and there must deal with a standard villain who has the interesting ability to mutilate himself and cause this to be empathically broadcast to anyone who is drawn into his dream. As a set-up, it lacks the metaphoric strength of Shinya Tsukamoto’s other films.