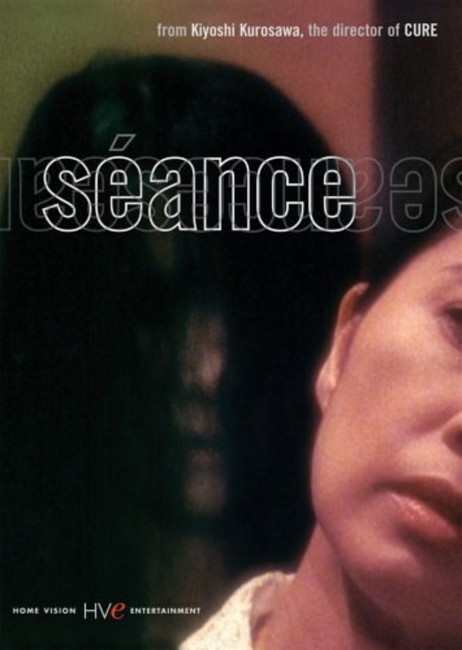 Koji Sato, a sound effects artist for a television company, travels out into the woods to tape some sounds. Yoko, a young girl fleeing from a kidnapper, hides in one of his equipment boxes and Koji inadvertently transports her home with him. The police approach Koji’s wife Junco, a medium, for help in locating the missing girl. Later Junco’s senses lead her to discover the girl in the box in the garage. Junco then has the idea of keeping the girl there and leading the police on a trail, something that will bring her powers notice and deliver her from the tedium of married life. This plan is endangered when Yoko sees Koji’s face. Next, Koji accidentally kills Yoko in a struggle to keep her quiet as the police return.

Some reviewers were quick to compare Seance to The Sixth Sense (1999), both being films that feature mediums who can see the dead. In fact though, Seance is a remake of the British thriller Seance on a Wet Afternoon (1964). Seance on a Wet Afternoon featured Richard Attenborough as a weak-willed husband who catered to his wife, a mentally unstable medium (Kim Stanley), by arranging the kidnap of a child where she would then gain public attention by pretending to locate with her abilities. Seance on a Wet Afternoon was a classic of psychological tension, as much for the way that everything in the plan started to go wrong, as it was for the bared open characterisations of the two kidnappers.

In his version, Kiyoshi Kurosawa substantially changes many parts of the plot. For one, he has the medium’s powers as being actual, whereas Seance on a Wet Afternoon assiduously avoided any hint of the supernatural and left one with the impression that Kim Stanley was probably deluded as to her powers. The characterisations have notably changed. In Seance on a Wet Afternoon, the weak-willed Richard Attenborough went into the scheme to help the mentally unstable Kim Stanley but began to have moral doubts about what he was doing. As in Cure, Kiyoshi Kurosawa is fascinated with the sense of dark buried tensions within marriage and here the wife is the one who advocates the scheme but now it is because she is sick of a dull marriage and wants something more out of life. (As the wife, Jun Fubuki gives a particularly good performance of fragility and vulnerability). Also here the couple seem a good deal more innocent and blameless than they were in Seance on a Wet Afternoon – here they don’t even kidnap the girl, rather they merely take advantage of a situation where the girl, fleeing her kidnapper, hides in an equipment crate and is improbably carried home unnoticed by the husband. Despite the fact that they do end killing the girl (something that never happened in Seance on a Wet Afternoon), the couple here still seem much less blameless and evil than the other couple – the killing here is merely an accident in contrast to the original with Kim Stanley urging Richard Attenborough to kill the girl because she has seen his face.

The most noticeable difference between Seance on a Wet Afternoon and Seance is that one is a psychological thriller, the other is a horror film. The first and the final quarters of this film add completely original material over the book and other film that deal with the wife’s supernatural visions. Here Kiyoshi Kurosawa creates an amazingly haunted atmosphere. There is an incredibly spooky scene where the wife sees a girl in red sitting beside a businessman at a table in the restaurant where she works as a waitress and then moments later the girl casually walks past and we see that she has no legs. Good too are some of the hauntings at the end – the opening of the crate and the emergence of the shadow girl come to slap bloody hands on the husband’s chest; the appearance of the girl’s arm seemingly unattached to anything else coming around the wife’s neck in a restaurant.

Although again, characteristic of Kiyoshi Kurosawa’s films, there are plot elements left unexplained – the appearance of the girl in the red dress is not connected to anything else in the film and is simply forgotten. Why does the husband suddenly develop mediumistic abilities after the girl’s death and he becomes able to see the girl’s ghost rather than the wife? Who is the man he suddenly sets on fire and why?