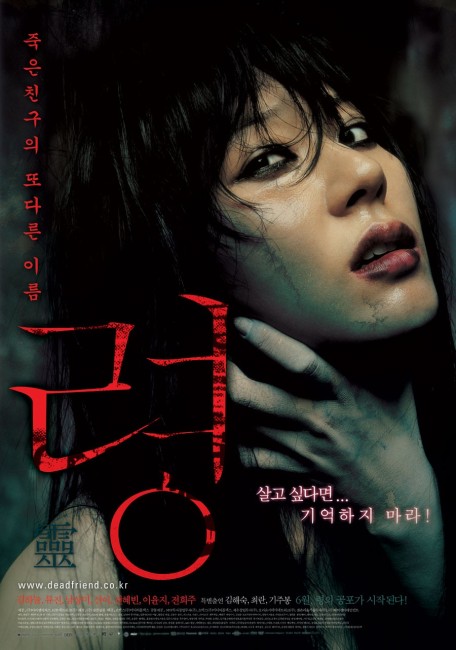 Min Ji-won has graduated from school and is preparing to go abroad to study further much to the resentment of her mother. Two of Ji-won’s school friends are then found drowned in mysterious ways. Ji-won is haunted by a mysterious woman with her long hair across her face. Terrified, she realises that this has something to do with the cruel ways that she and her friends used to treat the shy friendless Han Su-in. However, Ji-won has amnesia about what happened. She tries to find the truth before the ghost girl comes to claim her too.

Dead Friend/The Ghost comes with the undeniable influence of Ring, Ju-on: The Grudge (2003) and their various sequels. Indeed, there are times that all of Dead Friend/The Ghost‘s scares are ones that it has derived from other popular J-horror films – the girl with the long black hair dangling across her face that has become almost a prerequisite for any J-horror film since both Ring and The Grudge; hands sinisterly creeping up from various places a la The Grudge; while the ever-present water keeps making one think of Dark Water (2002). All the moves start to feel standard and by the book. There is the odd effective moment like where one of the girls unblocks a sink, pulls out a huge chunk of hair and then finds water creeping across her feet, before she starts vomiting up water by the bucket load. Most notably though, the drama of the show slows right down in between the various scare set-pieces.

Dead Friend/The Ghost does arrive at an interesting twist ending, where we can see that the filmmakers have made a good deal of effort to create a M. Night Shyamalan-esque left field conceptual reversal a la The Sixth Sense (1999). [PLOT SPOILERS] Here we learn that Han Su-in envied Min Ji-won so much that she wanted to become her while the bitchy Ji-won only exploited their friendship so that she could use Su-in to get through her exams and that after the cruel gag where the girls pushed Su-in into the river, Su-in dragged Ji-won in with her and the two of them managed to swap bodies. We also learn that Ji-won has taken over the body of her mother (Hae-suk Kim).

I am not sure if this is a twist revelation that made 100% sense, nevertheless it is an effective surprise and one that almost makes the rest of the relatively dull and anodyne film worthwhile. Certainly, the lead actress Ha-Neul Kim gives a modestly effective performance vying between sweet innocence and calculatingly bitchy.