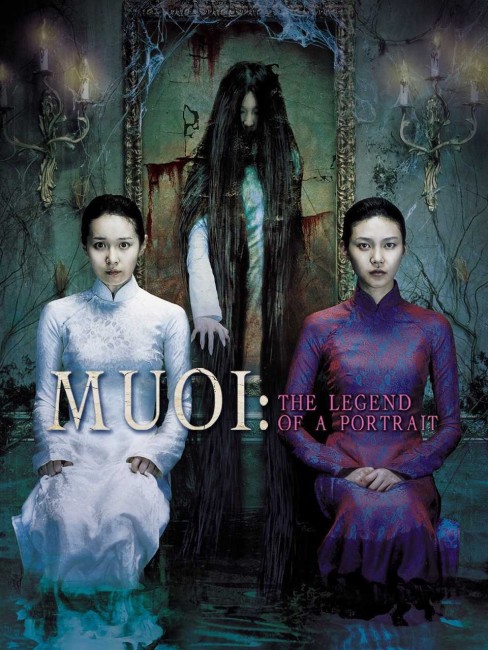 aka Muoi: The Legend of a Portrait

South Korean writer Shin Yoon-hee is wanting to write a book about the legend of the ghost known as Muoi. She goes to Vietnam where her friend Chae Seo-yoon has moved. Yoon-hee wrote a book about their circle of friends in which she called Seo-yoon a slut but feels guilty that she based all of this on rumours. This does not seem to matter to Seo-yoon. Together the two track down the story of the Muoi, a Vietnamese peasant woman who had her portrait painted by Nuen. Nuen’s fiancée became jealous and enacted a horrible revenge by throwing acid in Muoi’s face. Afterwards, Muoi hung herself. Her spirit is reputed to still haunt the portrait. As Yoon-hee sets out to trace the whereabouts of the portrait, it seems to be exerting its influence in the present.

The South Korean ghost story took off as a film genre during the 2000s. This was inspired by the major revival of the Japanese ghost story in the late 1990s with hits like Ring (1998) and Ju-on: The Grudge (2003), a phenomenon that was copied and spread right around much of Asia. The Koreans readily jumped aboard the bandwagon with efforts such as Nightmare (2000), Phone (2003), A Tale of Two Sisters (2003), The Doll Master (2004), Spider Forest (2004), Cello (2005), The Red Shoes (2005) and White (2011) to name the most famous. The influence of the Japanese ghost story of the late 90s/early 00s lies over most of these – the character of Muoi here could be the Ring series’ Sadako in all but name, while the subtitling has a habit of referring to the Muoi’s effect as a ‘grudge’.

The novelty that Muoi has is that it is a Korean horror story but was shot in Vietnam, one of the Asian countries that surprisingly failed to jump aboard the J-horror fad. (This was a Vietnamese co-production deal made by a principally Korean film crew). It is nicely made and you cannot fault it on a technical or cinematographic composition level.

On the other hand, it is a tepid and largely scareless ghost story. The pace is very slow and the film feels a lot longer than its 93 minute running time. Kim Tae-kyun generates a certain atmosphere but never much that builds to anything intensive or pays off. The one scene that holds a nasty bite is the one where Ahn Thu’s Muoi is pinned down by Nuen’s jealous fiancée who drips acid closer to her and then throws it in her face (the latter occurring off screen). The other scene that stands out is where Vietnamese friend Ji-hoon falls off her motorcycle and her scarf is wound up in the wheel strangling her – which stands out for the sole reason it is a more physical death in an otherwise tepid and bloodless story.