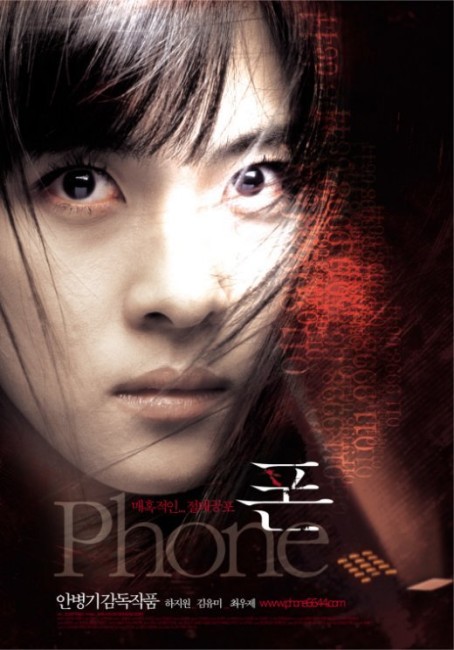 The journalist Ji-won has just published a controversial article exposing an underage sex ring. She now receives harassing cellphone calls and believes that she is being followed. Her best friends, husband and wife Lee Chang-hoon and Ho-jung, suggest that she go to stay at their other house. However, the phone calls continue, even though Ji-won changes her number and the phone company has no record of any caller. Ji-won has also donated eggs so that the barren Ho-jung could have a daughter. The daughter Young-ju now accidentally picks up the phone during one of these calls. Afterwards, Young-ju’s behaviour starts to become increasingly more disturbed. Trying to track down the source of the calls, Ji-won believes that a murdered high school girl Jin-hee is reaching out via the cellphone to exact retribution for her death.

The South Korean-made Phone is another of the films to jump aboard the big Asian horror fad of recent years. Like many of these, it owes strong influence to the Japanese Ring (1998), which started the trend off. There is a reasonable degree of similarity between Phone and one other Ring-influenced film that came out the same year – Takashi Miike’s One Missed Call (2003). As with Ring and other films like Pulse (2001) and One Missed Call, Phone centres around a piece of modern technology – videotape, tv broadcasts, the internet, cellphones – being turned into something malevolent.

Director Byeong-ki Ahn generates some spooky images – an underlit face occluding Ji-won Ha’s reflection in a mirror, or her seeing the ghostly child on her back. One of the spookiest things about the film is the performance given by young Ji-yeon Choi, a child actor with an unnaturally wide face. The film becomes extremely eerie once Ji-yeon becomes possessed, none the more so than the scene where she is about to throw herself down the stairs.

That said, while Byeong-ki Ahn creates spooky moments, Phone seems at best an okay but hardly standout Ring copy. The complaint might be – something that one could also make of Ring – is that for the most part what we enter the film about – haunted tv broadcasts/cellphone calls – is not what the film ends up being, which in both cases is about a murdered girl’s spirit demanding vengeance and the solving of her murder. Similarly here, the initial element about the underage sex ring and Ji-won Ha thinking that she is being followed turns out to be a red herring.

Where Phone does work is in an excellent end revelation. This brings all the elements that have up to that point merely seemed a random part of the background together with considerable cleverness and a beautiful surprise revelation. Indeed, the plot that we end up with makes far more sense than the one in One Missed Call.