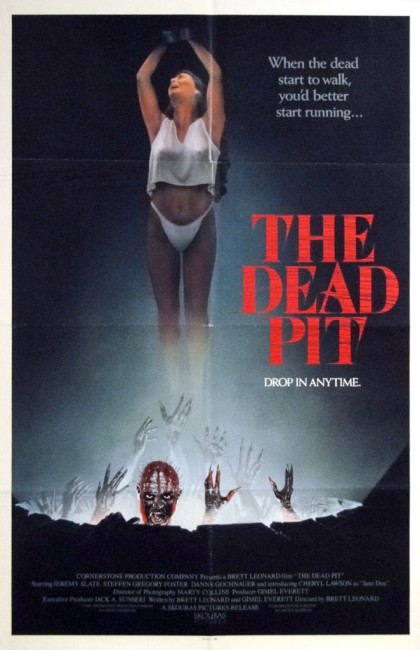 At the State Institution for the Mentally Ill, Dr Gerald Swan discovers his colleague Christian Meyers is conducting abominable experiments with the dead in a disused wing of the hospital. Shocked at what is happening, he shoots Meyers and then has the wing boarded up. Twenty years later, a woman known only as Jane Doe is placed in the hospital suffering from amnesia. She then has visions of Dr Meyers around the grounds. At the same time, staff and patients are being killed. As Jane struggles to remember who she is, the resurrected dead start to pour out of the boarded-over wing.

The Dead Pit was the first film from Brett Leonard. It received minor notice at the time. A few years later, Leonard made The Lawnmower Man (1992), which became a hit because of its then-cutting edge computer animation and popularised Virtual Reality themes on screen, even though the rest of the film was intellectually dead. Leonard made several other films reliant on CGI effects with Hideaway (1995) and Virtuosity (1995), both of which were flops. Leonard then went away to make I-MAX shorts for several years, before returning with Man-Thing (2005), the only Marvel Comics adaptation of the 00s that has failed to get a cinematic release, and his best film to date, Feed (2005) about feeder fetishism, followed by Highlander: The Source (2007), a film so terrible it killed his career for several more years. Although Leonard has announced other projects since then, the only other work he has done has been in documentaries.

The Dead Pit came towards the end of the great era of 1980s horror. This was a period that had revolutionised and popularised the makeup effects driven film and made superstars out of makeup effects artists (see Makeup Effects Vehicles). What it feels like is a film that has been assembled by throwing various 80s horror tropes at a wall and hoping some of them will stick – there’s the partially abandoned asylum; the amnesiac heroine. There are a horde of zombies that could have been imported from Dawn of the Dead (1978) or any of it copies of the period – although if anything the involvement of a mad scientist animating them makes this into more of a copy of Re-Animator (1985).

Brett Leonard certainly delivers lots of gory effects, which were par for the period the film was made. These include scenes of a nurse getting a needle inserted through her eye; a victim having their brain torn open by zombies; and some quite gory zombie meltdown effects. The one scene that was cut in some areas is where needles are poked into doctor Jeremy Slate’s brain while he is still alive.

In terms of his delivery of the various assembled genre tropes, Brett Leonard delivers a strictly average film. There is a good deal of the lighting schemes familiar to the era, piles of gore and stumbling zombies but all of it slips into much of a muchness if you have seen any number of 1980s horror films. The plot feels made from a constructor set with not a lot of thought gone into it. It is, for instance, never explained how Cheryl Lawson became amnesiac and what exactly she has been doing since her father disappeared – has she been amnesiac the entire twenty years?