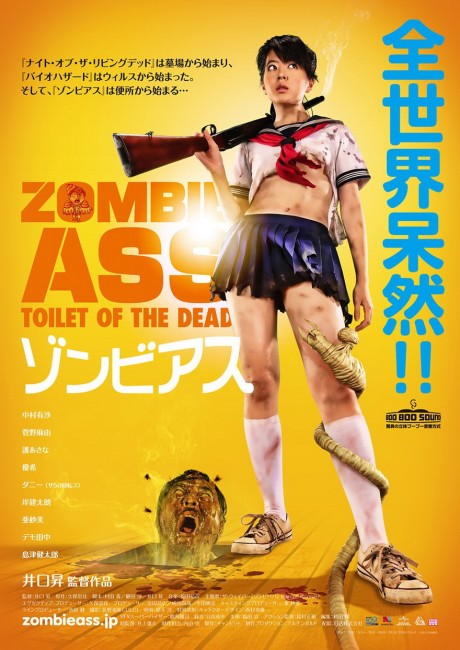 A group of teenage girls and their guy friends drive out into the country. Maki is searching for the tapeworm reputedly used by models to achieve Size Zero figures in the hopes that she can get more work. However, after finding and ingesting the worm, she begins to experience stomach pains. In going to the outhouse, she is attacked by a zombie that emerges from the toilet cistern. Zombies soon pursue the others, manifesting deadly parasites from out of their anuses. The group take refuge with the scientist Dr Tanaka but realise that he has harnessed the parasites in the hope of curing his ill daughter Sachi. What he has not told them is that has also infected the pasta he has fed them with the parasites.

Many of these Japanese gonzo splatter films feel like they involve male directors working out their particular fetishes – as witness the recurrence of heroines dressed in schoolgirl uniforms. Here, for instance, Noboru Iguchi includes a nude girl-on-girl shower with heroine Arisa Nakamura for no other reason than just because. You get the impression that Noboru Iguchi is a scat fetishist (for those not up on their philias, an obsession with shit, asses and related matters). The same obsession also turn up in Iguchi’s segment of The ABCs of Death, which concerns a Japanese schoolgirl who has a lesbian obsession with her teacher’s farts.

In the first major scene here, Asano Mamoru, having eaten a tapeworm in the belief that it will make her thin, must go to the toilet in an outhouse whereupon Iguchi’s camera focuses in on her ass as she pulls her panties down to poop while beneath her in the cistern a zombie looks up as it swims amid the floating shit and then comes up to fetishistically claw at her bare ass. In the next scene, we see Mamoru fleeing a horde of zombies, doubled over in gastric discomfort, farting a noxious yellow gas at them, before a demon forces its way out of her anus.

On the other hand, and certainly in comparison to the other gonzo Japanese horror films, Noboru Iguchi delivers a rather dull film that lacks much focus. For one, it is a film that never has much in the way of a concept, just various elements – zombie things, parasite creatures emerging out of people’s asses, a mad scientist and his daughter – that have been thrown together with little concern for an explanatory rationale driving them. What happens throughout feels very haphazard and ramshackle.

Iguchi gives us plentiful splatter in the form of severed heads, axes in the crotch, severed torsos and the like. On the other hand, these are far less imaginative than the effects that turn up in almost all of the abovementioned gonzo Japanese splatter films. Moreover, rather than physical makeup effects, Iguchi has chosen the route of depicting many of these via cheap CGI. The photography of the film is also shoddy.

The film finds itself in about the last twenty minutes where Yuki gets taken over by a parasite creature that emerges in full form and flies up into the sky, while schoolgirl heroine Arisa Nakamura flies in on clouds of superpowered farts to fight with her in mid-air just like a superheroine.