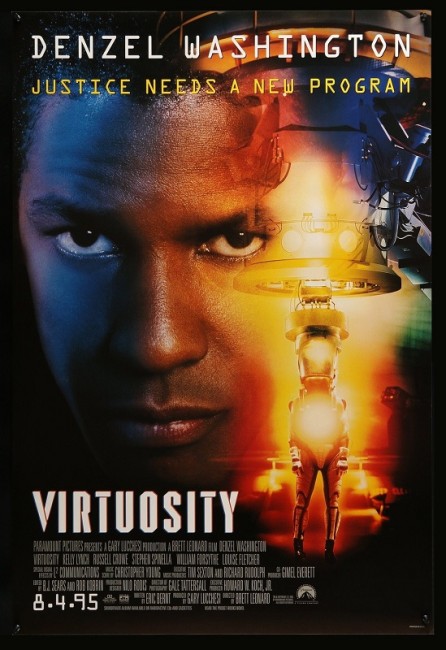 Jailed former cop Parker Barnes acts as a volunteer to test out a new Virtual Reality police training program. Inside the simulation, participants must pursue a serial killer SID 6.7. However, the game’s neural stimulus has been set too high and when SID kills Barnes’s co-volunteer inside the simulation, the shock kills him in real life. The program is ordered shut down. However, creator Daryl Lindenmeyer is too attached to the simulation and fools a lab tech into incarnating the SID chip inside a nanotech android body. In its nanotech body, SID immediately breaks out of the laboratory and goes on a killing spree. The police free Barnes in return for his help, since he has had the most experience dealing with SID. Barnes then discovers that SID has been created with artificial intelligence and a personality that is a hybrid of 180 serial killer profiles. As he starts tracking SID, the personality of Matthew Grimes, the killer that slaughtered Barnes’s wife and daughter, rises to the surface and begins to relish the opportunity for revenge.

Virtuosity was the fourth film from Brett Leonard. After premiering with the mad scientist/zombie film The Dead Pit (1989), Brett Leonard had enormous success with The Lawnmower Man (1992), a stupid film that nevertheless brought Virtual Reality themes and computer animation to screen in a big way. Leonard then followed it up with the dull Dean R. Koontz adaptation Hideaway (1995) and Virtuosity.

Ever since the success of The Lawnmower Man, it seemed that Brett Leonard was aspiring to some self-styled title as a guru of the new CGI effects technology. For a time during the mid-1990s, Leonard was clearly trying to make CGI filmmaking his own niche – in much the same way as say Ingmar Bergman created a niche out of existential gloom or Woody Allen did of neurotic angst. He even created his own CGI house L2 Communications.

Regrettably, Brett Leonard’s work fell far short of the mastery of the form that he aspired to. His films were either so lacking in intellectual content or so bogged down in cliches that all his flashy CGI whiz-trickery proved to be nothing more than eye-candy unsupported by substance. Indeed, Brett Leonard’s films appear so indifferent to plots that in the cases of both The Lawnmower Man and Hideaway, the authors upon whose works the two films are based (Stephen King and Dean R. Koontz) sued to have their names removed from the credits. At least with Virtuosity, Leonard is free of that problem, the film being based on an original screenplay, although it still no less brainless a film.

Virtuosity is so embedded in cliches that it starts to feel like it has been constructed by a design team piecing together elements of the most commercially successful films of the last few years. There is the action hero/cop who is wrongly criminally convicted – a la the likes of Demolition Man (1993), No Escape (1994) and Judge Dredd (1995). As in Escape from New York (1981) and Wedlock (1991), the hero has a bomb implanted in his neck to ensure his compliance with authorities.

There is the killer android – a figure that has become a cliche of almost every B-budget science-fiction film since The Terminator (1984). As with the cliches established following The Terminator, the killer android gets into the killing with exuberant relish – a totally OTT performance from Russell Crowe here. (One scene with Russell Crowe walking though a mall in a new suit while the Bee Gees Stayin’ Alive plays on the soundtrack topples over into self-parody. Just once one would like a film that would feature a killer robot that is emotionless and coldly ruthless). Like the killer android of Terminator 2: Judgment Day (1991), this android is also a shapeshifter.

Nor is the idea of an AI that is a composite of other killers followed up on. You might ask what a program composited of serial killers personalities actually means? Such an idea as presented here displays almost no understanding of psychology. Serial killers are completely dissimilar in motivation and methodology – forensic psychology divides them into two different types, organised and disorganised, for instance. The result in trying to combine these would surely be a program that would be confused and often completely contradictory in what it does. It later becomes apparent that the composite serial killer idea only has one purpose in the film – that of providing another cliche, of the cop having to face the villain from his past. At no point do any other of the serial killer personalities emerge, the Matthew Grimes personality from Denzel Washington’s past quickly becomes the dominant one and stays that way, while all the other personalities are conveniently forgotten about.

In another piece of idiotic motivation, something that Virtuosity is filled with, the AI’s creator, for no apparent reason other than that he appears to have an unhealthy relationship with computers, chooses to incarnate his AI as a nanotech robot when the AI program is threatened with closure (has he never heard of backups?) and loose it upon the world, seemingly indifferent to the fact that the program has been designed solely for the purpose of being a killing machine. The sequence does at least contain the film’s best moment – a neat technical demonstration of what nanotechnology is – but the piracy of a good scientific idea does not excuse the cloddishly stupid motivation that it is put to. Not to mention the fact that such technology is far too absurdly advanced for the film’s supposed setting date of 1999.

Denzel Washington is passable but the role is far beneath him – he apparently only took it because his son wanted him to appear in a film that he would want to go and see. Brett Leonard adds a good many explosions, chases and improbable stunts, but he is not particularly adept at directing action and Virtuosity eventually collapses under the weight of its own ridiculousness. Of course, co-star Russell Crowe would later go onto become an A-list star and a Best Actor Academy Award winner – his part as the campy killer AI here is surely Crowe’s worst ever role.

Virtuosity was Brett Leonard’s last feature-length film for a decade. Subsequently, Leonard specialised in directing IMAX theatrical shorts, including the likes of T-Rex: Back to the Cretaceous (1998) and Siegfried and Roy: The Magic Box (1999). He would later return to feature-filmmaking with the unremarkable Marvel Comics adaptation Man-Thing (2005), followed by the fascinatingly perverse Feed (2005) about fat fetishism and the incredibly bad Highlander: The Source (2007).