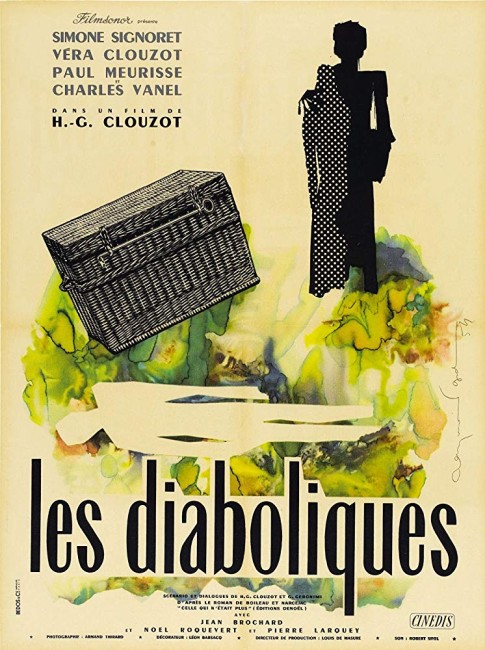 aka The Devils; Diabolique; The Fiends

The autocratic and parsimonious Michel Delasalle runs a French boys’ boarding school that he has brought with his wife Christina’s money. She is a former nun and has a weak heart. Michel treats her cruelly, beating and publicly humiliating her. Michel’s mistress Nicole Horner, one of the teachers, then comes to Christina proposing a scheme to kill Michel off. The two of them travel to Nicole’s hometown during the midterm break where Christina calls Michel to say that she wants a divorce and all of her money back. He rushes there but they have poisoned the glass of wine that Christina gives him and he collapses dead. They dump the body in the school swimming pool, leaving it to be found so that people will think Michel had gotten drunk, fallen in and drowned. But when the body fails to surface, Christina becomes increasingly anxious. However, when she has the pool drained, it is empty. Mysterious happenings convince her that Michel is alive and taunting her.

Les Diaboliques – which is sometimes translated as The Fiends or The Devils but is mostly known in English under its French name – has deservedly become a classic of the genre. Besides the fact that it is a great film, Les Diaboliques is of enormous importance to the genre in that it served as the template upon which most of the psycho-thrillers that were made in the aftermath of the success of Psycho (1960) – Hammer films like A Taste of Fear (1961), Nightmare (1964), Hysteria (1965) and Fear in the Night (1972) and sundry William Castle films, especially The Night Walker (1965), and Francis Ford Coppola’s Dementia 13 (1963), Curtis Harrington’s Games (1967) and Dominique (1978) – were based.

These films outrightly stole Les Diaboliques‘ formula of setting up macabre and seemingly supernatural events that a young woman is usually dragged into, which are then turned around to be revealed as absurdly complicated schemes to have her declared crazy and/or kill her off. Most of these films are borderline horror – indeed, one is cautious to classify Les Diaboliques as outright horror (although ironically had it been made in the aftermath of the genre it inspired it would be unquestioningly so labeled).

As a film, Les Diaboliques is exceptional, a model that has never been surpassed by any of its imitators or remakes. Henri-Georges Clouzot and screenwriters crank up suspense at a gruelling intensity – the return home with the dead body comes with so many hiccups – the trunk starting to open as they carry it down the stairs; the drunken soldier who insists on getting into the back of the van; the blood that the innkeeper sees coming out of the trunk; the light that comes on in the school house just as they attempt to dump the body in the pool; the cranky neighbour who becomes irate about being disturbed and writes the times everything happens down.

The twists that we are subsequently propelled through – of the body not appearing in the pool as expected and the increasing anxiety – prove nerve-wracking in the tension generated. Clouzot proves a master at generating suspense via his cast who are all excellent. The shot that closes on Vera Clouzot as she just stands there and lets Paul Meurisse drink the wine is great.

The twist ending is shocking – the end credits even ask one not to give it away, which this reviewer will respect. The lead up to it is a fine evocation of a mood of pure dread – phantom typewriters, dead bodies rising from the bath and the heroine in a flimsy nightgown – that seems to look forward to the fake supernatural events plots that many of the imitators used. Certainly, if approached logically, the twist is founded on an absurdly contrived house of cards – although it does remain within the realm of possibility unlike many of the subsequent imitators. The measure of Les Diaboliques‘s effectiveness though is that one never questions the twist but rather is taken by the shock reversal it holds.

There were two tv movie remakes, Reflections of Murder (1974), directed by John Badham and featuring Joan Hackett in the Vera Clouzot role, Tuesday Weld in the Simone Signoret role and Sam Waterston as the husband; and House of Secrets (1993), directed by Mimi Leder featuring Melissa Gilbert and Kate Vernon in the respective roles and Bruce Boxleitner as the husband. The film underwent an atrocious English-language cinematic remake as Diabolique (1996) starring Isabelle Adjani in the Vera Clouzot role and Sharon Stone in the Simone Signoret part. Among many of its suspenseless butcherings, the remake offered a happy, upbeat ending.

Henri-Georges Clouzot never directed any other genre films. His one other classic work is the gruelling suspense film The Wages of Fear (1953) about truckers driving vehicles laden with nitro-glycerine through unstable South American terrain. Les Diaboliques was based on a 1952 novel by two popular French thrillers writers Pierre Boileau and Thomas Narcejac. Boileau and Narcejac also wrote the books that became the basis of Alfred Hitchcock’s reincarnation thriller Vertigo (1958) and the transplanted limbs horror film Body Parts (1991), as well as the screenplay for the classic French mad surgeon film Eyes Without a Face (1959).